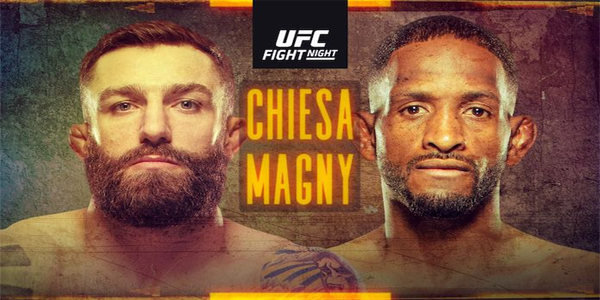 Fight fans really don’t have to wait long for the next UFC card. In fact, it will be a midweek affair on ESPN with the UFC on ESPN: Chiesa vs. Magny card. This is a Wednesday night event at the new Etihad Arena on Fight Island over in Abu Dhabi.

After a really successful, KO-filled ABC card on Saturday, Dana White will hope to keep the momentum going with this set of matchups. This is a big card in advance of Saturday’s UFC 257 mega card with the return of Conor McGregor. This is an afternoon card with a 9 a.m. ET start time for the prelims and the main card is expected to start around noon.

It will be interesting to see how the ratings come in for this one, as a lot of people are still working from home as a result of the pandemic, but there are also a lot more people back in their offices or on-site these days. It is a gamble from Dana White, but with a smattering of fans allowed at Etihad Arena, it’s a primetime card in Abu Dhabi.

There are a ton of matches on this card and we’ll hit all of them with help from the odds at BetOnline Sportsbook.

UFC newcomer Manon Fiorot has been bet into a big favorite against Victoria Leonardo, who earned a contract from her win over Chelsea Hackett on the Dana White Contender Series back in November. She’s got more of a track record with North American fans after fighting with Invicta for a couple of years, but Fiorot has taken the money here. She’s more of a knockout artist, while Leonardo relies more on the ground game. Frankly, very little is known about either of these fighters and it’s hard to lay a big price like that, but respecting the smart money makes sense here.

M-1 bantamweight champion Sergey Morozov will attempt to shake off a long absence to take on Umar Nurmagomedov. Morozov hasn’t fought since October 19, 2019 when he held his M-1 title against Josh Rettinghouse. Morozov may be a familiar name to some after losing his first title shot to UFC fixture Movsar Evloev in 2018. That is one of Morozov’s four career losses. Nurmagomedov is a massive favorite here with a perfect 12-0 record. This is his long-awaited UFC debut after having some dates canceled last year. I wouldn’t step in front of him here, despite the big number.

Cage Warriors lightweight champ Mason Jones will make the leap to UFC to face Mike Davis in his first fight. Davis has two losses to his name and both are reasonable, as he was beaten by Gilbert Burns in April 2019 and Sodiq Yusuff on the Dana White Contender Series. Jones is 10-0 in his career with four knockouts and three submissions. Davis hasn’t fought since October 2019 when he beat Thomas Gifford for his first UFC win. Some underdog money has shown on this fight and I tend to agree.

Money has come in on Francisco Figueiredo for this flyweight fight against Jerome Rivera. Figueiredo is 11-3-1 in his career, which has included some stops in Jungle Fight, one of the better Brazilian MMA promotions. He also hasn’t fought since September 2019. This card seems to feature a lot of those. Rivera lost to Tyson Nam last time out in a big step up in class. One of his other losses was to Brandon Royval when he suffered an injury 40 seconds into their fight. The over makes sense here, as both guys excel on the ground and will be fighting for top control, but laying -200 on a total seems risky. Once again, with a couple of relative unknowns, we probably need to respect the steam on Figueiredo.

Finally some familiar names for UFC fans. Markus Perez may not be a familiar name for long. He’s lost three of his last four fights including a really ugly loss last time out to Dricus Du Plessis, who was making his UFC debut. It was the first KO loss of Perez’s career, but he has really struggled of late. We haven’t seen Dalcha Lungiambula in a while, as his most recent appearance was a loss to Magomed Ankalaev in November 2019. Perez has the size edge here and the better ground game. The +120 price looks pretty attractive here for a guy that should have his back against the wall.

Su Mudaerji is a big favorite here against Uzbekistan native Zarrukh Adashev. Adashev lost to Tyson Nam back in June in his UFC debut after three wins in Bellator. Mudaerji was victorious in just 44 seconds against Malcolm Gordon in November, so this is a bit of a quick turnaround, but he took no abuse in that win. This is a huge line, probably deservedly so for the 24-year-old Mudaerji. He’s had some moments of inexperience in the cage, particularly in his debut fight against Louis Smolka, but he’s not taking on a veteran fighter here.

Dana White keeps putting these cards together, but it doesn’t mean that they are good. Ricky Simon is yet another big favorite on the board here against Gaetano Pirrello. Simon needs an easy win here. It was a struggle against Ray Borg last time out and that was on the heels of two losses to round out 2019. Pirrello should fit the bill as the Belgian makes his UFC debut for his first fight in 15 months. This is an enormous step up in class for the 28-year-old, even if Simon is a fringy UFC talent.

This should be a good middleweight battle between Omari Akhmedov and Tom Breese. This fight was supposed to take place last week, but was moved to this card. Breese has the size advantage here and Akhmedov is coming off of his first loss in more than four years to Chris Weidman. Each of the last seven fights for Akhmedov has gone the distance so the -155 on the over could be a good value buy. On the other hand, each of the last three fights for Breese has ended in a first-round knockout. This is a step up in class from those other opponents, though. Breese could really be tested here. He knocked out KB Bhullar in the Canadian’s first UFC fight and Breese was getting beaten up badly by Brendan Allen before catching a couple openings. I like the underdog here in Akhmedov at +136.

The main card begins with Douglas Silva de Andrade and Lerone Murphy. Here we have another big favorite in Murphy with over a $3 line. Murphy is undefeated with his lone blemish a draw against Zubaira Tukhugov at UFC 242. He won his only fight last year against Ricardo Ramos. We haven’t seen Andrade since November 2019.

That could be playing a big role in the line here. The 35-year-old Andrade has split his last four fights and it has been 14 months since we’ve seen him in the Octagon. I still wouldn’t lay Murphy against a veteran of 29 pro fights. He’s got 19 knockouts to his name and has only been knocked out once. His experience should keep him in this fight, but the +250 price is still a big ask with a much faster, more powerful fighter on the other side.

Tyson Nam’s name has come up a lot already having recently fought some of the other guys on the card. Now we get to his fight against Matt Schnell. Nam has beaten some UFC newcomers and lesser fighters in his last two matchups against Zarrukh Adashev and Jerome Rivera. When he fought fixtures like Kai Kara-France and Sergio Pettis, he lost.

Schnell falls more into that second category. The 31-year-old last fought in December 2019 and lost to Alexandre Pantoja, but he was great in the UFC up until that point. This is a striker vs. grappler matchup, as Nam wins by KO and Schnell wins by submission, so we have a good contrast of styles here. Nam’s takedown defense has been pretty good in most of his UFC fights and he’s had issues with the striking of Kara-France and Pettis. He shouldn’t have those issues with Schnell.

Is it fair to say that we never really know what we’re going to get from Roxanne Modafferi? In nine UFC fights, she is 4-5, but she did upset Maycee Barber. Of course, Barber also tore her ACL early in that fight, which completely changed the dynamic. There are a lot of reasons why Viviane Araujo is the -325 favorite here. That being said, Araujo, who is 3-1 in UFC, really hasn’t fought many top fighters or many consistent UFC fighters. Modafferi has a much more impressive list of opponents, including going the distance with Jennifer Maia and Lauren Murphy.

I think this line is too big. Araujo probably wins, but Modafferi is a veteran that has a lot of cage awareness and Araujo, despite being 34, really hasn’t fought a lot of strong competition in the UFC to this point. This could end up playing out like the UFC 245 fight against Jessica Eye, a veteran who was a more active and more accurate fighter with big strikes and a multi-faceted attack.

Vinicius Moreira badly needs a win. Most of the Dana White Contender Series finds have done okay, but Moreira has lost all three fights since earning his contract. This might be the last fight that he gets, especially going 16 months between fights. This is a step down for Moreira, who has lost to Paul Craig, Eryk Anders, and Alonzo Menifield. Maybe he was thrown into the fire too soon. We’ll find out here because the 31-year-old absolutely has to win this fight.

Ika Villanueva has both of his UFC fights, so we can say the same about him. Chase Sherman beat him in May and then the doctors had to step in and stop the fight against Jordan Wright last time out. Both of these guys have been underwhelming to put it nicely. The 36-year-old Villanueva may be running out of chances. Moreira can at least catch on somewhere else, but his submission game against the poor takedown defense of Villanueva should give the underdog the chance to redeem himself here.

Warlley Alves will be shaking off a lot of cage rust here as he returns for the first time in 14 months to face Mounir Lazzez. Alves last lost by submission to Randy Brown. Lazzez won his UFC debut last time out with an impressive victory over Abdul Razak Alhassan, but that was also Alhassan’s first fight in 22 months after some legal issues.

This is a big line for a talented prospect in Lazzez, but Alves is also a very accomplished fighter in his own right. He still hasn’t faced the top guys in his division since joining UFC, but at least he’s been there. Lazzez has a ton of talent, but his first fight may have just been a perfect storm scenario. We’ll find out. To me, the best play here is the under, as Alves and Lazzez are both active strikers that will keep pressing forward.

No total is listed for this fight at BetOnline with Neil Magny favored over Michael Chiesa. The 33-year-old Magny was a decision machine last year with 15-minute wins over Li Jingliang, Anthony Rocco Martin, and Robbie Lawler. We haven’t seen a lot of Chiesa of late, but he did beat Rafael dos Anjos in his opponent’s move to welterweight last time out.

Magny just seems like a safer, more consistent bet here. Nothing against Chiesa, who has had a fine MMA career, but he’s had a lot going on, including some tough weight cuts and long layoffs. At 33, Magny might currently be fighting the best that he has in his career. Chiesa will have to finish him for the win in all likelihood, so if you like the dog, look at Chiesa by submission to sweeten the price. Otherwise, Magny by decision makes the most sense.