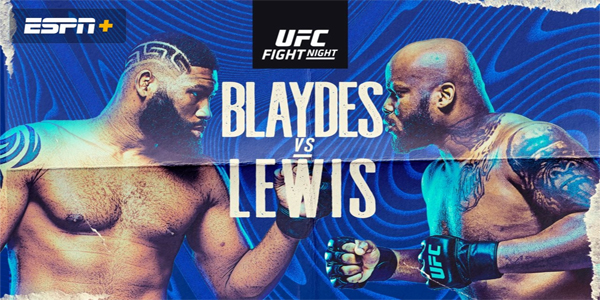 The show goes on in the UFC. It seems like we’ve had a UFC card every weekend since the sport returned in May and fight fans have certainly been thrilled to have something to get excited about.

UFC 255 featured two title fights. UFC Vegas 15 does not, as the promotion is once again back at the UFC APEX for Fight Night 184. Like we’ve talked about before, there are a million different names for these promotions. UFC on ESPN 18 features a main event between Curtis Blaydes and Derrick Lewis. Anthony Smith will also be on this card, which is a little light on name value, but there should be some good betting value.

We’ll examine the card with odds from BetOnline Sportsbook with thoughts on each of the fights. The card goes off on Saturday November 28.

Great promotions are going off all week at BetOnline Sportsbook and we encourage you to check those out.

Luke Sanders hasn’t been heard from in a long time. In fact, you have to go back to February 17, 2019 against Renan Barao for the last time Sanders was in the Octagon. He’ll return here as a short favorite against Nate Maness, who won his UFC debut back on August 1 over Johnny Munoz. This will be a catchweight fight, as Maness will come in as the bigger fighter. Sanders had lost three of four before the Barao fight, but has not fought in a long time. Early action has been on him, but I don’t see a great edge in the first fight.

Su Mudaerji is a big favorite here against Malcolm Gordon in what will be a flyweight fight. Gordon lost to Amir Albazi back in July in his UFC debut. He had won three straight in TKO, but he stepped up in class against a UFC-caliber opponent in Albazi and lost and now faces a guy in Mudaerji that has two UFC fights under his belt. Like Sanders, Mudaerji is on a long layoff, having last fought on August 31, 2019. Again, just like the first fight, it’s hard to get a read on this one with a superior fighter on a long layoff against a subpar fighter that should be in better rhythm. Mudaerji is a money line parlay piece at best.

This was a late addition to the card with some mixing and matching. Kai Kamaka III was victorious in a short notice debut over Tony Kelley at UFC 252 with an impressive performance. Jonathan Pearce got signed after being on Dana White’s Contender Series, but then lost to Joe Lauzon earlier this year. Pearce is a big underdog here and Kamaka is a parlay piece with another fighter later down the card in Su Mudaerji.

Yet again, we have another fighter that hasn’t been in action in forever. Rachael Ostovich will shake off 22 months of cage rust to take on Gina Mazany. Ostovich hasn’t been seen since she lost to Paige VanZant back on January 19, 2019 by submission. It was her second straight submission loss and her third in four fights. The 29-year-old draws a fighter in Mazany that has a side advantage and has also fought twice in 2020. The 32-year-old Mazany was knocked out in just 22 seconds by Julia Avila back on June 13. Her win came in KOTC in January after losing her spot in the UFC. Ostovich hasn’t fought because she tested positive for ostarine. Both fighters have a lot on the line here, but Mazany seems to have a better chance at success.

Let’s see if the third time is the charm for 5-foot-5 bantamweight Anderson Dos Santos. Santos is 0-2 in the UFC. He is another fighter on this card that has not fought in a long time. His last fight came on June 22, 2019. Nad Narimani and Andre Ewell both beat Santos at 5-foot-8. Martin Day is 5-foot-10, so it seems like it could be a challenge for Santos once again here as he faces a big size disadvantage. Day was pretty clearly trailing Davey Grant at UFC 251 before getting knocked out late in the third round. Day is a very active striker. If he can keep Santos at distance, then he’ll win this fight. If you want to take Santos, consider him by submission since he has 11 wins by that manner.

The biggest fight of Norma Dumont’s career wound up being a disappointment. She lost to Megan Anderson back in February in her UFC debut by first-round knockout. It will be interesting to see how Ashlee Evans-Smith looks here as she moves back from flyweight to bantamweight. She was 1-1 as a flyweight with a win over Bec Rawlings in her first fight and then lost to Angela Lee. The theme of this card seems to be long layoffs, as Evans-Smith has not fought since February 17, 2019. It is fair to question whether or not Dumont is UFC quality, but Evans-Smith is borderline herself. This seems like another tough fight to call.

Bill Algeo was in a terrible spot against Ricardo Lamas last time out. He wound up being a late replacement for the fight and had just two weeks to recover after going a full 15 in CFFC with Tim Dooling. That was back on August 29, so Algeo has had some more time now to be prepared. He’ll draw Spike Carlyle here in a featherweight fight. Carlyle, who is 1-1 in UFC to this point, is giving up some size, but does seem to have the higher ceiling and higher pedigree. Carlyle was comfortably beaten by Billy Quarantino back in May, but he should be better equipped for this fight.

This has some fight of the night potential. The undefeated Miguel Baeza will get a stiff test here from veteran fighter Takashi Sato. Baeza is still the clear-cut favorite here, but Sato, who made his name in the top Asian promotion of Pancrase, is 2-1 in the UFC. His loss to Belal Muhammad was probably the best opponent he has seen to this point, but Baeza could very well change that.

This line probably gives a bit too much respect to Sato in all honesty. Baeza is 9-0 with seven knockouts and has not taken a whole lot of punishment in his three UFC appearances. Sato has only been knocked out once, but Baeza has a big size edge here and should be the quicker fighter as well. In the smaller UFC APEX cage, that should be a big help.

Amir Albazi got his UFC shot after paying his dues in Bellator and Brave on July 18, 2020. He made the most of it with a submission win over Malcolm Gordon in the first round. He’ll get a huge shot here against Zhalgas Zhumagulov. The 32-year-old Zhumagulov also got his UFC shot in July, but he lost to Raulian Paiva at UFC 251. The former Fight Nights Global champion, who had a win over Tyson Nam, to win the title, also had a defense against Tagir Ulanbekov, who made his UFC debut last month.

This is a great fight as well. Albazi has only lost to former Titan FC champ and UFC fighter Jose Torres. Zhumagulov has some losses on his ledger, but he’s been strong over the last few years. Still, Albazi looks like the sharper of the prospects here and it feels like this is a match made by Dana White to elevate one of the two fighters and Albazi has the higher ceiling.

Josh Parisian is actually not from Paris. The 31-year-old heavyweight got some exposure with a first-round knockout of Chad Johnson on Dana White’s Contender Series in August and that was enough for a full UFC appearance here against Parker Porter. Porter, a loser to Chris Daukaus in his debut at UFC 252, looks to be up against it here.

Parisian is the bigger fighter with a reach advantage. Porter has six losses to his name, including one to a guy you may have heard of named Jon Jones all the way back in 2008. Jones knocked him out in 36 seconds. Porter’s ground game could be the only stumbling block for Parisian in this fight, but Parisian has five wins since August 31, 2019 and he seems to be coming into his own.

Devin Clark was originally supposed to face Shamil Gamzatov, but visa issues brought Anthony Smith into the mix. Smith is a short favorite here against Clark as he looks to get back in the win column. Smith has lost three of his last four, though Jon Jones, Glover Teixeira, and even Aleksandr Rakic are all most accomplished than Clark. Clark even lost to Rakic by first-round KO at UFC 231.

This is a good fight to see where Smith stands at 32. He needs a win badly. It doesn’t matter if it comes against a guy like Clark or a better fighter. The fact is that Smith was trying to talk about a title shot before the Rakic fight and he was not competitive at all in that fight. In fact, you can tell how bad his performance was by this line. This is a step up in class for Clark from a name standpoint, if Smith can turn back the clock. I think he can. Frankly, he needs to.

You know, I said this prior to the Curtis Blaydes fight back in June against Alexander Volkov, but I don’t think people realize how good this cat is. Blaydes has two career losses and both are to Francis Ngannou. Blaydes has some of the best wrestling in the heavyweight division and he’s shown it a lot lately, including a dominant effort against Volkov.

I also think when his career is done, we’ll realize how good of a fighter Derrick Lewis was. Lewis actually has the UFC record for most knockouts after putting Alexey Oleinik down 21 seconds into the second round. Lewis has managed not to get knocked out by wrestlers like Ilir Latifi and Blagoy Ivanov, so I would assume he could prolong this fight, but the gas tank just won’t be deep enough for Lewis. Volkov had a lot of strikes, but Blaydes still wore him down. I would expect this fight to play out similarly.