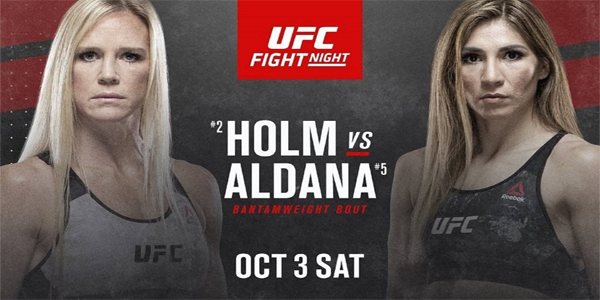 The win for Israel Adesanya over Paulo Costa wrapped up the highly anticipated UFC 253 card. We’ll wait a few weeks for another pay-per-view, but we don’t have long to wait for the next UFC card. UFC on ESPN 16 comes to you on October 3 from Fight Island in Abu Dhabi and features a main event of Holly Holm against Irene Aldana.

There have been tons of changes to this card for a variety of reasons, but as we look on Wednesday, there are 11 fights scheduled for the card, with the final five on ESPN. The entire card can be seen on ESPN+. It will start at 7:30 p.m. ET, which is in the early morning hours in the United Arab Emirates.

We’ll take a look through the fight card with odds from BetOnline Sportsbook as we survey the 11 fights and spend a little more time and attention on the main card.

Luigi Vendramini and Jessin Ayari get us started at 155 pounds in the lightweight division. Ayari has been bet into the -118 favorite after opening an underdog in the bout. The over 2.5 is juiced to -155, as all three of Ayari’s UFC fights have gone the full 15. Vendramini was knocked out in his UFC debut by Elizeu Zaleski dos Santos, but that fight came over two years ago. He was 8-0 with eight stoppage wins to that point. The longer this fight goes, the more it favors Ayari, who has more experience going three rounds. The over juice implies that this fight will go to the cards and that should help Ayari.

Bantamweights Casey Kenney and Alateng Heili are next up at 135 pounds. Kenney bounced back from his second career loss at the hands of Merab Dvalishvili to get Louis Smolka to tap out back on May 30. Heili is 2-0 in the UFC, but the 28-year-old from China has not fought since last December. Kenney is a big -305 favorite and looks like a parlay piece as he should win and we can cut into the juice with someone else on the ticket.

The first of three women’s fights on the card features Loma Lookboonmee at -140 against Jinh Yu Frey. The 35-year-old Frey is just 9-5 in her career and she lost her UFC debut back in June to Kay Hansen. It was also the debut for the 21-year-old Hansen. Frey was an Invicta champion before getting her chance with the UFC. Lookboonmee is 1-1 in her UFC career and the 24-year-old is fighting for just the seventh time in her career. We just saw Frey lose to a younger, faster fighter, which is probably why we get a -140 price when that seems a tad high.

Three-time Dana White Contender Series contestant Jordan Williams finally gets his shot on a full-fledged UFC card. He is the -142 favorite at 185 pounds against Nassourdine Imavov. Imavov is making his UFC debut after posting an 8-2 record with seven stoppage wins in smaller promotions. Williams at least has Bellator and DWTNCS experience. Williams just fought on September 15 and will be right back in the Octagon here. Not much is known about these two fighters, but Williams did just recently fight and Imavov has not fought since December. I’d give Williams the nod on that alone.

The fourth UFC fight for Charles Jourdain might be the one to get him back to .500 in the UFC. Jourdain knocked down Andre Fili in the first round of his last fight back on June, but he lost via split decision. Now he is a -454 favorite in one of the most lopsided lines of the night against Joshua Culibao. The 26-year-old Culibao was 8-0 before Jalin Turner beat him up back in February. Turner landed 90 strikes to Culibao’s 12 and spent able time with control. That performance is why Culibao is a huge underdog here and deservedly so.

Maybe it’s time for Carlos Condit to hang ‘em up. Condit is in the main event of the prelims against Court McGee as he looks to end a five-fight losing streak. Condit has lost eight of his last 10 fights dating back to 2012. McGee is a step down in class in some respects to who Condit has fought, but he also hasn’t fought since December 2018 and the 36-year-old isn’t getting any younger. McGee has been bet into the -136 favorite, even though the 35-year-old has lost four of his last five against weaker competition. Neither one of these fighters is worth your money here.

Undefeated Dusko Todorovic did enough to impress Dana White last August against Teddy Ash on the Dana White Contender Series to get an opportunity on a full-fledged UFC card. That opportunity is here, as the 26-year-old Serbian gets into the cage as a big favorite against Dequan Townsend. Townsend has lost three straight fights, including one on very short rest against Devin Clark in February, less than a month after losing to Bevon Lewis.

Townsend should be in a better spot here, but he hasn’t shown anything at the UFC level that would suggest that he’s here to stay. The 34-year-old is a big underdog despite more UFC experience and a size advantage. It seems like Todorovic is set up for an easy first win and a better opponent down the line.

This looks like another uncompetitive fight. Kyler Phillips is nearly a $5 favorite against Cameron Else. Phillips was supposed to get a good test from Danaa Batgerel, but Batgerel cannot complete the travel to Abu Dhabi. Else, who has won six fights in a row and did make a cameo appearance on a Bellator card in 2016, isn’t being given much of a chance here.

Phillips is hardly invincible with a loss to his name and a full 15 with Gabriel Silva on his first UFC fight card. I’m not saying I’d take the +375, but I certainly wouldn’t lay the -475.

Since joing the UFC, Julianna Pena has one loss. It came against Valentina Shevchenko and there is absolutely no shame in losing to her. If we are to believe the odds and the line movement here, this will be her second loss. Pena has only fought once since that Shevchenko loss in January 2017, so you can understand why the markets are skeptical. She beat Nicco Montano on July 13, 2019, but that was her last fight.

Germaine de Randamie went 25 minutes with Amanda Nunes back in December. That loss snapped a nice little run for her that included wins over Holly Holm, Raquel Pennington, and Aspen Ladd. Going 25 with Nunes is an accomplishment in and of itself, even though Nunes was a clear-cut winner in that fight. I hate to be chalky here, but between the line move and the lack of reps for Pena, you have to agree with what the wisdom of crowds is saying about this fight.

This is a big spot on the big stage for Carlos Felipe. Felipe was unblemished at 8-0 before he came up short against Sergei Spivac back in July in his UFC debut. It was a big step up in class for the 25-year-old and he’s sure to have learned from that majority decision loss. Spivac was far more active and landed nearly four times the strikes that Felipe did. We should see a much more active heavyweight in this one.

Unfortunately for Felipe, de Castro will likely be more active coming off of his first career loss at the hands of Greg Hardy. De Castro was 6-0 and 2-0 under Dana White’s watchful eyes before that loss at UFC 249. de Castro only landed 24 strikes in what was a pretty boring fight overall. This could be a boring heavyweight fight, too, if these guys don’t make some adjustments. The over 1.5 is actually my pick here with two guys that don’t seem to throw a lot of shots.

Irene Aldana had a battle with COVID-19 back in July that pushed this fight back until the first weekend of October. It will be the headliner on Saturday night and Holly Holm is a small favorite in the fight. Holm is just 3-5 in her last five fights, but her losses have been to Amanda Nunes, Cris Cyborg, Germaine de Randamie, Valentina Shevchenko, and Miesha Tate, who are some of the best that women’s MMA has ever had to offer.

Is Aldana in that group? Save for her loss against Tonya Evinger, this is the most accomplished fighter that Aldana has faced in her career and Evinger never had the UFC success that Holm had. In fact, Evinger went 0-3 in the UFC. Still, Aldana is the younger and faster fighter. Holm, who has eight career knockouts, only has two since the start of 2015. With this one likely to go to the cards, you look at who will be more active and put on the better show. To me, that looks like Aldana.