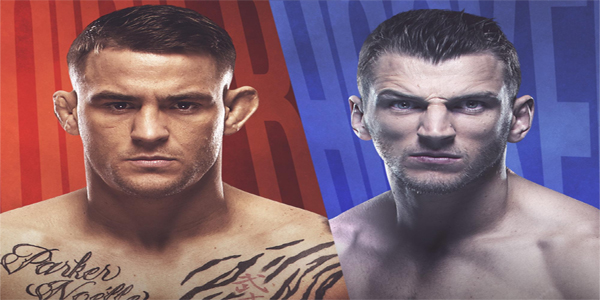 The calm before the storm. That seems like a good way to describe UFC on ESPN 12. It isn’t a bad card by any means, but it certainly doesn’t have three title fights like UFC 251 on Yas Island in Abu Dhabi. The Fight Island card has a lot more big matchups and more general intrigue, but that doesn’t mean bettors should bypass the UFC on ESPN 12 card.

This one will be held at the UFC APEX once again with a main event between Dustin Poirier and Dan Hooker. There are 11 fights on the card in total, which can be seen in its entirety on ESPN. Only the last four fights are on the “main” card, so we’ll dig a little deeper on those, but cover all 11 matches.

Odds are from 5Dimes Sportsbook, but be sure to shop around for the best prices.

Featherweights Jordan Griffin and Youssef Zalal start things off at 145 pounds in what will be the second career UFC fight for Zala and the fourth for Griffin. Zalal has been moved to a slight -115 favorite with a total of 2.5 heavily juiced to -170 on the over. This is a step down for Griffin, whose UFC career has included losses to Dan Ige and Chas Skelly. Griffin did beat TJ Brown for his first win, but it hasn’t garnered a ton of favor in the markets. Zalal beat Austin Lingo to improve to 8-2 in his MMA career. Both fighters spent ample time in LFA, but never crossed paths until now.

After that opening toss-up fight, we get our first women’s fight. It will be Jinh Yu Frey and Kay Hansen at 115 pounds. This is the UFC debut for both ladies, as they each make the leap from Invicta. Hansen is just 6-3 in her career, but she has been installed as the -145 favorite here. The total is -300 on over 2.5, so that isn’t really an option for this one. The 35-year-old Frey was the champ in LFA, but it was controversial and she failed to make weight in her title defense. Hansen, meanwhile, is only 20 and just at the start of her career. Who knows what we’ll get from these two, as both bring questions to the Octagon.

Takashi Sato will try to get back over .500 in the UFC in his fight against Ramiz Brahimaj. Sato is 1-1 with a win over Ben Saunders and a loss to Belal Muhammad. Brahimaj is making the jump from LPA as well, where he suffered both of his losses. He is 8-2 and all eight wins have been via submission. Sato is more of a KO artist and has tapped out twice. Sato is the -130 favorite for a stronger body of work, but the way to probably look at this fight is Sato by KO/TKO or Brahimaj by sub. Sato has three decision wins to his name and none in his last eight fights.

A catchweight fight at 150 pounds will follow between Kyle Nelson and Sean Woodson. Woodson is a perfect 7-0, including a Dana White Contender Series win and a unanimous decision triumph over Kyle Bochniak. The 28-year-old Woodson is long and lanky for this division at 6-foot-2 and he has a big reach advantage over Nelson. That would seem to be part of the -245 line on the favorite here. The total is 2.5 with the over at -125. Nelson is 1-2 in the UFC to this point, with a knockout win over Polo Reyes last time out back in September. The size advantage may be too much for him to overcome here.

The first of two heavyweight fights on the card features Philipe Lins and Tanner Boser. The 34-year-old Lins lost his UFC debut to Andrei Arlovski in a stand-up fight. Lins was the champ in PFL when he made the move to UFC, but he didn’t showcase a whole lot of striking power or fight IQ in the loss to the veteran Arlovski. Boser is 1-1 in her UFC career, with both fights going the distance. He managed to stay away from Ciryl Gane long enough to go the distance, but lost 30-26 on each card and took some punishment. Lins is -115 here in a rare heavyweight fight juiced -225 to the over 2.5. Neither fighter seems like a great bet here. This is a true toss-up.

Miranda Maverick may have the best fighting name in the women’s division. The 22-year-old will make her UFC debut against Mara Romero Borella. This is a quick turnaround for Borella, who just lost to Cortney Casey on May 16. She has dropped four of her last five fights. As a result, Maverick, despite her relative inexperience, is the -300 favorite. Maverick had some issues making weight earlier in her career, but she’ll fight at 125 pounds here and is a big favorite for a reason. She looks like a promising prospect.

The last fight on the “prelim” card features Luis Pena and Khama Worthy. Pena is a -270 favorite here with a total of 2.5 juiced to the under at -120. Pena has won three of his last four fights and his lone loss was by split decision against Matt Frevola. Worthy is only fighting for the second time in UFC, but his upset win over Devonte Smith drew rave reviews. Pena is certainly more accomplished and should win, but +230 on a scrappy underdog like Worthy isn’t a bad gamble.

Gian Villante is jumping up a weight class here to fight Maurice Greene. Villante has generally fought as a light heavyweight, but he’ll fight as a heavyweight in this one. Villante got knocked out by Michal Oleksiejczuk on February 23 and will now give it a try in the heavyweight division. Villante joined the UFC in 2013 and is just 7-8 in 15 fights.

Maurice Greene has lost his last two fights to Aleksey Oleinik and Sergei Pavlovich. In theory, the 34-year-old Villante should be a little quicker than Greene’s more recent opponents, so we’ll see how he handles that. Greene also hasn’t shown enough knockout power in his MMA career. He only has two knockouts in his eight wins. He’s had a few submissions, but most of those came earlier in his career. Green’s best effort came against Junior Albini last June, but his last two losses don’t inspire a lot of confidence.

Undefeated Kyle Daukaus will make the leap from CFFC to the UFC for his official promotional debut against Brandon Allen. Daukaus was no stranger to Dana White, as he won by unanimous decision on the Contender Series over Michael Lombardo. Daukaus nearly got the submission there, but time ran out. Otherwise, Daukaus has eight submission wins in nine fights. His opponent, Brendan Allen, has eight submission wins in his career. He also has five knockouts, including one over Tom Breese in his most recent fight.

The former LFA champ is a very dangerous fighter. At 24, he already has 17 fights under his belt and has won 14 of them, including each of his last six. All three of his losses have come against fighters now in the UFC. His fist loss was to Trevin Giles. His next one was to Eryk Anders and his most recent loss was to Anthony Hernandez. He should win here and win by submission.

Another big favorite on the main card here with Mike Perry, who is over $3 against Mickey Gall. Perry has lost three of his last four fights, but he’s lost to Geoff Neal, Vicente Luque, and Donald Cerrone in that span. Gall got some notoriety for beating Sage Northcutt back in 2016, but has split his four fights since and hasn’t really been able to advance much in the division.

The big line here implies that Perry will do what he does best. Get into his opponent’s head and then throw until he can’t throw anymore. Gall was knocked out by Diego Sanchez two fights ago, so we know that he is capable of losing in that manner, give that he has never tapped out. The 1.5 is a fair line, but the -125 might not be high enough. While Perry is a finisher to a degree, three of his last five fights have gone the distance.

The end to a rather mediocre card could be a good fight between Dan Hooker and Dustin Poirier. Poirier is a big -220 favorite here, but the total of 4.5 suggests that we might get at least 12 minutes of action. This will be the first time we’ve seen Poirier since he lost to Khabib Nurmagomedov back at UFC 242. Nurmagomedov is a world-class grappler and wrestler and that proved to be too much Poirier, who suffered his sixth career loss and second submission loss.

Hooker has won four of his last five, including an impressive win over James Vick last year and a 15-minute win over Al Iaquinta. It was a split-decision win over Paul Felder last time out in what was the Fight of the Night. Many believed that Felder won that fight, but the judges went in a different direction with the New Zealand-born Hooker in Auckland.

Poirier should win the fight. This isn’t Khabib. This isn’t Conor McGregor, who has one of Poirier’s six losses. This isn’t prime Cub Swanson. Unless Poirier gets caught like he did against Michael Johnson back in 2016, he’ll win and get a really big fight next time out.