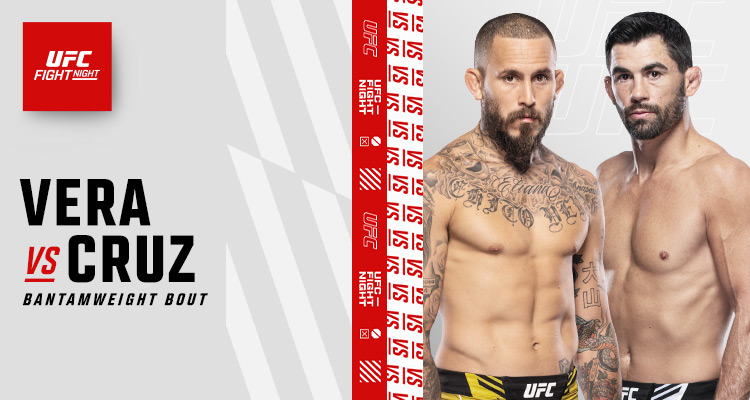 The UFC is back this weekend with a UFC Fight Night in Las Vegas. This time, it’s headlined by Marlon Vera and Dominick Cruz – a fight that should provide plenty of fireworks. Let’s take a closer look at that bout and two others as we make our picks for the card.

All odds provided by BetAnySports, sign up now and get a 55% new user welcome bonus!

The competition hits its peak when Marlon Vera takes on Dominick Cruz in the main event. Vera has had quite a strong run over the last couple of years and enters on a three-fight winning streak. He took down five straight fighters before a controversial defeat at the hands of Song Yadong back in 2020. That started a bumpy stretch where he dropped two of three – including being one of the rare fighters to beat Sean O’Malley. Adding it up, he’s now won nine of his last 11.

Meanwhile, Cruz started to fall out of contention for a bit after some uninspired efforts. The 37-year-old was 22-1 in his first 23 fights and was the Bantamweight champ, but then dropped two in a row to Cody Garbrandt and Henry Cejudo.

The question with Cruz is whether or not he’s in the twilight of his career. It feels like Vera should have the edge in youth, energy and momentum.

It took a while, but we will finally be seeing Nate Landwehr and David Onama compete. These two were going to fight in March but the fight got delayed after Landwehr pulled out.

Landwehr has fought in four fights so far in the UFC, alternating between wins and losses throughout that stretch. His last fight saw him take out Ludovit Klein by submission in the third round, so is he set to follow that up with a loss?

On the other side, Onama is coming off of a submission win himself against Garret Armfield in July. He’s been crowned as one of the best young fighters of his division after a handful of strong performances in a row. Watching him take on Landwehr here could be one of the most exciting fights of the night, especially given how each have proven to do well on the ground.

Two light heavyweights collide here with Devin Clark taking on Azamat Murzakanov. Clark previously lost two straight before finally getting back into the win column against William Knight with a third-round stoppage. Consistency has been an issue with him for quite some time but he displayed solid tendencies during his last fight. It’s going to be tough to replicate that against Murzakanov, though.

Murzakanov just recently graduated from Dana White’s Contender Series back in 2021 and has since proved he belongs. He beat Tafon Nchukwi in his debut fight a few months ago, stopping the fight early with a flying knee to end it. For his career, he’s now a perfect 11-0, winning eight of his bouts by TKO. Don’t be surprised if he gets to 12-0 here.