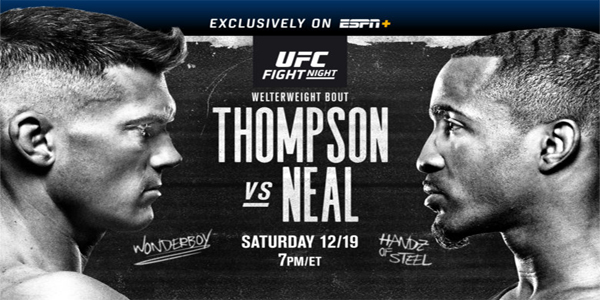 The final UFC event of 2020 is cause for celebration. What Dana White has achieved this year with the top mixed martial arts promotion on the planet has been nothing short of remarkable. White and UFC officials found a way to make it all work with no fans and with fight cards just about every weekend.

At some point, the financial ramifications of not having fans could come to a head, but that is likely why the UFC is making a lot of tough decisions at the end of the year to release aging fighters that are a financial drain relative to their returns in the Octagon. We’ve seen a lot of debut fighters and seen a lot of Dana White Contender Series contracts, so we have a new crop of combatants to follow in future years.

With that being said, quite a few veterans are on the main card for UFC on ESPN+ 41 at the UFC Apex. Also known as UFC Vegas 17 or UFC Fight Night 183, the main event will feature Stephen “Wonderboy” Thompson against Geoff Neal. The card also includes Jose Aldo, Marlon Vera, Marlon Moraes, Rob Font, and Anthony Pettis among other experienced fighters.

All of the action will be on ESPN+ and we’ll break down all 14 fights on this year-end card with odds from BetOnline Sportsbook.

Carlton Minus is actually a Plus here as the underdog for his lightweight fight against Rick Glenn. Glenn has not fought since November 30, 2018, so it has been a longtime since we’ve seen the once UFC regular in the cage. He fought three times in 2017 and twice in 2018 before this recent long layoff. Even with the long hiatus, Glenn is more than a $3 favorite against Minus, who lost his UFC debut on August 22 with a very uncompetitive showing against Matthew Semelsberger. Glenn should win, but who wants to lay that price?

The original date for Cody Durden vs. Jimmy Flick was a couple of weeks ago, but Durden had pink eye and couldn’t fight. The line is roughly about the same at this point. Durden fought to a draw in his UFC debut back on August 1 as a big underdog. Flick got a contract from a September DWCS performance. Flick’s ground game looks strong and Durden looked to be more of an upright fighter in the draw against Chris Gutierrez. Flick should get this one to the ground and get a tapout. You could take Flick by submission to cut down on the modest vig here.

Cameroon native Tafon Nchukwi knocked out Al Matvao back on September 8 and that was enough to get him a UFC contract to take on Jamie Pickett. These are two knockout artists, as Pickett has nine career KO/TKO finishes and all four of Nchukwi’s fights have ended in that manner. Pickett, a two-time fighter on the DWCS, has never been knocked out in 15 professional fights. We’ll see if that streak comes to an end here. Based on the side and total for this fight, that seems like the most likely outcome. Pickett is the biggest fighter with more reach. The underdog might not be a bad option here in a fight likely to end quickly and violently.

Remember Aiemann Zahabi? Frankly, you probably don’t. The 33-year-old Canadian debuted with a win over Reginaldo Vieira on February 19, 2017. It was Vieira’s last pro MMA fight. After that, Zahabi lost to Ricardo Ramos nine months later and then Vince Morales 18 months later. He’ll take on Drako Rodriguez here, one of many DWCS finds on the undercard. Rodriguez forced a submission of Mana Martinez back on September 8 to get his shot. The KOTC veteran lost to Tony Gravely in 2018 for his only career loss. Gravely is a veteran fighter and a full-time member of UFC now. That’s not bad. In other words, Rodriguez is probably underpriced here at -190 and this might be the best bet on the card.

When it comes to size mismatches, you won’t see many like this. Antonio Arroyo stands 6-foot-3 and Deron Winn is 5-foot-6. this will be a catchweight bout at 195 pounds with Arroyo a clear favorite. Winn beat 6-foot-1 Eric Spicely in his first UFC fight, but then lost to Darren Stewart and Gerald Meerschaert following a big step up in class. Arroyo is a step back down towards Winn’s level. This is only the second fight under contract for Arroyo, who was on DWCS twice and then lost to Andre Muniz back on November 16, 2019. Winn, while the shorter fighter that will have a tougher time getting inside, might be more of a live dog than people realize.

Karl Roberson and Dalcha Lungiambula were supposed to fight last week at UFC 256, but Roberson popped a positive COVID-19 test. The fight will now take place on this card. Roberson remains a big favorite, as bettors and oddsmakers seem unconcerned about any effects from the virus. One would think that it could hurt the cardio a bit, but this fight isn’t projected to go all that long anyway.

Could this be the last UFC fight for Sijara Eubanks? The 35-year-old is just 7-5 in her career with only two knockout wins. After starting out well in UFC, she’s lost three of her last five. Every UFC fight has gone to a decision. She’s just not an exciting fighter and the promotion is making lots of cuts. Pannie Kianzad has won two in a row since losing her first contract fight to Julia Avila. It would be wrong to say that this is a torch-passing fight, as Kianzad s a veteran of 19 fights to Eubanks’s 12, but she is the bigger fighter and the one trending up at 29. The underdog looks set up for success here.

This is a weird matchup for Anthony Pettis. After fighting the likes of Donald Cerrone, Nate Diaz, and Stephen Thompson over his last four fights, he now faces Alex Morono. Morono had a nice win over Rhys McKee back on November 14, but he did go 15 minutes and doesn’t really seem like the type of fighter that would get matched up with Pettis. On the other hand, the 33-year-old Pettis needs a win pretty badly. Beating Cerrone is almost ceremonial at this point. Pettis should get it, but I can’t help but wonder if his UFC days are numbered.

BET ON UFC AT BETONLINE SPORTSBOOK WITH A WELCOME BONUS

No total was posted at time of writing for this heavyweight fight between Marcin Tybura and Greg Hardy. Tybura is 3-0 in 2020 after a really tough 2019. He’s gone the full 15 in each of his last three fights and seems to have really matured as a fighter with a different approach to his fights. Tybura turned 35 back on November 9, but he’s found a second wind to his career and his veteran knowhow could be tough for Greg Hardy.

Hardy lost to Alexander Volkov last November. His wins have predominantly been against fighters with a similar experience level that he can bully and push around. Tybura isn’t that kind of guy. Stylistically, this looks like a bad matchup for Hardy against a patient fighter willing to bide his time. This looks a lot like the Volkov fight on the surface. The main difference is that Tybura isn’t 6-foot-7, but he also has a better submission game.

Gillian Robertson and Taila Santos have had to be flexible recently. Robertson was originally set to fight Andrea Lee last week, but that fight was canceled. Santos was fighting Montana De La Rosa two weeks ago, but a positive test from MDLR’s camp put that fight on hold. Now the two will fight each other.

Robertson beat Poliana Botelho back on October 17 for her fourth win in five fights. Since joining UFC, she’s really taken everything up a level and her only loss came against super-prospect Maycee Barber. Santos has also had quite a bit of success. Her only loss came a couple fights ago against Mara Romero Borella by controversial split decision. She beat Molly McCann back in July for her first fight in 17 months. To be honest, this fight is really close to call, but the -165 on over 2.5 seems light. Santos has never been finished and Robertson has gone deep into the third in her last two.

Rob Font hasn’t fought in over a year. The situation was similar last December, as Font went 358 days between fights. He beat Ricky Simon by unanimous decision. This will be his first fight since December 7, 2019 when he steps into the cage with Marlon Moraes. Moraes’s lone appearance in 2020 was a bad one, as Cory Sandhagen knocked him out on October 10.

The 32-year-old Moraes has struggled lately. He lost to flyweight turned bantamweight Henry Cejudo last June. Then he won a narrow split decision over Jose Aldo before the Sandhagen TKO. Font isn’t the most active of UFC fighters, but when he does get in the cage, he is a constant aggressor. In the smaller UFC Apex cage, Moraes may have issues with the length and the forward push of Font. This is a fight that looks ripe for an upset.

This is probably the most interesting line of the card. Khaos Williams has two very, very impressive knockouts in 2020 over Alex Morono and Abdul Razak Alhassan. The optics and the hype would suggest that Williams is the play at plus money. Pereira has also lost two of his last three fights. The 27-year-old is 2-2 in the UFC, but really hasn’t faced anybody with the power of Williams.

This will be a really exciting fight, however long it lasts. The line would imply that Pereira is the right side, but I have a hard time convincing myself of that. It is worth noting that Williams did take a big jump to the UFC and Pereira is a different kind of matchup for him. Maybe the easier thing to do here is expect a quick finish.

Jose Aldo needs a win to stop the bleeding. His most recent fight was a loss to Petr Yan for the vacant bantamweight title. That marked three losses in a row for Aldo, who was on at the top of the UFC mountain. He’ll take on Marlon Vera in this fight, a fight that was set up a little over a month ago.

Vera beat Sean O’Malley last time out, but O’Malley suffered an injury early in the fight was badly hampered by it. While that win buys some recognition, Vera really needs this win over Aldo, a fighter who seems to be on a downward trajectory. The price seems a little bit optimistic here on Aldo to return to form. It’s entirely possible that the abuse of his last three losses has simply taken a toll.

This is a huge opportunity for Geoff Neal. The 30-year-old has seven wins in a row after his XKO loss to Kevin Holland and we’ve all seen where Holland’s career has gone since. Neal hasn’t fought since he knocked out Mike Perry back on December 14 because of some health scares. In fact, things got so tight financially for Neal that he had to go back to his waiter gig to make some money. You won’t find a fighter more motivated for an opportunity like this one.

Wonderboy Thompson should be plenty motivated, too. This is his first fight since November 2 of last year when he beat Vicente Luque to stop a two-fight losing streak. Thompson, now 37, is not the fighter or striker that he used to be. It’s a big reason why Neal is the favorite here in this fight and why he should be victorious in this bout.

GET A 100% DEPOSIT MATCH BONUS FROM BETONLINE SPORTSBOOK FOR UFC FIGHT NIGHT: THOMPSON VS. NEAL