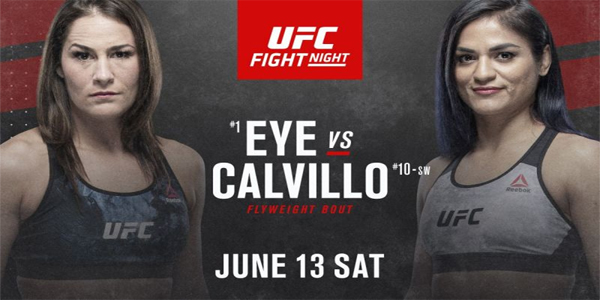 More UFC comes your way this week from the UFC APEX in Las Vegas with the UFC Fight Night 172 card and a main event between Jessica Eye and Cynthia Calvillo. There are 11 fights on the card and quite a few names that fight fans will know on the ESPN broadcast.

No disrespect to this week’s UFC card, but the biggest news of the week has not been about this event. Two big bombshells from Dana White took center stage in the news cycle with the announcement that Fight Island is a thing that will happen in Abu Dhabi, including an enormous UFC 251 card with three title fights. The second is that Stipe Miocic and Daniel Cormier will fight on August 15 in the final matchup of the trilogy at UFC 252.

We’ll have a lot to look forward to with UFC over the summer. For now, we look forward to this UFC on ESPN+ 30 event. The betting odds are from 5Dimes Sportsbook, but make sure that you shop around for the best prices on the fighters, the totals, and, of course, the props.

The card starts with a couple of newcomers. Christian Aguilera, not to be confused with the Genie in a Bottle, makes his UFC debut after going 13-6 with 10 knockouts in a few different promotions, including LFA and BAMMA. The 5-foot-9 scrapper is giving up a lot of size to challenge Anthony Ivy, who stands 6-foot-2. Ivy is 8-2 for his career with eight stoppage wins. He has tapped out twice, but Aguilera has never recorded a win by sub. It appears as though these two will stand and throw, so the Under 1.5 at +105 seems like a better option than guessing with the +158 on Aguilera or the -190 on Ivy.

Another size mismatch highlights the second fight of the evening with -165 favorite Jordan Griffin up against +145 challenger Darrick Minner. This one is heavily juiced under 2.5 at -220. Griffin is 1-2 in his UFC career, but he lost to Dan Ige and Chas Skelly before beating TJ Brown, who is more on his level. Minner lost back in February to Grant Dawson in his debut fight and it wasn’t pretty. He also lost to Herbert Burns on the Dana White Contender Series. These two guys both have effective takedown games, but Griffin is the bigger fighter, which should give him the advantage.

Tyson Nam is +100 and Ryan Benoit is -120 in flyweight action at 125 pounds. The judges are expected to be called upon here with a total juiced at -245 on the over 2.5. Three of the last four for Benoit have gone the distance and come down to split decisions. Nam is 0-2 in his UFC career, but he fought Sergio Pettis and Kai Kara-France. He gets a bit of a respite here, as Benoit is a decent fighter, but not on the level of those other two guys. The short underdog could be a good bet here at even money.

The first of three women’s fights on the card features heavy favorite Julia Avila at -485 against Gina Mazany in the bantamweight division. Mazany is a +385 pup in her UFC return. She beat Valerie Barney in KOTC without issue last time out, but went just 1-3 in her UFC stint. In fairness, she lost to some pretty good fighters in Sara McMann, Lina Lansberg, and Macy Chiasson. The 32-year-old Avila won her UFC debut back in July, after going 6-1 in previous circuits, including her lone career loss in Invicta. Avila should win, but -485 is a little cost-prohibitive here. A better option is to hone in on the total, which is 2.5 and -115 both ways. Mazany has a decent takedown game, whereas Avila is more of a striker. Will that be enough to extend the fight? I think it should, so over 2.5 is the play here.

Charles Rosa is +150 with -170 on Kevin Aguilar as the men return to the Octagon for this featherweight fracas. This will be a good test for Aguilar. He’s lost two in a row and Rosa is a very well-rounded fighter that can stand upright or fight on the canvas. He also lost his most recent fight to Bryce Mitchell. Aguilar is more of a striker, but has been a decision artist in UFC with four of his last five going the full 15. Not surprisingly, the over 2.5 is juiced at -225 for this fight. Aguilar, a former LFA champion, is showing some cracks in the armor in the UFC and that’s why Rosa at +150 isn’t a bad gamble.

Hannah Cifers is back on short notice for a fight against Mariya Agapova. Cifers is a big underdog at +195 against Agapova, who fights out of Kazakhstan. This is the official debut for Agapova, who suffered her only career loss on the Dana White Contender Series back in July. She has seven inches of height on Cifers here, which is a contributing factor in the -235 price. Cifers also just lost to Mackenzie Dern by first-round submission. She was a massive underdog in that fight and she’ll likely lose again here.

Mark De La Rosa brings a three-fight losing streak into this match against Jordan Espinosa. Espinosa has lost two straight himself, both by first-round submission, so these are two guys with a heightened sense of urgency to say the least. De La Rosa’s most recent loss to Raulian Paiva was a bit of a stunner in that it was his first career KO loss. Three of his four career losses have come in the last 15 months, so he really needs something positive to happen in this fight. Paiva was a -210 favorite in that fight.

Espinosa scored a last-second knockout in his Dana White Contender Series fight against Rilley Dutro and got himself a contract, but he went 1-2 in his fights. He beat Eric Shelton for his first official UFC win, but then lost to Matt Schnell and Alex Perez before the first round bell. He does appear susceptible to losing by submission and De La Rosa has six such wins in his career. Some recency bias may be playing into this line a little bit and De La Rosa looks like a juicy underdog at the price.

Former main event competitor in TKO Charles Jourdain takes his talents to the main card of a UFC event for the second time as he squares off with Andre Fili. Jourdain was on the main card back in December and confirmed the matchmaker’s suspicions with a knockout win over Dooho Choi. It was the perfect bounce back performance for Jourdain after a decision loss to Desmond Green in his UFC debut. Now he draws an accomplished vet in Andre Fili.

The 24-year-old Jourdain does have a ceiling in this business and it would appear to be a high one. All 10 of his wins have come via stoppage. Fili has gone the distance in four of his last five and has gone 3-2 in that span. He should have the higher fight IQ here and will want to draw this thing out and stay away from Jourdain’s striking ability. Fili also presents an issue for Jourdain in terms of the Canadian’s takedown defense. We’ll see a lot of questions about Jourdain answered here. The total implies that Fili will control the pace and distance of the fight. If that’s the case, he will win. If that isn’t the case, Jourdain can pull the upset.

Ray Borg is making a quick turnaround here. The 26-year-old submission artist just fought on May 13 in a split-decision loss to Ricky Simon. That snapped a little bit of momentum coming off of wins against Gabriel Silva and Rogerio Bontorin. Borg’s two previous UFC losses were more than understandable against Demetrious Johnson and Casey Kenney. The most recent loss to Simon came as a +145 underdog and Borg was facing a bit of a size disadvantage. He has to deal with the same thing here.

Merab Dvalishvili beat Casey Kenney last time out back in February to end a long layoff. He, too, has a loss to Ricky Simon on his record, but it came back on April 21, 2018. This line does look a little bit high, but everything Borg does well, Dvalishvili does better. He also has a couple inches and a good bit of reach on his opponent. There just aren’t a lot of ways to bet this fight with a high line and a heavily-juiced total.

This fight is finally going to happen. It was supposed to happen back on May 13, but Karl Roberson pulled out of the fight because he couldn’t complete the weight cut. We’ll see if he makes it here or if he’ll have to forfeit part of the purse. Marvin Vettori was a -160 favorite when we wrote about that fight, but you can see the price adjustment based on what happened with Roberson.

Roberson has been fine in the UFC, but many would say that he lost to his two best opponents in Glover Teixeira and Cezar Ferreira. Vettori is a very good fighter. He lost by split decision to Israel Adesanya, which is one of those rare cases in which a loss just might be a win. Adesanya has been on a rocket up the UFC rankings since and Vettori is still waiting for his shot. He’ll win this fight and keep advancing forward.

This is a big opportunity for both fighters. Cynthia Calvillo had a modest two-fight winning streak snapped by fighting to a draw with Marina Rodriguez back in December, but Calvillo had her on the ropes a couple of times in that fight. Jessica Eye wants another crack at champion Valentina Shevchenko after suffering a vicious knockout loss against the champion just over a year ago. It took her a while to get back to UFC, but she did with a December win over Viviane Araujo.

Calvillo has a really nice 8-1 record, but she doesn’t possess a ton of striking power. She’s also had past problems with weight cuts, not just with making them, but staying healthy in the process. It was an issue against Rodriguez and could end up being an issue here against Eye as well.

Aside from getting her brain scrambled by a knockout blow from Shevchenko, Eye has four wins in her last five fights. They’ve all been by decision. She is not a big striker or knockout artist either. If the weight cut bothers Calvillo again, getting into the championship rounds is going to take a toll on her body. Eye is in supreme physical shape and has never had a problem going the distance. As a result, she gets the nod here.