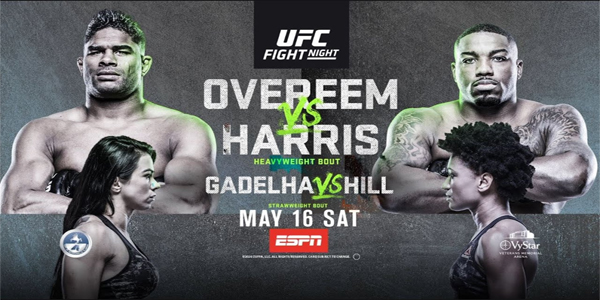 Another UFC event is in the books as the top mixed martial arts promotion in the world surges forward with events at the empty VyStar Veterans Memorial Arena in Jacksonville, Florida. Saturday May 16 brings our third UFC event of the week, headlined by a main event featuring Alistair Overeem and Walt Harris. UFC Fight Night 172 is the weakest of the three cards that we have had, but any event is a good event these days.

We’ll break down the 11 fights on the card with odds from 5Dimes Sportsbook and we’ll keep bringing you these fight previews as long as we have them.

Action starts at 6 p.m. ET with -120 favorite Don’Tale Mayes against UFC debutant Rodrigo Nascimento. Nascimento is +100 after impressing on the Dana White Contender Series last July with a first-round submission victory against Michal Martinek. Nascimento is a perfect 7-0 with seven stoppage wins in his MMA career, which started back in 2012. Mayes got two tries on the Dana White Contender Series before getting a full contract. He lost his debut fight to Ciryl Gane, but he went nearly 15 minutes with the monstrous heavyweight before tapping out. He took some punishment in that fight, but kept on ticking. These are two decent heavyweight prospects in their late-20s, so this may be a springboard fight for both guys. It is a hard fight to gauge, but Gane is better than anybody Nascimento has fought and Mayes showed well there.

Cortney Casey is a -165 favorite against Mara Romero Borella in the women’s flyweight division. This one is heavily juiced on the over 2.5 at -445, so it would seem that Casey by decision is the most likely outcome. Casey has lost three of her last four fights. So has Borella, who last back on February 15 to Montana De La Rosa by decision. This is the first fight in 15 months for Casey, so I’m not sure I could lay the big number, but Borella hasn’t shown much upset potential.

Darren Elkins is -125 in what projects to be a competitive fight against Nate Landwehr. Landwehr is +105 in search of his first UFC win. He lost to Herbert Burns by first-round knockout in his UFC debut being the M-1 champion with two title defenses in the featherweight division. Elkins is hoping to celebrate his 36th birthday with a win. He hasn’t had one of those since January 14, 2018, with losses to Ryan Hall, Ricardo Lamas, and Alexander Volkanovski. He really seems to be on the downside of his career and Landwehr has a good chance at the mild upset here.

A couple more featherweights square off here in a battle between heavily-favored Mike Davis and Giga Chikadze. Davis is the -210 favorite with the over juiced at -175 on 2.5 rounds. David, who lost to Sadiq Yusuff on the Dana White Contender Series, stopped in Island Fights for a couple matches before getting a UFC contract starting with a fight against Gilbert Burns. He lost that one, but bounced back for his first career win with just 15 seconds left against Thomas Gifford. Chikadze was victorious over Jamall Emmers back at UFC 248 right before everything shut down. He’s won both of his UFC fights after a DWTNCS loss in 2018. Davis has a higher ceiling as a prospect, but this line is getting a little high given the bodies of work for both guys.

Former LFA champion Anthony Hernandez will get in the Octagon for his fourth career UFC fight in this scrap against Kevin Holland. Holland is the very mild favorite at -115 in another fight expected to require judges’ input. Interestingly enough, Holland’s most recent fight was a loss to Branden Allen. Allen is the man that Hernandez beat to win his LFA title in the middleweight division. That loss for Holland snapped a three-fight winning streak. Hernandez responded to his first career loss with an impressive win over Jun Yong Park. Holland is the more accomplished UFC fighter, so he gets the nod at -115 here in what should be one of the better fights of the card.

Miguel Baeza puts his undefeated 8-0 record on the line in this fight against UFC veteran Matt Brown. The welterweight matchup has Baeza as a -210 favorite and this is first non-heavyweight fight of the night expected to end prior to the final bell. This looks like a fight for Baeza to score a win over a name opponent with a wide audience looking on. Baeza knocked out Hector Aldana in his UFC debut and now draws a veteran of 40 fights that has only fought once in the last 2.5 years. Brown did beat Ben Saunders back in December to turn the clock back, but Baeza is the pick here.

The main card starts with a bang, as Marlon Vera puts his five-fight winning streak on the line against Song Yadong. Vera has won all five via stoppage, with three knockouts and two submissions. It has been an extremely impressive transformation for Vera, who lost back-to-back decisions to John Lineker and Douglas Silva de Andrade before this recent run. He isn’t getting much respect here in this line, but that could be to our benefit.

Song Yadong is 4-0-1 in his UFC career. He fought to a majority draw on December 7 against Cody Stamann. Stamann won the third round and was able to gain some favor with the judges as a result. Song has to avoid the ground game here of Vera. Stamann took the fight to the ground and managed to gain enough control to close the gap after a bad first round. We’ll have to wait and see how Song has adjusted, but I wouldn’t lay a big price like this after that last showing.

It might be a little bit unfair to say that Eryk Anders has been a disappointment in the UFC, but he certainly was billed as much more than he became. Anders may be blooming late in his career after a split decision win against Gerald Meerschaert, but he just hasn’t consistently been good enough. We see that in this price against Krzysztof Jotko. Anders did finish 2019 on a high note, but lost three straight and four of five prior to that.

Of course, we can say the same about Krzysztof Jotko’s recent results as well. He beat Marc-Andre Barriault and Alen Amedovski to finish 2019 on a high note after a terrible run in 2017 and 2018. Neither one of these guys has consistently shown the ability to inflict enough damage to get a stoppage. Quite frankly, this fight could go either way once it gets in the hands of the judges. Statistically, these two guys are quite similar in terms of significant strikes and takedowns. The best play here is to lay the over 2.5 juice.

Very quietly, Dan Ige has had a fine UFC career. He lost his debut fight to Julio Arce, but he’s won five straight since then. His win at UFC 247 over Mirsad Bektic was a war that ended in a split-decision win for Ige, but he got the job done. He’s coming back to take on Edson Barboza in this scrap. The 28-year-old Ige is stepping up in class here. Barboza has lost four of his last five fights, but those losses have been Paul Felder, Justin Gaethje, Kevin Lee, and Khabib Nurmagomedov.

This feels like a fight that UFC likes to mix in every now and then. They like fights to put guys over and they like fights to put guys back on the map. Barboza badly needs a win. Ige has an impressive run going, but you can certainly poke holes in the quality of competition. As a result, we see Barboza a -130 favorite here with that in mind. He’s fought many of the division’s best. Ige isn’t on that level.

The price says it all here. Angela Hill is having a nice run. She has three straight wins and two of them came earlier in 2020 before everything shut down. She knocked out Hannah Cifers and beat Loma Lookboonmee. She takes on a strong customer here in Claudia Gadelha. The 31-year-old Gadelha has actually been something of a disappointment to this point in UFC. Since her title opportunity against Joanna Jedrzejczyk, she’s just 4-2 and only fought once last year.

Hill is a hard worker. She fights a lot. Gadelha hasn’t had that chance recently because of a major ankle injury and then a canceled fight because Alexa Grasso missed weight. The fact is that we haven’t seen Gadelha post-injury, which she suffered last October. I’m not sure what we get here. We know what Hill is and she probably isn’t good enough to beat Gadelha if the favorite is operating anywhere close to normal.

It will be an emotional return to the Octagon for Walt Harris. The -145 favorite in this fight tragically lost his stepdaughter Aniah last fall, just days before a scheduled match against Alistair Overeem was supposed to take place. Harris had already withdrawn from the fight, but he got the news that he nobody wanted to hear. This is his return to the main stage of UFC and it is sure to be a difficult day for him.

Similarly, it has to be tough for Overeem. The 39-year-old wants to win and needs a win after losing to Jair Rozenstruik, but these two guys have been around a while and it would be tough for Overeem to be too excited about beating up an opponent like Harris. We’ll have to see how both fighters handle this one. I’m not really sure where to begin with a fight like this. It will be a trying experience for both fighters.