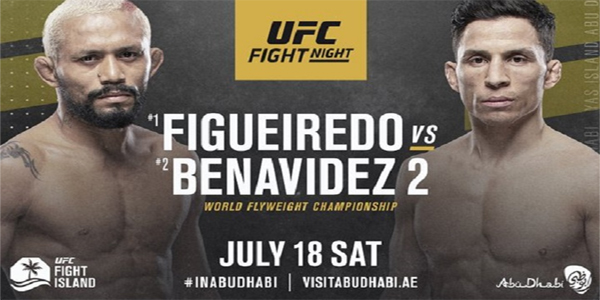 The fight cards just keep on coming for the UFC. We’re back at Fight Island for the third time in a week, this time for a card highlighted by a main event rematch between Joseph Benavidez and Deiveson Figueiredo. The card also features Jack Hermansson vs. Kelvin Gastelum in a middleweight fight that is main event level as well.

Let’s not waste any time digging into the fight odds at BetOnline Sportsbook for the Saturday July 18 card. Once again, with no fans in attendance, this one will start bright and early in Dubai so that it can be shown in primetime for the United States crowd.

We start with Sergey Spivac as a -175 favorite in his fight against Carlos Felipe. This will be the UFC debut for Felipe, who comes in at 8-0 for his career, but has not fought since May 20, 2017. Spivac (or Spivak) is 1-2 in his UFC career, with an impressive win over Tui Tuivasa, but losses to Walt Harris and Marcin Tybura. Basically, he was caught by Harris with the step up in class and the veteran Tybura put on a clinic. Felipe is only 25 and this is the right type of fight for Spivac to win. He’s a good open parlay piece to start the card.

Davi Ramos is +175 in the lightweight division against Arman Tsarukyan. The favored Tsarukyan is 1-1 in his UFC career to this point, with a loss in his debut to Islam Makhachev and a win over Olivier Aubin-Mercier. Ramos has been a UFC fixture for a while and it is interesting to see Tsarukyan such a big favorite here, given that Ramos, who also has a loss to Makhachev, had won four straight fights after his debut loss to Sergio Moraes. Ramos looks like a live dog in a fight that appears likely to go to the cards with the over 2.5 at -240.

The first of three flyweight fights will feature a couple UFC debutants in Malcolm Gordon and Amir Albazi. Albazi is the -160 favorite against Gordon. This fight was a late addition to the card, so it remains a circled fight at time of writing with lower limits than a regular UFC fight at this point. Gordon is 12-3 in his career with 10 finishes, which is a lot for a flyweight. Albazi has 11 finished with his 12-1 record. This is a big opportunity for both fighters. Albazi does have Bellator fights on his resume, which is part of the reason why he is the clear favorite in this fight, but we have a lot to learn about these two.

We should get a good bantamweight fight here between Brett Johns and Montel Jackson. Jackson is a clear -205 favorite with another one expected to go to the judges with the over 2.5 at -260. Johns has been a decision machine in his career. Eight of his 16 wins are finishes, including his most recent effort against Tony Gravely, but he is 8-2 in decisions for his career. Jackson has won back-to-back unanimous decisions to improve to 9-1. He’s got the size edge here, but it’s also worth noting that the two losses for Johns are excellent fighters in Aljamain Sterling and Pedro Munhoz. Jackson might win, but this price is too big. The underdog is worthy of a look.

The biggest favorite role on the card belongs to Joe Duffy at -340. Joel Alvarez is +280. Duffy has only fought once since November 4, 2017 and that was a loss 16 months ago to Marc Diakiese by decision. Duffy should win this fight given the odds and where he was in his career before the long layoff, but the 6-foot-3 Alvarez has a huge edge in the size department. He, too, is on an extended layoff, with his most recent fight back on June 1, 2019, but it was a win over Danilo Belluardo. Both guys have racked up submission wins in their careers, so this one will be about top control. Alvarez is in just his third UFC fight, but, again, this line looks too high with a vulnerable favorite.

Nad Narimani and Grant Dawson will fight at a catchweight limit of 150 pounds. Dawson has been impressive with a 3-0 official record in UFC, including two submission wins. He got his shot on the first season of the Dana White Contender Series and has not looked back. He is a hefty -230 favorite here against Narimani, who was the champ in CWFC before making the leap to UFC. He is 2-1 in his three fights, but Dawson will be the best opponent he has faced to date. This is a fight where the favorite looks like the side, making this another open parlay piece to put with Spivac.

Khadis Ibragimov is 0-2 in the UFC after being the light heavyweight champ in M-1. Da Un Jung and Ed Herman have the two wins over him. He should be set up for his first win here against Roman Dolidze, who comes over from the WWFC. His most recent fight was December 15, 2018. Or is he? Dolidze is a -160 favorite for his UFC debut. This line seems to be loaded with recency bias, as Ibragimov hasn’t looked good, but he’s fought two veteran fighters. Dolidze is more on his level. This feels like a lot more of a toss-up than the line would suggest. After all, Ibragimov was also undefeated before starting in the UFC.

Flyweights Askar Askarov and Alexandre Pantoja get together for the first fight on the main card. We’ve got a heavily-juiced total to the over here, as both of Askarov’s UFC fights have gone the distance, but Pantoja has been a good finisher throughout is career and each of his last three UFC wins have come via first-round stoppage.

Askarov is 11-0 in his career and has 10 finishes in that span, so why are we looking at +190 on the 2.5 here? This fight should be full of fireworks. If Pantoja is going to win, wouldn’t a stoppage victory be the preferred method, given that he is only 6-4 in decisions in his career? Neither guy has been stopped in a losing effort, but these are two strong strikers in the division with better size than most flyweights.

Luana Carolina lost her first professional MMA fight by a split decision. She is a perfect 6-0 since then, with three wins by stoppage and three wins by decision. She’ll take that six-fight win streak into this matchup against Ariane Lipski. Carolina was victorious last time out for her first UFC win against Priscila Cachoeira. She almost scored a stoppage win after a big left kick to the head of Cachoeira. She dominated the fight.

But this is a major step up in class against Lipski, a veteran of 17 career fights. It took her some time to get to the UFC, where she is 1-2 in three fights, but she’s a deserving favorite here. Lipski got off to a bad start in her UFC debut against Joanne Calderwood. Molly McCann is a solid, experienced fighter. She looked better against Isabela de Padua, but that isn’t a household name. This is a big fight for Lipski, who needs to win matches like this.

Marc Diakiese was originally set to face Alan Patrick here, but Patrick withdrew from the fight on July 14. Rafael Fiziev will slot in on short notice. We often think of the hardships put on a fighter jumping in, but what about the planning that Diakiese did for Patrick? Now he’ll have to fight a big striker in Fiziev, who has five career knockouts.

Fiziev is just 1-1 in his UFC career and Diakiese, once believed to be a can’t-miss prospect in the division, may finally be tapping into his potential with back-to-back wins. Diakiese came in undefeated and lost three straight fights in just over a year from the summer of 2017 to the summer of 2018. He is now 5-3 in the UFC and may be working his way back up the ranks a little bit. It may be a good time to buy on him when the price is still fairly low.

Let’s be honest, this is probably more of a main event than the actual main event. This is an outstanding middleweight fight between Kelvin Gastelum and Jack Hermansson and this is a really important scrap for both fighters. Gastelum lost to Israel Adesanya on April 13, 2019 to lose the title, but it was the follow-up loss to Darren Till that hurt more. Adesanya is a world-class fighter and there is no shame in losing to him. Gastelum’s issues with weight have held him back a little bit and he was fortunate to make weight for the split-decision loss to Till.

Jack Hermansson is coming back off of a rare loss to Jared Cannonier to snap a four-fight winning streak. Hermansson has the clear size edge in this fight against Gastelum. By no means is Hermansson on Adesanya’s level, but that was a fight where the size edge had a clear-cut impact. It makes sense that Hermansson has been bet into the small favorite here.

Keep in mind that Gastelum, who was regularly appearing in main events, is just 5-5-1 in his last 11 UFC fights. He’s living on a reputation that he hasn’t really been able to uphold.

Joseph Benavidez and Deiveson Figueiredo will be in action for the vacant flyweight championship in this one. Figueiredo knocked out Benavidez back in February to take the title when the two met in the main event in Norfolk. Figueiredo’s ability to fight here was put into question when he tested positive for COVID-19 on July 11, but a follow-up test was a negative.

Figueiredo missed weight in the first title fight, so the title was vacated. We’ll see if he makes the cut here or not. The first fight was pretty even for the most part. Figueiredo scored the knockout win, but Benavidez was the far more active striker in the match. It marked just the second time that the 35-year-old Benavidez went down by knockout.

While the first outcome is what is fresh in everybody’s mind, Benavidez was the better striker in that fight. An upset wouldn’t be the biggest stunner here.