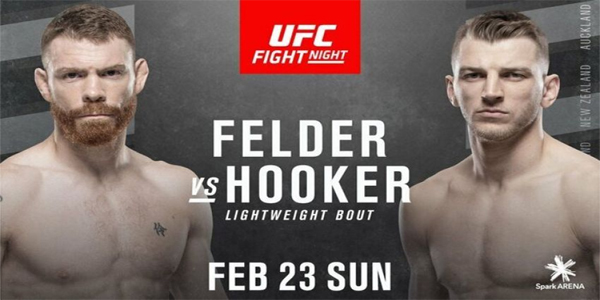 We have reached that point in the year when it feels like there are no weeks off for the UFC. Another event comes your way this weekend down in Auckland, New Zealand. This is the third time that the UFC has gone to New Zealand and the first time since June 2017.

Let’s break down this fight card with odds from 5Dimes Sportsbook. Whether you call it UFC Fight Night 168 or UFC on ESPN+ 26, we have 13 fights to consider for the card. This one starts at 4 p.m. ET on Saturday February 22. It will be Sunday in New Zealand, hence the date on the featured image.

There have been a few fighter changes on this card and one of them was in the first fight. Rachael Ostovich has been replaced by Priscilla Cachoeira for the women’s flyweight opener against Shana Dobson. Dobson is a -200 favorite over the replacement. This is a very important fight for Dobson, who has lost consecutive fights to fall to 3-3 in her pro career. Cachoeira has lost three straight, but did lost the first of those to Valentina Shevchenko. Dobson should hold serve as the chalk here, but neither fighter seems to be worth your money.

Takashi Sato is a -120 favorite over Maki Pitolo in the welterweight division in the second fight of the night. Pitolo lost his official UFC debut to Callan Potter back in October. After an impressive first-round KO victory against Justin Sumter on the Dana White Contender Series in July, Pitolo got his shot. It was an active and exciting fight, but he came up on the short end. Sato is 1-1 in UFC with a win over Ben Saunders and a loss to Belal Muhammad by submission. This will be an active fight both ways. Sato has a lot more experience at the upper levels, but this one will be about who gets the bigger shots in. Sato has shown the stoppage power against better fighters, so the lean is with him at -120.

Another fight with a fighter change in the women’s division is this strawweight bout between Loma Lookboonmee and Angela Hill. Initially, Hannah Goldy was set to fight, but Hill now slots in as the replacement. She also slots in as a -200 favorite. Hill just fought back on January 25 and knocked out Hannah Cifers with the help of some vicious elbows. She must be feeling good to come right back. It is a rapid turnaround to say the least, but Hill has really shown some good violence in her last two fights. Lookboonmee won’t be ready for it in her second career UFC fight.

Tyson Nam is one of the bigger underdogs on the card at +220 against Kai Kara-France in the men’s flyweight division. Kara-France is -260 coming off of a decision loss back in December to Brandon Moreno in what was a very exciting fight. That was the first loss for Kara-France in three years and he was a -165 favorite in that one. The -255 price looks cheap in a bounce back spot against Nam, who is only in his second career UFC fight.

Callan Potter will have some fan support here as an Australian-born fighter, but he faces long odds against Kenan Song. Potter is 1-1 in UFC so far with a violent knockout loss to Jalin Turner and a decision win over Mark Pitolo, who appears earlier on the card. Song is 3-1 in his four UFC fights. Like the previous fight, this -200 number looks a little bit cheap. You hate to go so chalk-heavy, but a Hill/Kara-France/Song parlay looks pretty nice to cut into the juice of three -200 or higher favorites. Those three fighters are just more advanced and more accomplished.

Jake Matthews is -225 against Emil Meek at 170 pounds. Matthews, also an Australian fighter, will get a little more crowd support than Meek of Norway. This will be Meek’s first fight since July 22, 2018, so cage rust could be a real factor and it could also be priced into the number a little bit here. Matthews is also more of a household name, though he just came off the shelf from a 10-month layoff to beat Rostem Akman. I don’t think Matthews is quite a -225 favorite here, but I also can’t make much of a case for Meek coming off of the layoff.

Jalin Turner is yet another chalky price at -210 for his fight against UFC newcomer Josh Culibao. Culibao was a late injury replacement for Jamie Mullarkey. He is 8-0-0 in his pro career, but I think this is a tough spot for him. He hasn’t fought anybody that matches up athletically with the 6-foot-3 Turner, so he’s giving up speed, size, and Turner has already shown a lot of knockout power. Turner doesn’t have the most impressive record at 8-5 because he is still a little bit immature as a fighter with a kill or be killed mindset. I would expect him to be the killer here, but he does have a penchant for getting caught and Culibao does have five career knockouts. My thought here is that the under round prop is a better look when those come out.

A coin flip with juice begins the main card portion of the show with Kevin Aguilar and Zubaira Tukhugov. Aguilar’s last four fights have all gone to decision and those have been all the fights under the UFC umbrella. The 31-year-old Aguilar just suffered his first loss in 5.5 years against Dan Ige. Ige got top control and stayed just aggressive enough to win the fight by decision. Aguilar is looking for a bounce back here in his fifth UFC fight.

Zubaira Tukhugov is a really hard guy to handicap here. His last fight against Lerone Murphy ended in a draw. It was his first fight in over three years. The last time we had seen him was UFC 198 when he lost to Renato Moicano by split decision. It isn’t that Tukhugov is old. In fact, he is only 29 and still has 23 fights under his belt with a three-year hiatus. It is just that we don’t know what we’re going to get. On the other side, I have a pretty good idea of what I will get from Aguilar. He’ll do just enough to win by decision.

This is a big moment for New Zealand native Brad Riddell. The 28-year-old won his UFC debut at UFC 243 over Jamie Mullarkey by unanimous decision. He didn’t fight in a lot of great promotions, but made his way to UFC and was impressive enough to get another crack and to get it here at home. He is a kickboxer by trade and more of a striker and knockout type of guy. That is a big contrast to Mustafaev, who is viewed as more of a grappler and wrestler.

Mustafaev, like Tukhugov in the first fight, took a 2.5-year absence between fights. After losing to Kevin Lee for just the second career loss of his career, he came back to knockout Rafael Fiziev in a manner that earned him the performance of the night bonus. We have two pretty contrasting styles here, though Mustafaev did show knockout prowess in that Fiziev fight. To me, this looks like one of the hardest handicaps on the slate, but Mustafaev is more experienced against competition of this quality.

Ben Sosoli’s UFC career has been interesting. It started on the Dana White Contender Series with a No Contest declared after two minutes and eight seconds. His second fight against Greg Hardy was overturned because he used an inhaler between rounds. In essence, Sosoli is 0-0 in two career UFC fights. He gets another one here against Marcos Rogerio De Lima.

Karolina Kowalkiewicz has dropped each of her last three fights and it seems like the 34-year-old may be on her last legs as a fighter. She lost to Jessica Andrade by knockout back at UFC 228 and almost tapped out at the hands of Michelle Waterson in her next fight. Kowalkiewicz and Alexa Grasso exchanged flurries in her most recent fight, also a loss. This just looks like another bad matchup for her.

Xiaonan Yan has won four straight fights, all by decision. The question in this fight is whether or not Yan can keep up with Kowalkiewicz’s activity enough to get the decision victory. There is a chance that she cannot, but she is so good at controlling fights and has scored wins over other active fighters, most notably Angela Hill in her last scrap. That same gameplan should give her a win here. That being said, this juice is pretty high, so this one isn’t high on my list of picks.

Let’s see if Jimmy Crute can bounce back from his first career loss. In order to do so, he’ll need to pull a mild upset as a +115 underdog against Michal Oleksiejczuk at 205 pounds. Crute lost his most recent fight to Misha Cirkunov, who got the fight to the ground and took advantage with the submission win. Up until that point, Crute was 10-0, including seven stoppage wins. Crute had beaten Paul Craig and Sam Alvey, both in Australia, before the loss to Cirkunov in Vancouver, British Columbia.

He’ll be back fighting in a region that he knows well against Oleksiejczuk. The favorite is also coming off of a loss to Ovince Saint Preux back in September. Oleksiejczuk was part of a no contest against Khalil Rountree at the end of 2017 and looked to be on the rise in 2019 with first-round wins over Gian Villante and G. Antigulov before the loss to Saint Preux by submission.

These two fighters are both rising in the division and both just happened to get caught on the ground. This fight will be upright more often and that means that any flurry of strikes could end it. In fights like that, I generally side with the underdog.

We finish up with the lightweight main event that could need championship rounds between Paul Felder and Dan Hooker. Felder went 2-0 in 2019 with wins over James Vick and Edson Barboza that went the full 15 minutes. This looks like one that will require the championship rounds if Felder has his way.

If he doesn’t, that would suit Dan Hooker just fine. Hooker has 17 stoppage wins out of 20 career victories and knocked out Vick last year. He also bested Al Iaquinta via decision at UFC 243 with a perfect score of 30. Hooker owned the fight. He didn’t get to finish Iaquinta, but it was another extremely impressive effort from him. He was the more active fighter and the more accurate fighter.

It is hard to get Felder down, but Hooker is a high-volume striker and a significant one at that. Felder is more about controlling fights. I don’t think this is a good matchup for him at all.

The Importance of Closing Line Value