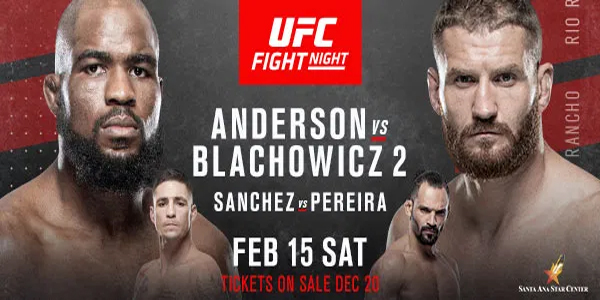 UFC on ESPN+ 25 cannot get here soon enough for Dana White and the other executives. All of the talk this week has been about how Dominick Reyes got “robbed” in his fight against Jon “Bones” Jones. It was almost one of those “ties go to the runner” situations in baseball. Reyes had to beat Jones by a clear and decisive margin. He may have won the fight, but he didn’t win in a convincing manner and Jones got the win.

Nobody is talking about UFC Fight Night 167, which features a main event rematch between Jan Blachowicz and Corey Anderson. It’s almost like there isn’t even a fight card this week. Hopefully this one is good enough to distract perturbed fans from what happened at UFC 247.

We’ll take a look at this card, with info and the betting odds for all 13 fights. The odds will be from 5Dimes Sportsbook. The analysis will be from me. Here we go.

Action begins in Rio Rancho, New Mexico with the flyweight fight between Mark De La Rosa and Raulian Paiva. Paiva is the -210 favorite with +175 on the take back on the underdog. De La Rosa went 0-for in 2019 with losses to Alex Perez and Kai Kara-France. Paiva is also 0-2, including a loss to Kara-France, since graduating up from Dana White’s Contender Series. In my estimation, neither fighter is worth your money here, especially with Paiva’s most recent loss coming by the doctor’s discretion in the first round. When round props come out, the over 2.5 makes sense here with a couple of weaker strikers.

At time of writing, the Macy Chiasson and Shanna Young fight is off the board. Chiasson was originally set to face Nicco Montano, but she withdrew due to injury and Shanna Young will slot in. Young lost on Dana White’s Contender Series last year to Sarah Alper, but she gets a shot here anyway. Chiasson should be a decent favorite and should take care of business, but keep an eye out for a line.

Casey Kenney is +140 and Merab Dvalishvili is -160 in the bantamweight division for this fight at 135 pounds. Kenney, a previous champion in LFA, seems to be stepping up in class a little bit here given the line. He beat Ray Borg and Manny Bermudez to round out a perfect 2019 and only has one loss to his name. Dvalishvili won his only fight in 2019 over Brad Katona. This line is a bit of a head scratcher overall, as Dvalishvili doesn’t exactly have a strong list of prior opponents. You can say the same about Kenney, but until he does something worth fading, his price at +140 is too high.

Devin Clark is a massive -310 favorite and Dequan Townsend is on very short rest here, leading to the number. Clark was originally slated to fight Gadzhimurad Antigulov, but an injury forced him from the fight and now Townsend steps in. This is an extremely quick turnaround for Townsend after going the full 15 with Bevon Lewis back on January 25. You have to like Clark here, but that price is really high.

Jim Miller is back in the Octagon once again. The 36-year-old will partake in his 45th career fight against favorite Scott Holtzman. Holtzman is -140 with +120 on the takeback for Miller. Miller went 2-0 last year with a couple of first-round submission wins. Each of his last five fights has ended with a first-round stoppage. Holtzman fights tend to go a little longer, so that will be interesting to watch. Holtzman hit Dong Hyun Ma enough that doctors wouldn’t let him continue after the second round. This fight will have some fireworks. Holtzman did get knocked down by Ma and maybe could have been behind on the cards had the fight gone the distance. I generally like looking underdog in fights likely to stop early. Miller would be the lean here.

Nathaniel Wood is -165 for his bantamweight fight against John Dodson. The +145 price on Dodson seems justified here with two straight losses and a long layoff. This will be Dodson’s first fight in almost a year since his loss to Petr Yan. If we’re going to get fireworks in the previous fight, we’ll get the opposite here. Dodson is a decision machine. Wood’s layoff is just about as long, as the 26-year-old hasn’t fought since March. He is 3-0 in his UFC career and should move to 4-0 here, as he is more aggressive and should earn favor from the judges if it does go 15 minutes.

Tim Means and Daniel Rodriguez meet in the final fight on the preliminary card. Means is a -260 favorite, so this fight could be something of a dud here. This is the UFC debut for Rodriguez, so he is something of an unknown, but he fought in very small promotions, so he has a lot of questions to answer here.

Early money has hit the board on Lando Vannata for this lightweight matchup against Yancy Medeiros. Vannata is only 1-2-2 over his last five UFC fights, including a loss to Marc Diakiese his last time out in September. Vannata, though, had that fight seven months ago. Medeiros will be shaking off some cage rust. He last fought nearly 13 months ago in a losing effort against Gregor Gillespie.

That was the second loss in a row for Medeiros, who also fell in defeat to Donald Cerrone on February 18, 2018. That’s right, this is just the third fight in essentially two years for Medeiros, which is likely why money has hit Vannata. That and he just has a higher ceiling as a fighter. I have to agree with the line move here.

Let’s see how legit Rogerio Bontorin actually is. He’ll draw a massive step up in class here in Ray Borg after a very impressive start to his UFC debut with a Dana White Contender Series appearance and then wins over Magomed Bibulatov and Raulian Paiva. Borg is a fixture in the flyweight division and a guy that once had a title shot against Demetrious Johnson.

Borg came back from a long layoff to lose to Casey Kenney, but got back on track last time out against Gabriel Silva in a dominating performance. I think this is one of the toughest handicaps of the night given the uncertainty with Borg and the relative inexperience of Bontorin. Both guys have strong ground games, too, so this one is likely to go to the canvas and stay there. That makes this one very tough to pick. Once round props come out, the over 2.5 makes a lot of sense.

Kazula Vargas will be in the Octagon for the second time and Brok Weaver will be making his official UFC debut in this fight. Weaver is yet another Dana White Contender Series find, but he was impressive enough in his win over Devin Smyth to get a shot here with Vargas. Vargas lost his first UFC fight and he is giving up a lot of sizeo to the six-foot Weaver here.

This fight on something of a weak card looks like an opportunity to promote a guy like Weaver. UFC likes to do this with some of its matches and this feels like one of them.

The last of the women’s fights on the UFC Fight Night 167 card is between Mara Romero Borella and Montana De La Rosa. Borella has lost two of her last three fights, but there is no shame in losing to Lauren Murphy or Katlyn Chookagian, who was just on last week’s card with a title shot against Valentina Shevchenko. De La Rosa is 3-1 in her UFC career and she, too, is coming off of a loss to Amanda Lee.

These two fighters are pretty similar from the stats and are similar in size. De La Rosa, though, gets the big -175 price tag. Her ground game is just stronger than Borella’s. It sure seems like the only real path to victory here for Borella is a knockout. She does have three of those in her career and she’ll have to find a way to catch De La Rosa.

There is a chance that this one goes to the cards, but Borella by KO/TKO or De La Rosa by sub is a good way to bet this one. You’ll get nice prices each way.

The lead-in to the main event is between Diego Sanchez and Michel Pereira. Snachez came up short in his last fight against Michael Chiesa and is an underdog here in this fight against Pereira. The -165 favorite also came up short against Tristan Connelly in one of the worst performances of his career. That was Connelly’s UFC debut and Pereira was a -600 favorite. It sure seemed like he took his opponent lightly in that fight.

If Pereira doesn’t do the same here against Sanchez, he should bounce back, particularly with the upside that we saw in that fight against Danny Roberts in his UFC debut. Connelly was also a late add to the card and maybe that caught Pereira off-guard. He’s in a bounce back spot here.

Jan Blachowicz and Corey Anderson finish off this card in the light heavyweight division. This one is slated for five rounds, if those championship minutes come into play. This rematch from UFC 191 looks like it could very well produce a title shot down the line. Anderson won the first fight, but it has been a long time since they went 15 minutes.

Anderson put a beating on Johnny Walker last time out with his first knockout win in nearly three years. Anderson is generally the type of guy that uses his length and athleticism to control fights, as his preferred method of victory in UFC has been by decision. Blachowicz needs a stoppage win here in this one. He just went 25 minutes with Jacare Souza back in November and won by the narrowest of margins to set up this fight.

Anderson is a deserving favorite, the more aggressive fighter, and just the better fighter overall. This looks like a chalky card.