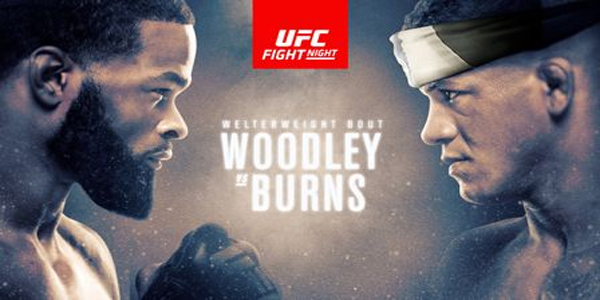 The UFC is back again and back in its Las Vegas home with UFC on ESPN 9, better known as UFC on ESPN: Woodley vs. Burns. Tyron Woodley and Gilbert Burns will meet in the main event of the 11-fight card that will take place at the UFC APEX training center.

Before we dig into the matchups, there is a potential wagering angle here. The UFC APEX Octagon is 25 feet as opposed to the 30 feet of the standard cage. That isn’t a new thing necessarily, as the ring size can be determined by the venue size, but with a little less room to move around, the more aggressive fighters may have an advantage, particularly in fights where the judges come into play. Those that like to keep pushing the issue are going to likely be seen in an even more positive light. UFC 250 next Saturday is also expected to take place at the APEX facility.

Using odds from 5Dimes Sportsbook, let’s break this one down and see if we can’t find some winners.

We start in the featherweight division with Chris Gutierrez and Vince Morales. Gutierrez is the -115 favorite with -105 on the other side for Morales and a total of 2.5 with the over at -320. Gutierrez was a loser on the TUF 28 finale to Raoni Barcelos, but has a couple of decision wins since. Morales went back and forth in an exciting fight with Benito Lopez, but suffered his second defeat in three UFC fights and also lost to Domingo Pilarte on the Dana White Contender Series back in July. This is every bit of a toss-up, since it will likely go to the judges. There are better fights to bet.

Louis Smolka is a big underdog at +225 to Casey Kenney at -265 in the bantamweight division. The over is again juiced heavy at -265 to the over 2.5. Kenney just suffered his first UFC loss back in February to Merab Dvalishvili to bring him down a couple of pegs. He was a champion and a main event fighter in LFA before beating Ray Borg and Manny Bermudez to start his UFC career. Smolka is 2-1 in his second UFC stint. Kenney got humbled last time out and that could end up being good for him. He should get a win here to get some swagger back, as it looks like this is a match set up for him to get a nice win over a good name.

Brandon Royval is +145 against Tim Elliott in the flyweight division with another fight juiced over 2.5 at -135. Elliott is -165 despite losing three of his last four fights in rather ugly fashion. He tapped out twice and also got beat up pretty good by Askar Askarov back in January. Royval won the championship in LFA back in November after losing his first title shot to Kenney in November 2018. Royval may not have the experience of Elliott, but one is on the rise and one isn’t and this is a big opportunity for the bigger flyweight in Royval and he gets the nod here.

Jamahal Hill looks to stay unbeaten at -125 against Klidson Abreu with +105 on the take back. The total for this one is again juiced to the over 2.5 at -185. The 6-foot-4 Hill has a big size and reach advantage in this light heavyweight tilt, but this is very much a step up in class. Hill impressed Dana White on the Contender Series last July and then won his first fight by unanimous decision over Darko Stosic. Abreu has dropped two of his three UFC fights, but he’s the best fighter that Hill will have faced in his young career. Abreu’s two losses in the UFC have come to taller and lankier fighters than him and that looks like the expected outcome here. Hill at -125 is good and Hill by decision may not be a bad grab to get a better price either.

Big opportunities are present for Billy Quarantino and Spike Carlyle in their featherweight fight on Saturday. Quarantino was a Contender Series find and he beat Jacob Kilburn by submission following a dominant Round 1. Carlyle bested Aalon Cruz back in February in impressive fashion with a first-round knockout in just 85 seconds. This should be a pretty good fight of two very hungry fighters. Quarantino is -145 with some higher-profile training, but this could be a war of attrition with two aggressive combatants. Whichever one blinks first will lose. This is a tough call and one of the tougher ones on the board.

The first of two back-to-back women’s fights profiles as the more competitive one as Katlyn Chookagian is +115 against Antonina Shevchenko at -135. The over is the juiciest one on the board at -535 to the over 2.5. Chookagian might have an advantage here in that she just fought and lost to Antonina’s more accomplished sister, Valentina, for the flyweight championship. The Shevchenko sisters should certainly have very similar styles and tendencies. However, Antonina is still pretty accomplished in her own right, with her lone loss to Roxanne Modafferi by controversial split decision last April.

Chookagian has done well in fights to impress the judges in fights that have gone the distance and she certainly has all sorts of motivation here at a short price. I’d be interested in her.

The biggest favorite on the board is Mackenzie Dern for this strawweight fight against Hannah Cifers. Dern is coming off of a pretty surprising loss to Amanda Ribas, but that fight ended a 17-month layoff for Dern and she showed all sorts of rust coming back from the birth of a child. Cifers was beat up pretty good by Angela Hill last time out in her second knockout loss. The other came at the hands of Maycee Barber. It would appear that the expectation is for Dern by stoppage here.

I’m not so sure. Dern is more of a submission artist than a striker. Cifers has lost once via submission. This looks like an over bet to me, even at the -160 price tag. There should be a feeling out process here. Dern should eventually win, but it may take some time.

Brok Weaver steps up in class here as he puts an eight-fight winning streak on the line as a big dog to Roosevelt Roberts. Weaver, who bounced around lesser promotions before getting a Dana White Contender Series appearance last August, won his debut fight over Kazula Vargas by DQ. Vargas had been beating Weaver up pretty good with a huge advantage in strikes across the board. It was going to be a bloodbath that ended with Vargas’s arm raised in victory. That appearance is factoring into the price here, as Weaver draws another active striker in Roosevelt Roberts.

Roberts did suffer his first career loss to Vinc Pinchel last June, but bounced back to top Alexander Yakovlev by unanimous decision in his last fight. The 26-year-old Roberts has an emotional backstory and is a guy that UFC would love to build around. That factors into the matchmaking process and may be part of the equation here, too. Weaver is a good prospect, but Roberts is the biggest fighter and brings a ground game to the table that Weaver hasn’t seen much. Roberts is a more diversified fighter. This is his fight to lose.

Kevin Holland tried to come back on 14 days after fighting in the last event, but his body would not allow it, so UFC newcomer Gabriel Green will step into the fight on short notice. Green is 9-2 in his career, including a stint in Bellator, and all nine wins have come via stoppage. Rodriguez is 11-1 with a 1-0 record in the UFC. He beat Tim Means last time out.

Odds were not posted at time of writing for the fight, but it looks like it will be an exciting one.

The only heavyweight fight on the card is this one between Blagoy Ivanov and Augusto Sakai. Saki has a big size and striking advantage in this fight, as he is the more active fighter and the more accurate fighter, but Ivanov has a strong ground game that could really come into play with his lower center of gravity. Ivanov just went the distance with Derrick Lewis after wins over Tui Tuivasa and Ben Rothwell, which is why he gets the respect despite the size edge for Sakai.

This will be an interesting fight stylistically. Sakai has 11 knockout wins out of his 14. Ivanov has never been knocked out. Can Sakai score the first knockout? If he can’t, can he win via decision? Given that Ivanov has the ground game and could control the fight there, it could really tire out Sakai. I’m looking at the slight underdog here given that he’s had to show a lot more of a gas tank on the endurance side than the favorite.

The main event features Gilbert Burns and Tyron Woodley. Is a welterweight title shot in line for the winner? We’ll have to wait and see, but Burns is looking to build off of his first-round knockout of Demian Maia just before UFC shut down due to the COVID pandemic. That was Burns’s first knockout in nearly two years. He’s had plenty of wins and other modes of victory in that span, but it was nice to show some big striking power in advance of this fight with Woodley.

Woodley is back after a long layoff. The former champion lost to Kamaru Usman at UFC 235 and has not fought since March 2, 2019. Woodley had a fight against Robbie Lawler canceled when he hurt his hand in training and then had a fight with Leon Edwards canceled because of COVID. Now he draws Burns in a fight that, quite frankly, might be better for him than the other two, especially the Edwards draw.

That said, this has been a long layoff for Woodley and Burns has been fighting and has been impressive in the process. Laying the big number is tough here. Woodley does have more experience in the championship rounds, so he gets the nod, but there are better bets than laying -175 in the main event.