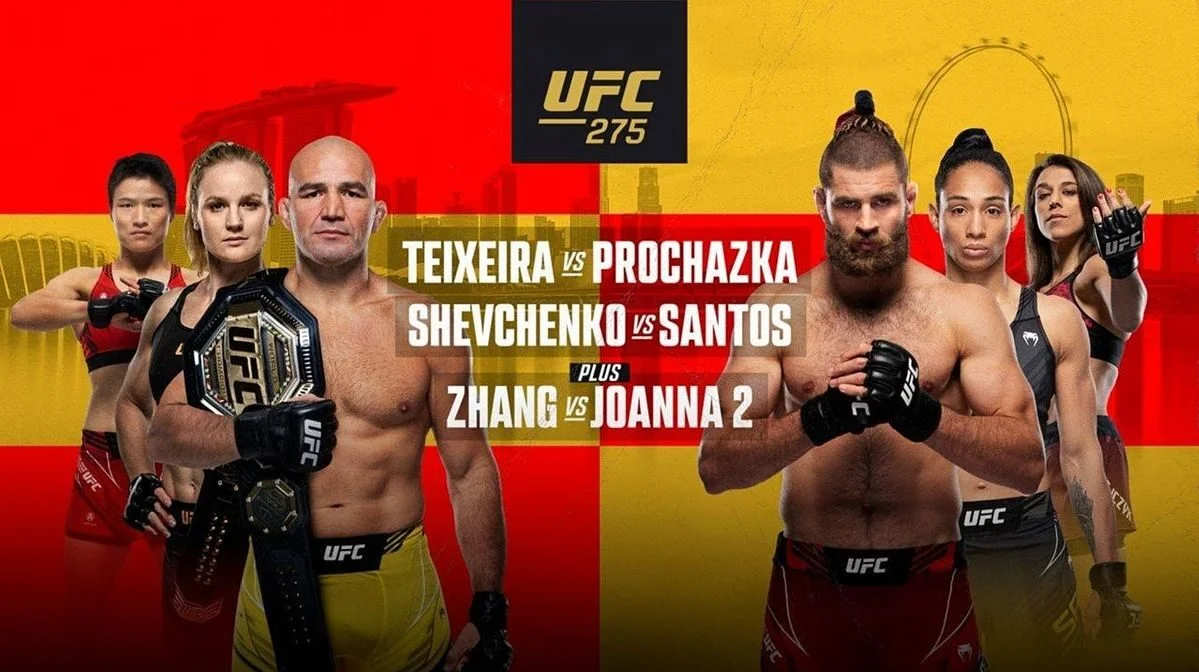 After an entertaining Fight Night on Saturday, the MMA focus now shifts to UFC 275, which will take place in Singapore. It’s the fifth time the promotion heads to the island country in Southeast Asia and it should be a banner event as there will be two belts on the line.

With the betting odds up on the board at BetAnySports.eu, let’s take a closer look at the top three fights and see where the betting value lies.

There’s an interesting situation in the main event of the evening as Teixeira, who is the defending Light Heavyweight champion, is actually an underdog to Prochazka. It’s not often you see that but Teixeira – even as champ – is only ranked No. 8 in the pound-for-pound rankings in the division while Prochazka is No. 2.

While Teixeira has had an admirable career, the reality is that he’s 42 years old and might be out of his depth here. Sure, he beat Jan Blachowicz and is riding a six-fight winning streak but he’s in the twilight of his career. It might not have shown against Blachowicz and other lesser competition, but it probably will here.

Prochazka has been on a fast rise up the UFC ranks, knocking out his first two opponents in the promotion. He has looked incredible in the process against Dominick Reyes and Volkan Oezdemir, and has now knocked out his last 10 opponents. It feels like he’ll get the win here and likely in the same fashion. ‘Prochazka by KO’ prop looks like it’s a good value play here.

Shevchenko is the No. 1 women’s pound-for-pound fighter and anything but dominance here would be a disappointment. She’s 22-3 in her career and has won eight in a row, defending her Flyweight belt seven straight times. The UFC has struggled to find her a credible opponent, which is why Taila Santos is being tossed in – even if she maybe hasn’t proven herself enough. Santos is 19-1 and has won four straights, but she hasn’t fought a ton of quality UFC fighters. She did choke out Joanne Wood in the first round in her most recent bout but other than that, she’s 3-1 in the UFC with three decision wins. Shevchenko is not something that she’s ready for.

This bout and rematch should be one of the most entertaining on the card as both fighters love to move forward. Both can do a lot of damage and take a lot of damage, so it’s hard to see anything but a lot of action.

Both fighters are looking for a bounce back but Jędrzejczyk needs it more. Her last outing was a split decision loss to Weili, which now makes four losses in her last six. Considering she was a perfect 14-0 before that, this is a big slump. What she has going for her is that all of her losses are to elite competitors and some at a higher division where she didn’t have much success. Outside of her loss to Weili, her other three recent losses were to Shevchenko and Rose Namajunas (twice), so it’s nothing to be ashamed of.

As for Weili, since beating Jędrzejczyk, she’s suffered back-to-back losses to Namajunas. She is No. 2 in the strawweight rankings and had the upper hand versus Jędrzejczyk in the first meeting. Jędrzejczyk has gone downhill since and hasn’t even fought since March of 2020, so it’s hard to see her having the edge.