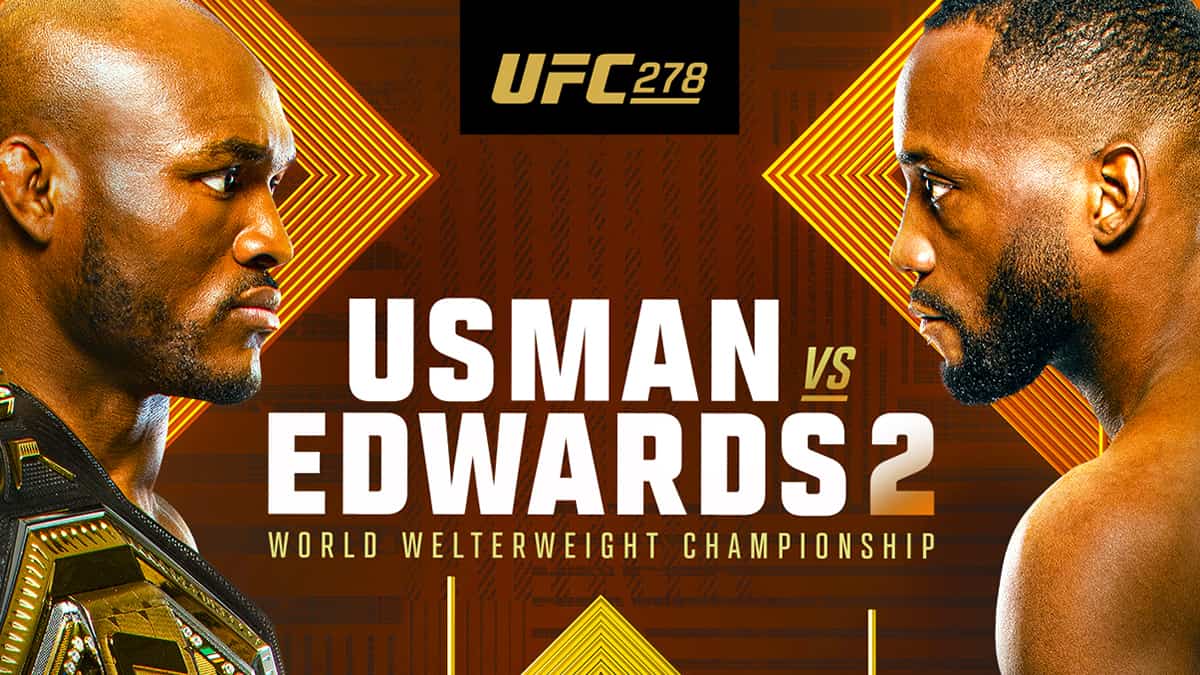 UFC 278 is coming up on Saturday and the main event will be a delicious rematch between two fighters that haven’t seen one another in years. The champ, Kamaru Usman, has risen to the top of the class while Leon Edwards has fought well but fallen just short of a belt. Is he ready to reach the peak now?

Let’s take a look at the three best bets for this weekend’s extravaganza.

All odds provided by BetAnySports, sign up now and get a 55% new user welcome bonus!

Kamaru Usman will be aiming to protect his belt once again – this time against Leon Edwards here. Usman is looking to get his sixth successful title defense along with his 16th straight victory in the UFC. Coming into this fight, Usman has never lost in the UFC. He’s even defeated Edwards early on in his time here.

Edwards has had a lot of time to improve since that defeat back in 2015 and he’s also not lost a single fight since that showdown. He’s won eight straight – including some big ones against Rafael Dos Anjos and Vincente Luque. However, he a long inactive period – didn’t fight once in 2020 – and that slowed his ascent.

Many people have been waiting to see Usman and Edwards compete against one another again now that they’ve become two dominant forces. Could this possibly be the fight that Usman loses in the UFC, or will he just keep on trucking forward with his 16th consecutive win?

It feels like Usman’s ground game will be too strong for Edwards. The latter will try to keep this standing but he doesn’t have enough of an edge there to pull this upset off.

Paulo Costa will be taking on Luke Rockhold in the co-main event here. Costa won 13 straight victories to kick off his fighting career. However, he’s lost his past two fights coming into this contest. There is no question that Costa could be a deadly opponent when he’s focused and prepared; we just haven’t seen it in a quick minute. He was a heat-seeking missile to start his MMA career but a knockout at the hands of Israel Adesanya rocked him. It seemed to linger in a loss to Marvin Vettori in his latest outing. The question is can he shake it here?

As for his opponent, Rockhold, he knows what that feeling is like. He won the UFC Middleweight Championship belt and then was knocked out by Michael Bisping. He was 15-2 after the win; he’s dropped three of four since with all three being knockout losses.

He will be making it into the Octagon for the first time in over three years. He took time away to deal with some injuries and regain his commitment to fighting his way to the top of the ranks again. This could be one interesting way for Rockhold to come back out of the shadows if he can get a win.

Jose Aldo didn’t have a great start in the bantamweight division when he first appeared. He lost both of his first two fights in the weight class, but since then has completely turned it around. He’s won three straight fights to establish himself as a contender – even at a time many thought the 35-year-old was finished.

However, Merab Dvalishvili currently stands in his way of inching closer to the top of the rankings. Dvalishvili has won seven straight fights and is coming off a knockout win over Marlon Moraes at UFC 266. It feels like he’s got a decent shot here, so consider him as a live dog.