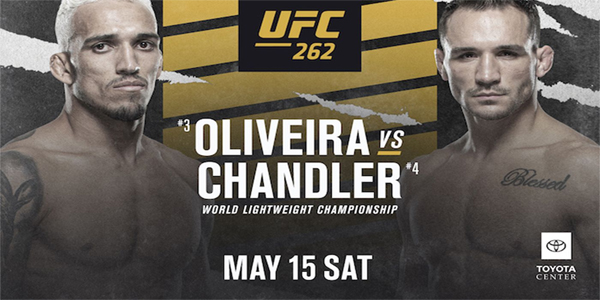 UFC 262 will be at the Toyota Center in Houston, Texas. With a full crowd of 17,000 fight fans. It should be another celebration for the promotion after the three title fights on the UFC 261 card that thrilled fans down in Jacksonville, Florida. It will be good for Dana White to get the gate receipts and also good for the fighters to be back in the adrenaline-filled environment of an arena filled with screaming, cheering fans.

Thirteen fights are on the card, headlined by a matchup for the vacant lightweight championship between Charles Oliveira and Michael Chandler. Khabib Nurmagomedov retired, leaving the belt open, so it will be decided in the main event of this UFC 262 card.

Eleven other fights are scheduled, barring any late changes or positive COVID tests. We’ll use the odds from BetOnline Sportsbook to break it all down.

At time of writing, no line was posted at BetOnline for this late addition to the fight card. Other sportsbooks had Giagos lined in the -180 range with +155 or +160 on Soriano in the underdog role. Soriano was 0-3 in the UFC during a quick cameo in 2014 and 2015. He’s on a nice three-fight winning streak now, but Giagos, who has won three of his last four in the UFC is the big favorite. Each of the last four for Giagos has gone the distance, so look for this one to do the same.

Kevin Aguilar has dropped three in a row as he squares off against Tucker Lutz at 145 pounds. Lutz is making his UFC debut after winning twice on Dana White’s Contender Series to improve to 11-1 in his pro career. Both wins were by unanimous decision and were strong enough to put Lutz on this card. The 26-year-old Lutz is a step down for Aguilar, but with Aguilar on nearly a one-year layoff and with three losses in three fights, you can see why the money has hit the board on Lutz for this one.

Gina Mazany is a big favorite at 125 pounds against Priscila Cachoeira. Mazany has lost three of her last four UFC fights, but mixed in a win in KOTC last January. She beat Rachael Ostovich back on November 28 to get back in the UFC win column and improve to 7-4 overall. The 32-year-old is just 3-4 in the UFC. That sounds like a similar resume as Cachoeira, who is 1-3, but did score her first win against Shana Dobson by surprise first-round knockout on February 22. She hasn’t fought since then, so this is a long layoff, which is part of the reason behind the big price. This is not a great fight for betting purposes.

What appears to be a competitive fight in the middleweight division will feature Jordan Wright and Jamie Pickett. Wright is looking to bounce back from the first defeat of his career after losing to Joaquin Buckley last November at UFC 255. Wright was well behind in the fight after the first round, but Buckley’s second-round KO removed all doubt. Wright had been the aggressor and the punisher in his previous 11 fights, so we’ll see if he can get back to it here against Pickett.

Pickett, meanwhile, also lost last time out. He went 15 minutes with Tafon Nchukwi, who was a loser this past weekend by majority decision to Junyong Park. Pickett has never been knocked out, but has tapped out twice. All 12 of Wright’s fights have ended with a stoppage. He has six wins by KO, five wins by submission, and the KO loss to Buckley. Pickett has lost three times by decision and won twice. Will he be able to keep Wright at bay? Will he have to win by KO? I think Wright has a lot more paths to victory here.

Antonina Shevchenko is 4-2 in UFC with losses to Katlyn Chookagian and Roxanne Modafferi. Those are two veteran, experienced fighters. Andrea Lee is a veteran of 16 fights herself, but she, too, has a decision loss to Modafferi to her name. She’s looking to end a three-fight losing streak in this matchup with Shevchenko.

Shevchenko is 5-2 in decisions, while Lee is now down to 5-4 with how things have gone for her recently. She lost twice by split decision before the more lopsided loss to Modafferi. The 32-year-old started off strong in the UFC with three wins and has been a titleholder three times, but her most recent fights have not been good data points. All six UFC fights have gone the distance for her, hence the -375 on over 2.5. Shevchenko should be the aggressor and more tactically-sound fighter here at the reasonable favorite price.

Lando Vannata and Mike Grundy are also lined pretty closely, as this looks to be a more competitive card than what we saw last weekend. Grundy suffered just the second setback of his MMA career last time out against Movsar Evloev. Evloev is undefeated at 14-0. Grundy’s only other loss was back in 2015 to Damian Stasiak, who was released from UFC in 2018 and is now fighting in much smaller promotions.

Vannata is just 2-2-1 in his last five fights. Each of the last three has gone to a decision and he’s been on the short end twice. Grundy doesn’t have the best list of wins. He got nothing going against Evloev, as he landed fewer than 30 strikes over 15 minutes. Vannata doesn’t seem to be the same type of wrestler of Evloev. Grundy at a short price looks like the side here.

The fight world may have bid adieu to Donald Cerrone last weekend as he lost as a big favorite to Alex Morono and just looks to be done. What will happen here with another staple of MMA in Jacare Souza. Souza has lost four of his last five fights. He was knocked out at UFC 256 by Kevin Holland for the first time since Robert Whittaker did it back in 2017.

This is an enormous step up in class for Muniz, who beat Bartosz Fabinski in September for his sixth straight win and fourth in UFC. He also beat Antonio Arroyo. Souza’s record of success dwarfs the resume of the two UFC wins for Muniz under contract. Muniz is 10 years younger. He has more reach. But, he’s also not Kevin Holland or Jan Blachowicz, the two most recent guys that Jacare has lost to. It’s a tough call, but Muniz is probably the pick here.

Rogerio Bontorin was a late replacement in this fight for Alex Perez. That could be a sigh of relief for Matt Schnell, who is a -160 favorite against Bontorin. This fight was agreed to last month and will be fought at bantamweight. Most data points for these two guys have been at flyweight, but there were concerns about the weight cut for Bontorin with the late switch.

It’s hard to gauge if that helps or hurts one fighter over another. Both guys are better on the ground. Schnell is the taller fighter, so maybe the additional weight coupled with longer reach and range will help him gain and maintain top control. He has eight submission wins to his name. Bontorin has 11, though he has lost his last two fights and hasn’t had many stoppage wins lately. Schnell looks like the guy here, but -155 is a big price.

The main card starts with another veteran name in Edson Barboza. Another veteran name that has lost three of his last four fights. Barboza beat Makwan Amirkhani by unanimous decision in a very boring fight last October in Abu Dhabi. Barboza landed 34 strikes total in that fight. Amirkhani landed just 25. Shane Burgos should be a lot more aggressive than that and you wonder about the chin and the quickness of Barboza now that he’s 35.

On the other hand, much like the last fight, Burgos is not really Dan Ige, Paul Felder, Justin Gaethje, or Dan Hooker, the guys that Barboza fought between taking on Amirkhani. Burgos throws a lot, but he hasn’t really had much knockout power in his last three fights. It took a while for him to beat Amirkhani by KO.

Tough fight to call here, but I’d lean with Barboza if he can make this one boring.

Katlyn Chookagian has won her last three fights when she has been the better fighter. Her two losses are to Valentina Shevchenko and Jessica Andrade, two of the best in the women’s game right now. Where does Viviane Araujo rank in the pantheon of current female fights? Would it be fair to say that she is closer to Cynthia Calvillo, Antonina Shevchenko, or Jennifer Maia?

If that’s the case, then you have to look at Chookagian here at that -132 price. It really like she’s been punished for losing to fighters that are simply better than she is. Araujo has won four of her last five, but who has she really beaten in that span? Add in the big size advantage for the 5-foot-9 Chookagian and this looks to be my favorite bet on the card.

This fight was postponed to next week because of a COVID case with Hermansson’s camp.

The long and circuitous road that Beneil Dariush has taken this point may finally be rewarded. The winner of this fight could very well get a title shot against the winner of the main event. Dariush is a big favorite to get that title shot. Tony Ferguson’s last real win came on October 6, 2018 against Anthony Pettis, but we’ve seen what has since happened to him. The win over Donald Cerrone means nothing. Ferguson’s last two fights have been losses to Justin Gaethje and Charles Oliveira.

The question we have to answer is whether the 37-year-old is in the twilight of his career or if the caliber of opponents he has lost to are the difference. Enter Beneil Dariush, who has won six in row, but he hasn’t fought the likes of who Ferguson has lost to and probably isn’t on that level either. I think this line is punishing Ferguson a little too much for what has happened recently. It’s still a tall ask to win here, but I think the price is right on him.

It is tough to think of an ascent like what Michael Chandler has experienced. After years of paying his dues in Bellator and lesser promotions, he’ll get a UFC Lightweight Championship shot in just his second UFC fight. His win over Dan Hooker was extremely impressive, but it took Chandler a while to get to this point and now he’s right in the spotlight.

What an opportunity for Charles Oliveira. He’s been on UFC cards since the promotion was on Versus back in 2010. He’s been around a long time and fought a lot of fighters. When you look at his eight losses, though, you see Jim Miller, Donald Cerrone, Cub Swanson, Frankie Edgar, Anthony Pettis, Max Holloway, Paul Felder, and Ricardo Lamas. Sure, Oliveira has won eight straight fights, but when has he ever beaten a fighter at or near the top of the division?

Kevin Lee and Tony Ferguson in 2020 look to be his best wins ever. Ferguson is on the backside of his career and Lee has lost three of four. Chandler deserves to be the underdog here, but he could very well be a champion on Saturday night.