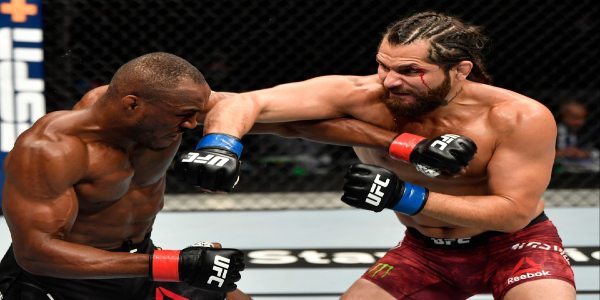 Jorge Masvidal has been in the Octagon with Kamaru Usman before. And the whole experience turned out not to be pleasant. He expects things to be a lot less chaotic as he gets another shot to win the UFC Welterweight championship.

That’s going to happen at the Veterans Memorial Coliseum in Jacksonville on Saturday, April 24. UFC 261 is a pay-per-view event, of course, and you’ll be able to follow along with the action much better if you have taken advantage of wagering on all the props on the card that have been furnished by the people at BetOnline.

Usman is the guy who’s got almost a spotless record of 19-1. He is on a 17-fight winning streak, with 13 of those wins coming in the UFC. A native of Nigeria, he is a former NCAA Division II wrestling champion (University of Nebraska-Kearney), he entered the UFC through The Ultimate Fighter, and gradually worked his way up the ranks. In March 2019 he decisioned Tyron Woodley to win the welterweight title. He’s defended three times, the last time in February as he stopped Gilbert Burns in three rounds.

Masvidal is a guy who has been all over the place, fighting for a slew of different promotions. He has won “Performance of the Night” four times in the UFC, where he startled everybody in July 2019 when he hit Ben Askren with a flying knee and knocked him out in five seconds. That’s a UFC record, and he punched Askren’s exit ticket 114 seconds sooner than Jake Paul just did in a hands-only bout.

Other notable wins include a second-round TKO of Donald Cerrone in January 2017 and a stoppage on cuts over Nate Diaz in November 2019 (UFC 244). When Usman’s opponent at UFC 251, Burns, was shelved with COVID-19, Masvidal took the fight as a substitute. The fight was rather uneventful, as Usman controlled the action virtually from beginning to end on the way to a decision victory.

Now Masvidal has had sufficient advance time to get ready, and promises a radically-different outcome.

Here are the UFC 261 betting odds on the main event, as they are posted at BetOnline:

To say that things did not go well for Masvidal the first time around would be something of an understatement. But those who support him are quick to point out that he had to cut about 20 pounds within a 5-6 day period. In the rematch, that’s not going to be the case.

Now, having said that, does he have enough class to reign supreme here?

Well, he would have to see him present something that, stylistically, presents a puzzle for Usman. Remember that Masvidal is a noted striker, but he is not well-regarded as a wrestler. And clearly Usman is going to seek to grapple, as that increases the level of his advantage. We already know that.

At the same time, we can say that Usman did not have a lot of time to train for Masvidal last time out. We say that because he was actually training for a different kind of opponent; someone who was coming at him in a different way than Gilbert Burns was expected to.

We might also note that he beat Burns on strikes, so he is not necessarily weak in that area.

But for this rematch, he’s had a lot of time to prepare himself for this opponent. And he is fully prepared to ride it out and go the distance, as that is what five of his last seven bouts have done. Fights that “go long” might tend to favor the guy who can keep it on the ground, and is better at it, because you can kill more of the clock that way.

How we visualize this thing just doesn’t “trend” toward a Masvidal victory.

Bet the UFC and all mixed martial arts events at BetOnline, where you’ll get plenty of props on UFC 261…… Remember that Odds Boosters are available every day to give you excessively awesome payouts on pre-selected parlays……. And there is always a way for you to get into the action easily. That includes cryptocurrencies like Bitcoin. It’s all seamless, and you can start playing almost immediately!