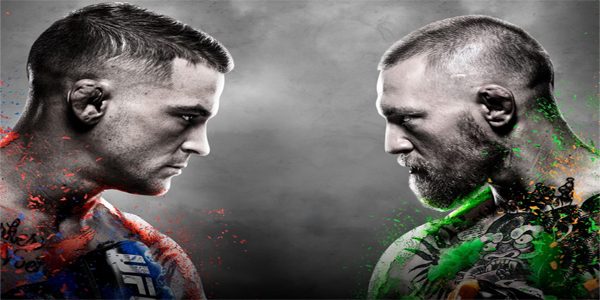 The first major card of 2021 for UFC features a rematch of a fight that happened more than six years ago. A lot has changed for Conor McGregor and Dustin Poirier. The one thing that hasn’t changed is that fight fans are really excited to see this matchup, much like they were the first time around.

At that point, Poirier was a rising star in the division that had losses to Chan Sung Jung and Cub Swanson. McGregor was a bigger prospect, having beaten fellow star prospect Max Holloway two fights prior. McGregor won by first-round knockout and would find himself fighting for the featherweight championship just 10 months later.

Twelve fights are on the card and we’ll break them all down, but pay extra attention to the main card with help from the odds at BetOnline Sportsbook. You can get a 100% Deposit Match Bonus from BetOnline in advance of the fight card if you sign up through us at BangTheBook.

This is a loaded card from top to bottom, beginning with a couple of good newcomers to UFC. The second career UFC fight for both Amir Albazi and Zhalgas Zhumagulov kickstarts this UFC 257 slate. Zhumagulov lost back in July to Raulian Paiva in his debut. The former FNG champ, who beat UFC fixture Tyson Nam for the belt, is a short favorite to improve to 14-4 in his career and score his first UFC win. Each of his last five fights has gone the full 15, hence the heavy over chalk on the total.

For Albazi, this is a chance to improve to 2-0 in the UFC. Since suffering his first career loss to Jose Torres in Brave CF, he has wins over Ryan Curtis and Malcolm Gordon. Torres had a couple cups of coffee in UFC, so it’s not Albazi lost to a bum. This looks like a good opening fight, but the total would point towards Zhumagulov. Albazi has 13 career wins, 12 by stoppage. If this is going to go the distance, that probably benefits the favorite the most.

There doesn’t seem to be much to say about this fight. Movsar Evloev is the big -440 favorite here with a perfect 13-0 record. Evloev is 3-0 in UFC with three decision victories. The former M-1 champ draws longtime UFC undercard fighter Nik Lentz. Lentz has lost his last two fights and this line seems to imply that he won’t put up much resistance here. This will be a good test for the 26-year-old Evloev against an experienced 36-year-old Lentz, but this is really just a test to pass to move up to better opponents.

Uzbekistan native Makhmud Muradov has six career losses, but he’s riding a 13-fight winning streak into this matchup with Andrew Sanchez. You have to give Muradov a lot of credit. His career started off with a 4-4 record, but since December 2013, he only has two losses against 20 wins. Andrew Sanchez has a pretty long UFC history, but he’s been underwhelming for the most part. His KO win over Welington Turman feels like an outlier and that recency bias has put Muradov at a good price here. I like the favorite as one of my stronger plays on the card.

Marcin Prachnio has his back against the wall here. Three straight first-round knockouts have him in danger of being cut from the UFC. These losses, against Mike Rodriguez, Magomed Ankalaev, and Sam Alvey, represent all of his UFC data points. Rountree is in a big spot here himself. He hasn’t fought since September 28, 2019, when he was knocked out by Ion Cutelaba. He is a prospect that hasn’t lived up to his promise. This feels like a “get right” fight for Rountree, who is a capable money line parlay piece for those that don’t want to lay the heavy chalk.

Julianna Pena’s return to the Octagon did not go as expected. After well over a year on the sidelines, she came back to fight Germaine de Randamie and was finished for just the third time in her career. Pena lost by third-round submission in a fight that looked to be very even at the time of the finish. In fact, Pena was probably ahead on the cards by having a lot of top control. Instead, she got finished.

Sara McMann did not fight throughout the pandemic, as she beat Lina Lansberg in January and then had a fight against Aspen Ladd canceled because of an injury to her opponent. McMann is 40 years old, but she had that great performance against Lansberg in her first fight in 23 months. She owned the fight on the ground. I wouldn’t expect the same here against Pena, though. The underdog is my pick in this one.

Antonio Carlos Junior needs a win here. Consecutive losses to Ian Heinisch and Uriah Hall, plus an extended layoff, put a little bit of pressure on the underdog in this middleweight contest. The 30-year-old fought to decisions against those two, which is not his style. He needs to control the fight on the ground and lock in submissions, like he has in nine of his 11 wins.

This is another one where the heavy over juice on the total is concerning because this is not the style of fight he wants. Brad Tavares is a decision machine. Only 11 of his 24 fights have ended in a stoppage, although his most recent fight was one of them in a loss to Edmen Shahbazyan. Taveres didn’t fare well with a long layoff in that fight. I wonder if he’ll do better here. I don’t see a great edge in this fight.

Doesn’t this line feel a little chalky? Nasrat Haqparast has done well in the UFC with four wins in his last five fights after a debut loss on the big stage with a huge step up in class. Arman Tsarukyan also lost his UFC debut, but rides a two-fight winning streak into this one. Haqparast has the size advantage in this fight between mid-20s combatants. The one big difference seems to be Tsarukyan’s ground game. Haqparast wants the fight upright. Tsarukyan seems fine either way, but his five submission finishes suggest he’s good on the mat. Maybe he has more paths to victory, but the +220 isn’t a bad gamble here if you want to play a dog on the prelims.

Amanda Ribas looks like a good parlay piece with Khalil Rountree from the prelim card. The first fight on the main card comes from the women’s strawweight division and features Ribas, who gets a real opponent now after taking quick care of Paige VanZant last time out. Marina Rodriguez is a quality fighter, but she is 2-1-2 against roster talent in the UFC.

Her most recent loss to Carla Esparza was a decent performance, but she hasn’t shown any above average striking ability. Her win against Jessica Aguilar seemed to prop up her prospects, but she’s come back to earth in this division since and this line is indicative of that.

This is a pretty good step up in class for Ottman Azaitar, who is the -156 favorite at 155 pounds in this fight. This is only his third UFC fight, with wins over Khama Worthy and Teemu Packalen en route to his 13-0 record. Matt Frevola is a well-trained 30-year-old from the Serra-Longo Fight Team that hasn’t really found his UFC groove yet. He lost his fight to Polo Reyes and followed that up with a draw against Lando Vannata before a couple of decision wins.

This is a hard fight to figure out. The reality is that we don’t really know a whole lot about either guy here in the sense that limited UFC data points and results, plus a variety of inconsistent opponents, give us a hard sample size to analyze. Frevola’s classical training could outweigh that of Azaitar in his hardest fight to date. Azaitar by KO seems to be the right way to attack this based on the side and total lines, as Frevola needs to win by decision. Maybe Azaitar inside the distance and Frevola or Frevola by decision to maybe get a little arbitrage here. Azaitar only has one decision win and I don’t see another one.

Jessica Eye returns for the first time since going 25 minutes with Cynthia Calvillo back in June. It was a long, drawn-out fight for Eye, the first time she had ever gone 25 minutes in a fight. And she took some serious abuse in that one, as Calvillo doubled her up in strikes and controlled the fight in every which way. We’ve seen that hangover effect in fights before and we could see it here.

On the other hand, Joanne Calderwood hasn’t done well lately. She’s coming off of three straight subpar performances, including a stoppage loss to Jennifer Maia on August 1. The 35-year-old Calderwood is a very active fighter, but she doesn’t have the gas tank that Eye has. To me, that is significant here because of the high juice on the over 2.5. Calderwood is a very active fighter, but Eye is a very smart fighter. These are two different styles and it will be interesting to see which one wins out. I do like Eye to bounce back here.

Longtime Bellator fixture Michael Chandler will make the leap to UFC to take on Dan Hooker. Chandler has been in lots of title fights, but this will be his first opportunity to fight in the UFC. He hasn’t really taken on a lot of UFC-level competition in Bellator either, having faced Benson Henderson and Eddie Alvarez.

Dan Hooker has fought some of the best that his division has had to offer, including his most recent fight going 25 minutes with main event contestant Dustin Poirier. Hooker is the deserving favorite here. Nobody denies what Chandler has accomplished in his career, but Hooker is a very good wrestler and a quality striker. If Chandler tries to be aggressive early, Hooker will find openings to take over the fight and that’s my expectation here.

Conor McGregor will have his first real fight since UFC 229 when he faces Dustin Poirier. Donald Cerrone is a show pony at this point. He’s there to put fighters over and be a big draw. He’s not a reliable UFC fighter anymore. So McGregor’s first-round knockout of Cerrone at UFC 246 means nothing. How does McGregor look here against a very talented, extremely hungry fighter in Poirier?

We’re essentially talking about two legitimate fights in the last 4+ years for McGregor. He lost to Khabib Nurmagomedov at UFC 229 and beat Eddie Alvarez on November 12, 2016. There are a lot of questions here with McGregor, who takes on a guy in Poirier that has only a handful of losses to his name. One did come against McGregor back in 2014, but these two fighters are not the same. Not even close.

To me, this line is too high. We all know the striking power of McGregor, who is a wildly polarizing figure for the UFC, but we also know that Poirier is one the most technically sound strikers in the division. I think the +260 is worth a shot here, particularly if this fight starts going long and McGregor is forced to showcase some endurance.