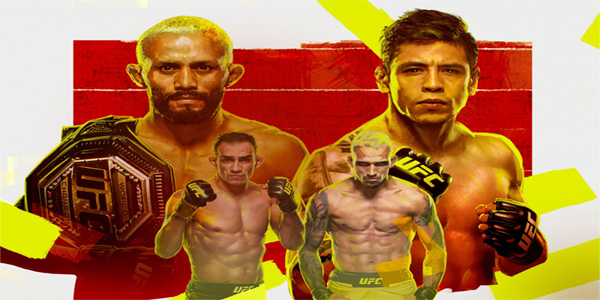 Flexibility has been a big reason why Dana White and the UFC have been able to navigate the pandemic and provide fight fans with a lot of events. The main event for UFC 256 has changed three times. It will be Deiveson Figueiredo vs. Brandon Moreno for the UFC Flyweight Championship.

The two combatants fought just 21 days ago at UFC 255, making this the fastest turnaround time for a title fight ever. Credit to Figueiredo and Moreno from forcing the promotion into a PPV without a title fight. Kamaru Usman vs. Gilbert Burns was supposed to headline the card, but Usman is recovering from some injuries.

The next option was Amanda Nunes vs. Megan Anderson, but Nunes postponed about a month ago and those two will fight next year, hopefully with fans in attendance.

The third option was Petr Yan vs. Aljamain Sterling, but both fighters ran into issues and that fight will come next year as well.

So Figueiredo and Moreno will duke it out in what is something of a lackluster card as far as pay-per-view events go. Then again, luster is never lacking when you can bet on something.

We’ll use odds from BetOnline Sportsbook to look at the 12 fights on the card, which has been adjusted already due to positive COVID-19 cases.

Chase Hooper won his first UFC fight against David Teymur, but then the 21-year-old ran into a very experienced Alex Cacares at UFC 250 and came up on the short end. It was a 30-27 domination across the card for Cacares, who improved to 17-12 in his career. It was a tough setback for Hooper, but he’ll be fighting 34-year-old Peter Barrett, who is 1-1 in his UFC career, with a win on the Dana White Contender Series and a loss in his first contract fight to Youssef Zalal. Hooper will be a good parlay piece here in a bounce back spot.

Li Jingliang last fought at UFC 248 against Neil Magny. Right around that time, UFC shut down. Jingliang was supposed to fight Dwight Grant, but he tested positive for COVID, so now Jingliang is awaiting an opponent. His loss to Magny stopped a three-fight winning streak. If he stays on the card, Jingliang should be a favorite against a short-notice replacement.

Jared Vanderaa earned himself a contract with a first-round knockout of Harry Hunsucker back on November 4 in the Dana White Contender Series. Vanderaa did make a cameo appearance in LFA last year and lost to Renan Ferreira, who has not fought since. This is a step up to face Sergey Spivak to say the least, as Spivak is a veteran of four UFC fights. He is only 2-2 and hasn’t been overly impressive, though. Spivak did deal Carlos Felipe his first career loss back in July to even his UFC record. Vanderaa does have three submission wins, but he prefers to strike, whereas Spivak doesn’t mind getting down and dirty on the canvas. Spivak probably isn’t worthy of this big of a favorite role, but you can cut into the vig a bit with Spivak by submission and take your chances with that. Six of his 11 wins have come via submission.

Initially, Tecia Torres was supposed to face Angela Hill, but Hill got the rona, so now promotional newcomer Sam Hughes steps in. Hughes is 2-1 in LFA this year and she even got an immediate strawweight title shot against Vanessa Demopoulos. The 28-year-old Hughes could be dangerous here. Torres only has one finish in 11 wins. Hughes is four inches taller and the longer fighter. She also has a decent ground game with three submission wins. She’s an unknown and Torres is a decision machine, but +350 seems like a good gamble on Hughes.

Gavin Tucker is off to a 3-1 start in the UFC, but just about all of the betting action has been on Billy Quarantillo for this fight. Quarantillo does have a big size advantage in this matchup against Tucker, whose last two wins have come by submission. The 32-year-old Quarantillo is 3-0 since getting a UFC contract and 4-0 overall with his Dana White Contender Series win. It makes sense to trust the money here, as Quarantillo looks to be pretty legit and his grappling game is much stronger than Tucker’s.

Submission expert Virna Jandiroba brings a 16-1 career record into this fight against Mackenzie Dern and she is a big underdog to pick up the victory. Jandiroba lost her UFC debut to Carla Esparza, but won via submission over Mallory Martin and Felice Herrig to quickly move on from her only defeat. Dern’s lone loss came against Amanda Ribas last year. This is a step up in class for both fighters, though. These are two of the division’s top grapplers and ground fighters. This is a main card fight stuck on the undercard for some reason. The price on Dern looks a little bit steep when you look at the bodies of work for both fighters and consider the similarities between the two.

Cub Swanson has had a great MMA career and has been a longtime UFC fixture, but this line is suggestive of his future with the promotion. Swanson beat Kron Gracie last October to end a four-fight losing streak. He hasn’t fought since. He’s now +140 against Daniel Pineda, who scored a very impressive win over Herbert Burns back at UFC 252 in August in what was his first UFC fight since 2014. There may be some recency bias in this price, but the idea that Pineda, who was out of the top MMA promotion for more than six years, is this clear of a favorite over Swanson says a lot.

GET A WELCOME BONUS FOR UFC 256 AT BETONLINE SPORTSBOOK

Will this be the end for Cigano? Junior Dos Santos is a massive underdog against Ciryl Gane and the very real possibility of losing for the fourth straight time via knockout exists. Dos Santos last beat Derrick Lewis on March 9, 2019. Since then, Cigano has lost to some very good heavyweights in Francis Ngannou, Curtis Blaydes, and Jairzinho Rozenstruik.

It’s almost as if Cigano is playing the heavyweight version of Donald Cerrone by putting younger fighters and prospects “over”, much the way it happens in the wrestling entertainment world. Gane fits the bill here. This is the first “name” opponent for Gane, who is 3-0 in the UFC. As we can see, Gane is -450 to get the win. This feels like a Cerrone style fight and that means Gane and Gane impressively.

Another legend of the sport is on the card in Ronaldo “Jacare” Souza. Like Cigano, Jacare’s best days are behind him. He’s lost three of his last four and hasn’t fought since November 16, 2019. He did test positive for COVID earlier this year to lose a scheduled fight, but the 41-year-old is clearly in the twilight of his career.

Kevin Holland will be fighting for the fifth time in 2020. He’s won all four of those fights. The 28-year-old is going to be a matchup nightmare for Jacare. He’s quick, he’s versatile, and very aggressive. Jacare doesn’t have the striking power that he once did. The saving grace for Jacare could be his ring IQ, but with nowhere to go in the smaller UFC Apex Octagon, Holland will keep coming. While Jacare is used to going 25 minutes as a main event fighter, he’ll only have to go 15 here, but Holland is the taller, longer, faster fighter. This line feels mispriced.

Renato Moicano fought on the last UFC card before the shutdown on March 14 and beat Damir Hadzovic in a nice performance to come back from consecutive knockout losses. He’ll have to pull a mild upset here to avoid a third loss in four fights when he draws Rafael Fiziev. Fiziev, who lost his UFC debut to Magomed Mustafaev by knockout in just 89 seconds, has wins over Alex White and Marc Diakiese since.

Moicano is the bigger fighter, but both of these guys should be very active in the smaller Octagon. Moicano has seven submission wins and zero KO wins. Fiziev has five KO wins and one submission victory. This is a contrast of styles here, as Fiziev wants to stay upright and Moicano would rather take the fight to the ground. These are two well-trained fighters and both should have quality gameplans here. To me, this fight is very close to call, which would make me default to Moicano at plus money, but I think this is the hardest handicap on the card.

Charles Oliveira was in the main event of the last UFC fight prior to the shutdown. He beat Kevin Lee by third-round submission to extend his winning streak to seven. Tony Ferguson last fought in the main event at UFC 249 and lost to Justin Gaethje by fifth-round knockout. It was an absolute war of a fight and you have to wonder how Ferguson looks in his return. Ferguson was neck-and-neck with Gaethje in that fight before the knockout.

That is a big reason why Ferguson is priced at -165 here. His last performance was very impressive, even in defeat. Oliveira may very well have been trailing Lee on the cards prior to geting the guillotine choke early in the third round. Ferguson at -165 seems a little bit on the cheap end here in all honesty. So, too, does that under 2.5 at -159. Oliveira has come in under that number in every one of his fights over the last six years.

This is a 21-day turnaround for champion Deiveson Figueiredo and challenger Brandon Moreno. Fortunately, the two fights each won in the first round back on November 21, which is a big reason why this fight was able to come together so quickly. Figueiredo won the title back on February 29 over Joseph Benavidez and then defended the title a few months later in July. He headlined UFC 255 with a title defense over Alex Perez. His opponent was originally supposed to be Cody Garbrandt.

Perez was supposed to face Brandon Royval. Instead, Royval got knocked out by Moreno with one second left in the first round. Moreno came out fast and aggressive and the unprepared Royval lost the fight and took a lot of abuse in under five minutes. These two may be in the flyweight division, but they throw very heavy strikes.

That will be an interesting development for Figueiredo if this fight goes long. The 32-year-old is a deceptively fast and powerful striker, but we haven’t seen his chin on display much. Both fighters have multiple paths to victory. The fact is that Figueiredo is just the better fighter.