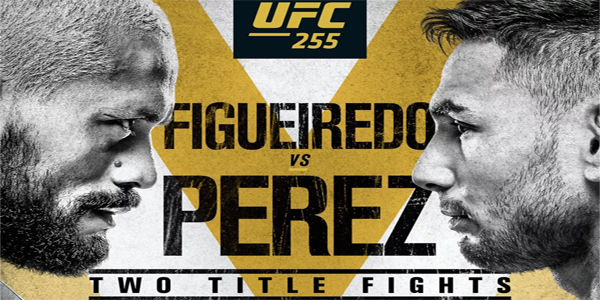 Twelve fights are on the UFC 255 card for Saturday November 21 and two of them will be title fights. The UFC Flyweight Championship will be on the line between heavily favored champ Deiveson Figueiredo and Alex Perez. The UFC Women’s Flyweight Championship will also be up for grabs with enormous favorite Valentina Shevchenko against Jennifer Maia.

It will be interesting to see if viewers are willing to pony up the pay-per-view price for what seems like two fairly uncompetitive title bouts, but that isn’t up for us to decide. What is up for us to decide is how to bet this UFC 255 card at the UFC APEX training facility in Las Vegas. This is the second-to-last PPV card of the year, but we are expected to have events up through December 19.

We’re writing this a bit earlier than usual, so a lot can happen, particularly on the COVID front between now and Saturday, so keep that in mind as we peruse the odds from BetOnline Sportsbook for UFC 255.

UFC debutant Sasha Palatnikov is making the leap from ADW to take on Louis Cosce, who earned himself a contract with his Dana White Contender Series appearance back in August. The undefeated 25-year-old is a big favorite here against Palatnikov as a fighter that most MMA bettors have seen and seem to respect with seven stoppage wins, all in the first round. It was supposed to be a huge night for the Cosce family, as Louis’s brother, Orion, was also on the card, but was forced to withdraw. Either way, Louis should make the family very proud with a win here.

Dustin Stoltzfus brings a 13-1 record into the Octagon for this fight at 185 pounds against Kyle Daukaus. Stoltzfus was another Dana White Contender Series find in August and he impressed with a first-round knockout of Joe Pyfer. It was just the second KO of his career. Unfortunately, he draws a fighter with more pedigree in Daukaus, who did suffer his first career loss when he went down by decision to Brendan Allen back in June. Daukaus was the CFFC champ before making the move to UFC. Daukaus and Cosce should make for a good parlay to open the card.

Veteran Alan Jouban will try to get back in the win column against promotional newcomer Jared Gooden. The 38-year-old Jouban has lost three of his last four fights and will be shaking off over 19 months of cage rust here. Gooden was mostly recently in Titan FC and even had a title shot against Michael Graves last year in the welterweight division. The 26-year-old Gooden already has 21 fights to his name with 17 wins, 13 by stoppage. Jouban is the more experienced, more accomplished fighter at the upper levels, but this has been a long layoff and he’s only fought once since February 2018. The short underdog looks good here.

Nicolas Dalby’s return to the UFC has had mixed results. He beat Alex Oliveira in his first fight back last September, but then lost in July to Jesse Ronson by first-round submission. It was the first time that the 36-year-old had ever lost by stoppage. Could this be the second? Dalby was originally slated to face Orion Cosce, but Daniel Rodriguez will slot in on short notice as a very big favorite. Rodriguez is 3-0 this year and 4-0 in the UFC if we include his Contender Series match last year. The price seems lofty on Rodriguez here, but he did have a full camp because he was supposed to fight Bryan Barberena last weekend. This is a stay away fight for me.

While we won’t see both Cosce brothers, we will see the Shevchenko sisters. Antonina Shevchenko is a -175 favorite for her flyweight fight against Ariane Lipski. Antonina, the older of the sisters, has lost two of three to Katlyn Chookagian and Roxanne Modafferi. She is getting a little bit of a respite here, but the line certainly implies that the 26-year-old Lipski has a chance. The former KSW champ had a rather inauspicious start to her UFC career with losses to Joanne Calderwood and Molly McCann, but she’s won a couple in a row now to get back on track. This one seems pretty close to call, but Shevchenko is a little bigger in the smaller UFC APEX Octagon and that could be the difference.

Joaquin Buckley has the knockout of the year from his fight against Impa Kasanganay with a nasty spinning back kick that went viral around the world. Buckley was winning the fight against Kasanganay at the time, but it was hardly a beatdown. Is he overpriced here against Jordan Wright in this middleweight matchup as a result? The undefeated Wright is 11-0 with 11 stoppage wins, including a debut win over Ike Villanueva back in August. His Contender Series appearance was deemed a No Contest against Anthony Hernandez and it was 18 months before we saw Wright again. This line is too high. Wright is the taller fighter and the more versatile fighter with a better grappling and ground game than Buckley. I like the upset here.

Brandon Moreno was originally set to face Alex Perez, but with Perez now getting a title shot since Cody Garbrandt suffered a torn bicep in training, Moreno now draws Brandon Royval. This was a change that was announced a long time ago and you have to wonder if Moreno feels slighted that he isn’t the one in the spotlight in the main event. These are two guys with sound ground games and some pretty good results of late. Royval was the LFA champ and a multiple main event fighter before jumping to UFC. Moreno, though, has several more UFC data points. This has Fight of the Night potential with two fast, technically-sound fighters. Moreno is probably just a better version of Royval, so he gets the nod.

GET A WELCOME BONUS WHEN YOU DEPOSIT AT BETONLINE SPORTSBOOK

Mauricio “Shogun” Rua may be 38, but unlike some of his colleagues, he’s still getting the job done as he gets up in years. Shogun is 3-1-1 in his last five fights, including a split decision win over Rogerio Nogueira back in July. This is a rematch of the war between Rua and Paul Craig back on November 16, 2019 in Brazil. The two fought to a draw. Rua was the -280 favorite in that one. Now we see Craig the clear favorite.

Not that much has changed, as both fighters won on July 25 in their respective bouts. Maybe some believe that Brazilian judging gave Shogun a draw he didn’t deserve. It seems like a big overreaction, but it is hard to take a fighter -170 that was +240 about a year ago. Craig is the pick because we pick every fight here, but I wouldn’t bet this one.

We don’t see huge underdog roles like this often for Katlyn Chookagian, but the 31-year-old looked bad in October against Jessica Andrade. Coming back with such a fast turnaround after getting knocked out could be a tough spot for the former top contender in the flyweight division. This will be her fourth fight of 2020 and she’s taken some abuse throughout the year.

Cynthia Calvillo is undefeated in her last four fights and 9-1-1 in her career overall. She went 25 minutes with Jessica Eye back on June 13 and won pretty handily with a mix of takedowns and accurate striking. Chookagian’s antics in the Octagon shouldn’t faze the 33-year-old. This price probably looks a little bit big, especially with the likelihood of a decision, but Calvillo has the better wrestling game and is just as aggressive in the striking department. It’s a bad matchup for Chookagian.

This feels like a really straightforward handicap. Tim Means has had a decent UFC career, but the song remains the same. When he steps up in class, he loses. When he fights inferior competition, he wins. You could make a case that his win over Thiago Alves bucks that trend to a degree, but Alves is clearly on the wrong side of the aging curve.

The part that isn’t straightforward is the talent level of Mike Perry. Perry came to the UFC with big dreams and a big prospect status, but all six of his losses have been in the UFC against just seven wins. He’s basically a .500 fighter. His opponents have run the gamut of good to bad and everything in between. I’m not sure either fighter is worth your money here. Perry has lost five of his last eight and Means is 4-5 over his last nine. Sometimes you get fights in which neither guy is trustworthy. Perry has only been stopped twice in his career and has had a lot of decisions of late. Maybe the over is the look here, especially at a plus price.

No offense to Jennifer Maia, who scored an impressive first-round submission win over Joanne Calderwood to earn this title shot, but there is nobody in this division on the same wavelength as Valentina Shevchenko. At least not yet anyway. The 32-year-old Maia won that fight back in August, but she lost to Katlyn Chookagian prior to that at UFC 244 and it wasn’t even really that close. The only question here is whether or not Shevchenko wins by stoppage or decision. She will defend her title for the fourth time.

The Flyweight strap is up for grabs here at 125 pounds between Alex Perez and Deiveson Figueiredo. Perez was originally set to face Brandon Royval and not even be on the main card, but now he gets a title shot because Cody Garbrandt got hurt. Since May 19, 2016, Perez only has one loss and it came to Joseph Benavidez, who has had five title shots and has never won any of them.

In fact, Deiveson Figueiredo’s title win and lone defense were against Benavidez. He won the first one by knockout and the second one by submission. The 32-year-old found a second gear after his March 23, 2019 loss to Jussier Formiga and has won four straight, including the last three by stoppage. Figueiredo has some of the best power in the division and a good ground game to boot. Perez is a quality fighter, but this is above his pay grade so to speak.

I think we’re looking at a pretty weak main card here for a pay-per-view event and that includes two favorite wins in the title fights.

GET A 100% WELCOME BONUS FROM BETONLINE SPORTSBOOK