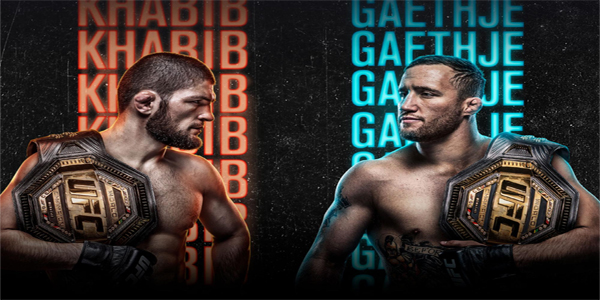 We have waited a long time for Khabib Nurmagomedov’s return to the UFC. The wait ends on Saturday. The undefeated champ takes on Justin Gaethje in the main event of UFC 254. You’ll need a pay-per-view purchase to view the main event and the main card is expected to start around 10 p.m. ET.

That is the culmination of a strong card of 12 total fights put together by Dana White and the UFC matchmakers for this Fight Island event. The middleweight fight between Robert Whittaker and Jared Cannonier will be a great lead-in to the main event of the evening.

We’ll break it all down with thoughts on all of the matchups and pay special attention to the six fights that make up the main card on PPV. Odds are from BetOnline Sportsbook.

Action begins at 155 pounds in the lightweight division between Joel Alvarez and Alexander Yakovlev. Alvarez has been bet into the -155 favorite with a +135 price tag on the underdog Yakovlev. Alvarez is 17-2 in his career. He lost his UFC debut to Damir Ismagulov, but responded with stoppage wins over Danilo Belluardo and Joe Duffy, with his most recent win back on July 18 by first-round sub. That was the 15th submission win of Alvarez’s career. Yakovlev hasn’t fought since November 9, so he’ll be shaking off some cage rust here as he’s lost three of his last four fights. The money on Alvarez makes sense. Alvarez by sub or Alvarez inside the distance will cut down on the juice.

Liana Jojua is a huge +350 underdog in the first of two women’s fights on the card. She’ll face Miranda Maverick, who is making the leap from Invicta to UFC. She is 9-2 in her career, but has ripped off five straight wins, including a revenge victory over DeAnna Bennett. Maverick hasn’t fought since February 7, which is an extremely long layoff for the 23-year-old. Jojua, a former FNG champ, is 1-1 in the UFC at just 25. Honestly, as hyped as Maverick is, the +350 might not be a bad gamble.

We’ve got a light heavyweight scrap here between Smilin’ Sam Alvey and Da Un Jung at 205 pounds. Jung is a -335 favorite, which may seem like a big line given the name value of Alvey, but he’s lost four straight fights, with his most recent defeat at UFC 249 against Ryan Spann. Jung is 13-2 and 2-0 in his UFC career. This is a chance for the 26-year-old Jung to beat a name opponent and a veteran to springboard into a bigger fight, probably on the main card of a Fight Night event. We’ve seen UFC set these up a lot and they usually go as expected. Jung is chalky at the -335 price tag, but we can find parlay pieces to pair with him.

Let’s see how Shavkat Rakhmonov does on the big stage. The undefeated 25-year-old from Kazakhstan draws a wily UFC veteran in Alex Oliveira in his debut fight. Rakhmonov is 12-0 across M-1 and KZMMAF primarily. He hasn’t fought since June 28, 2019, so he’ll have to shake off a lot of cage rust in the biggest opportunity of his young career. Oliveira lost three straight fights from December 8, 2018 to September 28, 2019, but the 32-year-old is 2-0 in 2020. Oliveira is a -125 favorite here against Rakhmonov, who is stepping up in class, but all 12 fights have ended in a stoppage. Each of the last four for Oliveira has gone to the cards. With that total at 2.5 and juiced to -150, the implication here is Oliveira by decision. The betting market is surely pointing that way. If you disagree, then Rakhmonov by stoppage is the way to look.

Casey Kenney has taken just about all of the money for his fight against Nathaniel Wood at 140 pounds. Wood is 1-1 in 2020 and had won his previous three fights, but Kenney has been bet up to a -180 favorite here. Stylistically, Kenney is a tough matchup for Wood. He has never been finished and only has two decision losses. Fourteen of Wood’s 17 wins are by stoppage. Kenney is coming back ultra quick after his win over Alateng Heili on October 3, but he was barely hit in that fight. Perhaps some recency bias is playing into this line and the betting action. At this point, it’s fair to say that Wood at +155 probably has some value, but it is hard to go against the money. This will also be a catchweight bout with the quick turnaround for Kenney.

The first of two heavyweight fights will lead us into the main card, as Stefan Struve takes on Tai Tuivasa. Struve has an enormous height advantage, as he does in most of his fights, standing nine inches taller than his opponent. The height edge hasn’t helped Struve much, as he has lost four of his last five fights. Tuivasa has lost three straight. To be honest, neither fighter is worth your money here.

Ion Cutelaba and Magomed Ankalaev fought on February 29, 2020. Cutelaba lost via knockout, but it was a very controversial outcome. Cutelaba was “knocked out”, but many believed it was an early stoppage, including his opponent. Since then, this fight has been scheduled and canceled twice, both times because of COVID-19. Ankalaev couldn’t travel once and Cutelaba had the dastardly illness once.

So here we are at UFC 254. Cutelaba is a big underdog again. Ankalaev hasn’t fought the quality of competition that Cutelaba has, but he’s the 13-1 fighter that would be 14-0 if he hadn’t tapped out with one second left against Paul Craig in his UFC debut. Cutelaba is 3-2 over his last five fights, with the controversial Ankalaev loss and a loss to veteran Glover Teixeira. This line is probably a little bit high, all things considered. With the first-round knockout potential of these two guys, though, under 1.5 is the play for me.

Cynthia Calvillo was forced out of this fight from a positive COVID-19 test and now Liliya Shakirova will make her UFC debut. This is a massive step up in class for the 29-year-old from Uzbekistan. She celebrated her 29th birthday on Wednesday in advance of the biggest moment of her career. She is 8-1 with four stoppage wins in much smaller promotions like GFC and Samara MMA. It’s been a while since she was in FNG.

The 37-year-old Lauren Murphy was once upon a time the champion in Invicta. While those days are long gone, she has won each of her last three fights and is 2-0 here in 2020. Murphy should win this fight going away. If you want to cut into the juice, she’s a good parlay piece with Da Un Jung.

This is a curious choice to put on the main card of a pay-per-view event. The choice was made because of Phil Hawes. The 31-year-old made an impact on the Dana White Contender Series on September 8 and got rewarded with an opportunity on this card. Jacob Malkoun hasn’t fought since October 4. The 25-year-old Australian is 4-0 in his career, but he has not fought anybody of consequence.

This is because White likes Hawes and because of that, it’s -240 here. He wants to give the young man a spotlight and this is that spotlight.

Walt Harris suffered a setback last time out against Alistair Overeem. It was the first loss for Harris since a DQ defeat against Mark Godbeer back in 2017. He was 4-0 in his previous four fights, though his win over Andrei Arlovski was wiped from the record for a positive test for a banned substance. Harris’s loss to Overeem was a bit of a surprise, but he took that fight on extremely short notice when Philippe Lins had to withdraw.

Alexander Volkov has lost two of his last three fights spread over two years. Volkov last fought on June 20 and went all five rounds with Curtis Blaydes in the main event of that Fight Night card on June 20. Blaydes wrestled his way to a win. Harris isn’t much of a grappler or a wrestler. The 37-year-old is more of a striker. We’ll have to see how Volkov handles that with a much different opponent. He faced a similar fighter in Derrick Lewis and lost back in 2018. I’ll take a look at the underdog here, given that a few shots could end it.

Robert Whittaker and Jared Cannonier has Fight of the Night potential. Everybody is rightly excited about Khabib’s return to the Octagon, but this is an extremely even fight, as the line implies. The light switched on for Whittaker back in 2014. Since then, his only loss came in the title fight at UFC 243 against Israel Adesanya, who could very well be the best middleweight champion of all-time when all is said and done. You can’t hold that one against him to say the least.

And, yet, here we are with Whittaker now the slight dog against Cannonier. The 36-year-old Cannonier has won three straight by knockout, but he hasn’t fought since September 28 of last year. This will be a very technical fight. These two guys have diverse skill sets and love to use leg kicks to their advantage. Late money has been on Cannonier, but Whittaker is the younger, sharper fighter having just gone 25 minutes with Darren Till in July. Respect to the late money, but it’s Whittaker for me.

Gaethje’s five-round war with Tony Ferguson was a huge performance from him. He got a gift win to add speed to the hype train over Donald Cerrone on September 14, 2019. It was important for him to get in there and beat a fighter still close to his prime. But, as the line suggests, this is a huge step up for Gaethje. This is a fighter unquestionably in his prime years, though Khabib has not fought in a long time. Long layoffs are nothing new for him, though. Khabib went more than 13 months between fights against Michael Johnson and Edson Barboza and then went 11 months between Conor McGregor and Dustin Poirier.

Khabib is 32 years old. He’s technically sound and savvy. His ground game is unlike anything that Gaethje has seen. Gaethje’s only path to victory here is a knockout. Khabib has never been knocked out.

GET A WELCOME BONUS TO BET UFC 254 AT BETONLINE SPORTSBOOK!