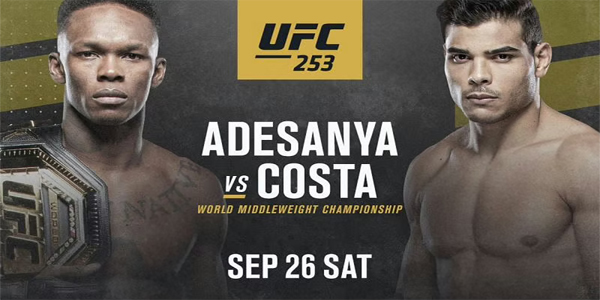 Dana White has taken the UFC overseas once again. The top MMA promotion in the world is back on Fight Island in Abu Dhabi for UFC 253. The middleweight championship will be on the line in the main event between Israel Adesanya and Paulo Costa, but the vacant light heavyweight title will also be awarded between Dominick Reyes and Jan Blachowicz.

Two title fights highlight 11 bouts scheduled for this card, which will be on ESPN+ PPV for the final five fights of the night. ESPN2 will carry all of the prelim matches.

After a dud of a card last week, White and UFC officials are really hoping that this one fits the bill and it sure looks like it will. We’ll handicap the action with odds from BetOnline Sportsbook and pay some extra attention to the main card fights.

Action starts at 2:30 a.m. Gulf Standard Time in order to give the U.S. East Coast some proper viewing hours. Once again, there will be no fans in attendance, so the starting time of the fight is irrelevant to say the least.

The first fight features Khadis Ibragimov and Danilo Marques. Ibragimov is the -150 favorite with a total of 2.5 juiced to -135 on the under. These are two big light heavyweights, as Ibragimov checks in at 6-foot-3 and Marques is 6-foot-6. This is the debut for Marques, who is 9-2 with eight stoppage wins. He has not fought since February 18, 2018 and is getting his first UFC appearance at age 34. Ibragimov brought a perfect record to UFC, but he is 0-3 in his three UFC fights. The 25-year-old should win here, but it is hard to take anything for granted. This is a step down in class at least.

Juan Espino is a big favorite for this heavyweight fight against Jeff Hughes. Espino is -285 and this one could reach the third round with the over 1.5 juiced at -150. Espino, who was the TUF 28 Champion is now 39. He has quite a bit of size and reach on Hughes, who has not had much UFC success. He was a Dana White Contender Series debutant after beating Maurice Greene in LFA for the title, but has not won a fight since. Espino’s price is probably a little too high, but Hughes doesn’t inspire a lot of confidence.

We should have a much better fight here between William Knight and Aleksa Camur. Camur brings a perfect 6-0 record to the cage here to take on the 8-1 Knight at 205 pounds. Knight appeared twice on the Dana White Contender Series and will get his shot just 25 days after his last appearance. The 32-year-old only has one loss to his name with eight stoppage wins. Camur is a 24-year-old Serbian with a 6-0 record that includes a win over Justin Ledet. Camur is -170 with +145 on the return for Knight. This one is pretty evenly juiced on 1.5 rounds. Camur had his first decision outcome against Ledet. This one won’t go that far, but it did show some cracks in the armor with a big step up in class. I like the underdog in Knight here.

Shane Young will take on a UFC debutant in Ludovit Klein at 145 pounds in this one. Young was slated to face Nate Landwehr, but Landwehr tested positive for COVID-19 and was yanked from the card. Klein makes history here as the first fighter from Slovakia to enter the UFC Octagon. At just 25 years of age, Klein already has 18 fights to his name and is 18-2. This is clearly a huge step up in class for him, as Young is 2-1 in his UFC career, but Young has not fought since February 9, 2019. Klein has three fights since then. The odds have this fight listed as a -110 toss-up and Klein would certainly make for a great story with a win. Young is a much more accomplished fighter and his loss came against Alexander Volkanovski in his UFC debut. You have to give him the nod here.

The UFC really wants Jake Matthews to be a success. Matthews debuted in the UFC back in 2014 at the age of 19. He won that fight and his losses haven’t been terrible, dropping fights against James Vick, Kevin Lee, Andrew Holbrook, and Anthony Rocco Martin. Based on the odds, he should not lose to Diego Sanchez here. Matthews is -700 to score the victory. The best bet here is probably over 2.5 at -160, as neither fighter possesses a whole lot of stoppage power.

To finish out the prelim card, Brad Riddell is more than a $3 favorite against Alex Da Silva. Riddell is 2-0 in the UFC and 8-1 overall. Both of his fights in the UFC have gone the full 15. Da Silva is 1-1 in his two UFC fights. He hasn’t fought since August 10 of last year and went the distance with Kazula Vargas in that win. Vargas is a fringy UFC talent, as this line suggests. Riddell should win, but, again, the better value appears to be on over 2.5 at -115.

GET A WELCOME BONUS AND BET ON UFC 253 AT BETONLINE

Main card action begins in the featherweight division. Hakeem Dawodu will shake off nearly 11 months of cage rust to take on Zubaira Tukhugov. Dawodu is 11-1 in his career and has rattled off four straight wins since his UFC debut loss to Danny Henry. That remains the only time Dawodu has fallen short of the third round in his UFC career. He’s got three decision wins and one knockout of Yoshinori Horie. Suffice it to say that Tukhugov is an upgrade to that opponent.

Tukhugov went three years and nearly four months before returning in September 2019 to fight to a draw with Lerone Murphy at UFC 242. Murphy landed a lot more strikes, but Tukhugov controlled the fight on the ground with several successful takedowns. Dawodu is more of a striker, so we have a contrast in styles here. As the longer, lankier fighter, Dawodu should be able to keep the fight upright. If he can, he will win. If he can’t, he will lose. This fight is great for live betting, but we’ll give Dawodu the nod.

The only women’s fight on the card features a big size advantage in the matchup between Ketlen Vieira and Sijara Eubanks. Vieira stands four inches taller than her opponent in this fight. Eubanks was a late replacement about a week and a half before the fight was scheduled. Vieira was slated to fight Marion Reneau, but now she draws Eubanks, who does have wins over Julia Avila and Sarah Moras this year. She’s made some really positive changes following losses to Bethe Correia and Aspen Ladd.

The 29-year-old Vieira is coming off of her first career loss at UFC 245 to Irene Aldana. It was an action-packed first round of fighting and Aldana scored the knockout win. Vieira proved susceptible to leg kicks in that fight. Eubanks is not big on those, but has increased her output and her accuracy since her 2019 losses. We’ll still give Vieira the nod, but this price may come down a little before the fight, so I’d wait it out.

Former LFA championship Brandon Royval looked good in his UFC debut against Tim Elliott with a second-round submission victory. Let’s see what he has in store for Kai Kara-France. Kara-France is 4-1 in his last five fights, all of which have gone the full 15 minutes and have all been against UFC competition. Royval’s ground game could present some problems for France. He generally has to control fights to win by decision. Royval’s takedown game and top control skills don’t jive with that path to victory.

Kara-France doesn’t have a knockout since he was in WLF and has one finish and it came in a cross-country promotional event back in 2018. Royval showed his ground skills against a solid fighter with a long UFC history in Elliott. The underdog isn’t a bad bet here in this one. The paths to victory for Kara-France are limited.

Dominick Reyes has been one of the best light heavyweights in UFC history and maybe the best to have never had the title. He’ll have that chance as a big favorite here against Jan Blachowicz. Reyes lost to Jon Jones and took a beating over 25 minutes back in February before everything shut down. With Jones showing a desire to move up to heavyweight, the light heavyweight strap is vacant and now the ball is in Reyes’s court to run with.

Blachowicz, a former KSW champ, lost four of his first five UFC fights. Hee’s 6-1 since then, including a dominant win over Corey Anderson back in February. It was a big win for Blachowicz to show that he could beat a fighter in his prime instead of an aging fighter on his way down the proverbial hill like Jacare Souza, Luke Rockhold, and Thiago Santos.

The problem here is that the 30-year-old Reyes is fresh and in the middle of his strong career as well. The heavy line is pretty fair and accurate here. The favorite should win.

For the second time in UFC history, undefeated fighters in the men’s division will meet for a title. The last time was Rashad Evans vs. Lyoto Machida at UFC 98. We’re on UFC 253 now.

Israel Adesanya will look to defend his strap against challenger Paulo Costa. Adesanya won the strap at UFC 236 and has two title defenses since. Costa hasn’t fought since August 17, 2019. That was when he fought to his first decision ever against Yoel Romero. Prior to that, Costa had 12 stoppage wins and all but one of them was a knockout. His KO power is something that Adesanya has not seen much of and will have to avoid for a long time.

Adesanya can finish opponents, but three of his last four wins have been by decision. He is taller and longer than Costa and that could allow him to avoid the big shots from his opponent. Adesanya will also be the fastest fighter that Costa has seen and you can’t hit what you can’t see. Adesanya has 14 knockouts of his own.

Ultimately, the line is probably a touch high on Adesanya here given Costa’s finishing ability, but the challenger should retain his title.