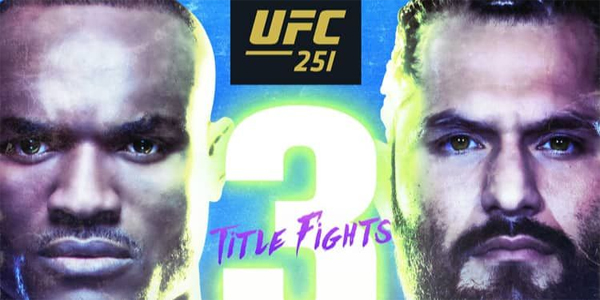 The hope was that UFC 251 would go off without a hitch. That hope is gone, but the new hope is that there are no more problems as we await the pay-per-view card on Fight Island.

Gilbert Burns had to be removed from the main event and his title shot against Kamaru Usman because of a positive coronavirus test. Some tense days now follow in the lead-up to the next card on Yas Island, but all we can do is handicap the card and hope for the best.

This week, we’ll grab our odds from BetOnline Sportsbook for UFC 251, including the three main card title fights with Usman vs. Jorge Masvidal, Alexander Volkanovski vs. Max Holloway, and Petr Yan vs. Jose Aldo.

In total, 13 fights are on the card. Action starts in the bantamweight division with Davey Grant and Martin Day. Day is actually a -175 favorite here in just his second UFC fight. The total is juiced to -220 on the over 2.5. Day lost last time out to Liu Pingyuan in a fight that happened all the way back on November 24, 2018. Grant ended a 16-month layoff by beating Grigorii Popov last November. There are better betting options on the board than this crapshoot.

Three women’s fights are on the card, with the first in the bantamweight division between Karol Rosa and Vanessa Melo. Rosa is a big -210 favorite with a total juiced to -300 on over 2.5. This is the second UFC fight for Rosa, who beat Lara Procopio back on August 31. Melo is seeking her first UFC win. She is 0-2 with losses to Irene Aldana and Tracy Cortez. This looks like another dud on the undercard in a lot of ways. The 25-year-old Rosa is more of a prospect than the 32-year-old Melo, so it does make sense for her to be a clear favorite.

The third and final fight of the “early” prelim card will feature flyweights Raulian Paiva and Zhalgas Zhumagulov. Paiva has a big size advantage and has been installed as a -182 favorite with another total that suggests the full 15 minutes juiced to -260. Paiva is 1-2 in UFC, but also won in his Dana White Contender Series fight back on August 11, 2018. He beat Mark De La Rosa back in February for his first official UFC win. Zhumagulov is making his UFC debut after being the Fight Nights Global champion. He’s gone 25 minutes many times over, so his endurance won’t be a question at all. At +157, he isn’t a bad upset candidate.

The lone heavyweight fight on the card features Marcin Tybura and UFC newcomer Maxim Grishin. Tybura was originally set to fight Alexander Romanov, but the veteran Grishin will step in. This will be the 40th fight of his career, but his first UFC fight. Tybura is a -118 favorite coming off of a win over Sergey Spivac back in February to snap a modest two-fight losing streak. Grishin hasn’t fought since Halloween when he fought to a 10-minute draw against Jordan Johnson, a fighter he beat just five months earlier. Again, there are better options on the card.

UFC newcomer Roman Bogatov will put his perfect record on the line in the lightweight division against Leonardo Santos. Bogatov is 10-0, including a stint as the M-1 champion, but he’s giving up a lot of size here to Santos. Bogatov stands just 5-foot-8 and Santos is six feet tall. He’s also much more experienced at this level. As a result, Santos is -178 to Bogatov’s +153. Santos ended a very long layoff last June with a knockout win, but hasn’t fought since.

Next up on the card are featherweights Makwan Amirkhani and Danny Henry. It seems to be a theme on this card that there are a lot of fighters that have not been in action in a while. Henry hasn’t been seen since he lost to Dan Ige way back in March. It was the first stoppage loss of his career and just his third overall. Amirkhani lost to Shane Burgos back in November, but there is no shame in that at all. Amirkhani is the -192 favorite here in our first fight of the night more likely to end in a stoppage than a decision per the odds. The under 2.5 is -125. Amirkhani does have a much more extensive UFC résumé, which is factoring into the price here.

Muslim Salikhov is a modest -127 favorite against Elizeu Zaleski dos Santos in what could be one of the most competitive fights of the card per the betting odds. Zaleski won on March 14, just before the pandemic shut UFC down, over Alexey Kunchenko for his eighth UFC win in nine fights. Salikhov is 3-1 in his UFC career. The 36-year-old is now 16-2 and has tapped out twice. Zaleski is not a submission artist. Hence the favorite role for Salikhov. The total is 2.5 and -115 both ways, but this feels like a fight in which one guy goes down swinging. This has some Fight of the Night potential, even with three title fights on the card.

Volkan Oezdemir seems like a good fighter to showcase in the lead-in to the main card. Oezdemir is -170 for his light heavyweight fight against Jiri Prochazka. This is the UFC debut for Prochazka, who just beat former UFC fighter CB Dolloway to regain his Rizin FF title. The 6-foot-4 Prochazka is only 27, but this will be his 31st professional fight. He has 22 career knockouts. Oezdemir has 12. This fight will have plenty of fireworks as well. Oezdemir is the known quantity coming off of a solid 2019 and he should win, but this will be a war.

WAGER ON UFC 251 AT BETONLINE SPORTSBOOK

Nothing against Paige VanZant, but odds like this are the reason why she should just focus on doing something else. Nothing against her as a fighter with an 8-4 record in her career, but she is looking for something else to do after this fight and may even try a different MMA promotion. VanZant did beat Rachael Ostovich last time out, but she had lost three of her previous four fights and has not fought very often. VanZant just has a lot of other business opportunities that she can pursue.

The hard part for Amanda Ribas here is staying focused. She is 9-1 in her career and her only loss came back in November 2015 to Polyana Viana when the two were in Jungle Fight. She’s a legitimate contender here in the flyweight division. If VanZant happens to catch her napping, this fight could go differently, but Ribas is easily the better fighter, as the line suggests.

The real question here is the total and whether or not VanZant can avoid getting finished. That seems a little unlikely, given how talented Ribas is and how much VanZant is focused on her future.

This is easily the best women’s fight of the night. Former strawweight champion Jessica Andrade, who won the strap at UFC 237 over Rose Namajunas, is an underdog in the rematch. Namajunas has not fought since May 11, 2019. Her return was supposed to come on April 18 at UFC 249, but she pulled out of the event after a couple of relatives died from coronavirus.

This is a tough handicap. Namajunas lost the first fight, but seemed to be the better fighter throughout the first seven minutes. On the other hand, Andrade did take Namajunas down a couple of times. This feels closer to a toss-up than what the odds would suggest. It has been a long layoff for Namajunas, whose desire to fight was taken into question last year.

This is not new territory for Jose Aldo. The 33-year-old went from November 18, 2009 to December 2, 2017 with a title on the line in each one of his fights. For most of those, he was the champion. Those were for the featherweight belt. Now he’s fighting for the bantamweight strap. He lost to Marlon Moraes at UFC 245 in his first fight at bantamweight. Now that Henry Cejudo has retired, the belt sits vacant and he gets a title shot, despite not being accomplished at that weight class.

Petr Yan lost to Magomed Magomedov back on March 26, 2016 by split decision. In 15 career fights, that is his only loss. He only has seven stoppage wins, but three have come via knockout since he joined UFC in 2018. Now he is a -220 favorite for this fight against Aldo. The 27-year-old wanted a title shot against Cejudo, but he will instead get it here against Aldo.

Yan has fought a lot more at this weight. He also has fought a much weaker slate of opponents throughout his career. Still, Yan is a heavy favorite here for a reason and it looks like he will be the next champion.

This is the rematch between Max Holloway and Alexander Volkanovski. The two fought at UFC 245 and Volkanovski was the unanimous decision winner. He improved to 21-1 with that win. The fight was mostly upright through, as Volkanovski attacked the legs of Holloway and kept his opponent from being able to be mobile around the Octagon.

We’ll see which sorts of adjustments Holloway can make in the rematch. Holloway is five inches taller than Volkanovski, which is why the challenger tried to take out Holloway’s legs. It kept the taller fighter from getting inside to attack at closer distances. It wasn’t like Volkanovski dominated the fight. Oddly, two judges saw it 48-47 and one saw it 50-45, but Holloway landed more head and body shots.

Holloway was actually the favorite and a pretty clear one at that for the first fight. This line looks to be too high with that in mind. Adjustments can be made and should be made here.

With a recent change to the fight card, BetOnline had not put up any total odds at time of writing. It will be Jorge Masvidal that steps in to fight Kamaru Usman and there are a lot of questions about how Masvidal will do this on short notice. This will be the first official UFC title shot for Masvidal. He’s won three in a row, including his win over Nate Diaz back at UFC 244.

Usman was very complimentary of Masvidal, who is 35-13 in his career. Usman is only 16-1, but the 33-year-old’s fight IQ is off the charts and it didn’t take him long to get into a position to beat Tyron Woodley for the title at UFC 235. He defended with a knockout win over Colby Covington at UFC 245. Usman is an elite grappler. Masvidal is more of a striker. He’s also a different type of fighter from Gilbert Burns. Usman was preparing for Burns. Masvidal was just hoping for a chance.

This should be a great fight, but ultimately, Usman is so good at what he does and Masvidal hasn’t fought many grapplers like this. He’s also struggled against some of those guys that are close to Usman’s level. The champion should retain his title, but it won’t be easy. Masvidal will have to win early because the longer this goes, the more it benefits Usman, who has gone into the fifth round in each of his last four fights. 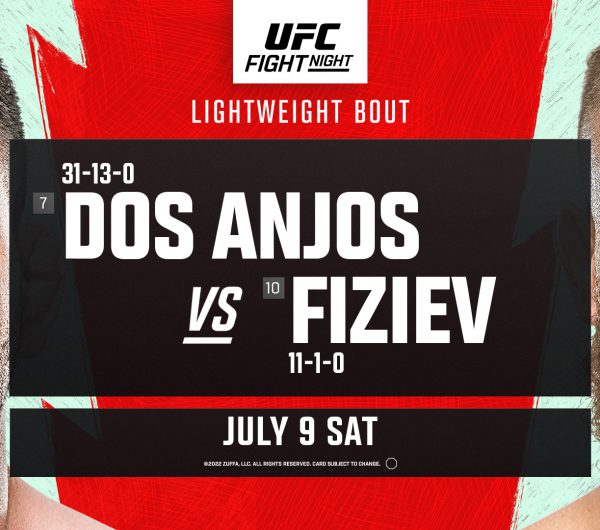