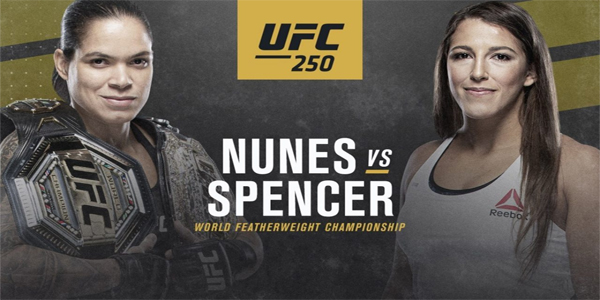 UFC 250 is upon us. Everything has been going smoothly for the UFC thus far, aside from Jacare’s positive test prior to the first event back. Let’s see how this one goes with the women’s featherweight title on the line and a total of 12 matches, highlighted by the Amanda Nunes vs. Felicia Spencer fight.

Like most UFC ### events, this one will end on pay-per-view and the show will begin on UFC Fight Pass/ESPN+. The middle four fights can be seen on ESPN. The UFC APEX will once again be the site for this one and remember that the actual Octagon is smaller, so that will favor the bolder, more aggressive fighters.

We’ll switch it up this week and pull the odds from Bookmaker Sportsbook, but be sure to shop around for the best prices on the fights that interest you. That might be 5Dimes. It might be BetOnline. It might be Bovada. It might be BetDSI. Check out our sportsbook reviews and then see which one works best for you.

Evan Dunham and Herbert Burns will get the card started with a catchweight fight at 150 pounds. No total was listed at time of writing, but Burns was installed as a -225 favorite. Dunham hasn’t fought since September 22, 2018 and suffered his second straight knockout loss in that fight. Burns is a newcomer to UFC with a win over Nate Landwehr and an impressive performance on the Dana White Contender Series. This would seem like a step down for Dunham, given that he’s fought guys like Francisco Trinaldo, Olivier Aubin-Mercier, Beneil Dariush, and Joe Lauzon, but this is a long layoff.

Devin Clark is +176 and Alonzo Menifield is -225 with what is expected to be a fairly quick fight between two active fighters. The total is 1.5 with -115 both ways, which would seem to imply that Menifield is in a good spot here. Clark’s last three wins have all come via decision, but his two losses have been via stoppage. Menifield is 9-0 in his career and 2-0 in the UFC. He’s 3-0 if we include his knockout eight seconds into his fight with Dashawn Boatright on the Dana White Contender Series. Menifield is already 32, but he has not gone further than 32 seconds into the second round yet in his career. He’s the winner by stoppage here.

Jussier Formiga is +105 with Alex Perez at -135 in the flyweight division in the last fight of the UFC Fight Pass portion of the show. Perez has won four of his last five, while Formiga has dropped two in a row to Brandon Moreno and Joseph Benavidez. Perez also has a loss to Benavidez in his recent history. The best bet here would be the over 2.5, but -228 is a big number to say the least. Some recency bias has this line where it is, but Perez is the more aggressive fighter and that should help him here with the smaller cage, especially as the aggressor if the judges are required.

The show moves to ESPN, but stays on ESPN+ as well with Charles Byrd against Maki Pitolo. Byrd is -200 with Pitolo priced at +158 and a total of over 1.5 juiced at -182. Byrd has dropped his last two fights, both by knockout, which is concerning given that he just recently stepped up in class to the UFC. This is Pitolo’s third UFC fight if we include a Dana White Contender Series appearance. The 29-year-old lost by unanimous decision in an exciting scrap against Callan Potter. If Byrd gets this fight to the ground, it will be very hard for Pitolo to win. That seems like the expectation based on the 1.5 and the big favorite role for Byrd. Cut into the juice with Byrd by submission.

UFC vets Cody Stamann and Brian Kelleher meet at 145 pounds in the featherweight division. Stamann is a big -290 favorite here with over 2.5 juiced at -237. Kelleher just fought last month and scored a nice KO win as an underdog over Hunter Azure. Perhaps the off year in 2019 helped Kelleher, who has two stoppage wins in 2020 already. Stamann is a huge step up in class, hence the line, but Kelleher seems to have found something that works for him. Stamann is more of a decision machine and not a big striker, so Kelleher could opt to be a little more aggressive. The underdog is not a bad gamble here.

Gerald Meerschaert is even money for his fight against Ian Heinisch at 185 pounds in what should be a terrific middleweight fight. Heinisch is -130, even though he is coming in off of two straight losses. He’s only lost three times in his career, but defeats at the hands of Derek Brunson and Omari Akhmedov have hurt his record. Meerschaert has dropped three of his last five and his wins have come against inexperienced fighters like Trevin Giles and Deron Winn. Meerschaert has 30 career wins and a big of a size advantage here, but we’re getting a cheap price on Heinisch based on how 2019 ended for him. This fight would likely be more like -160 or -175 if it was June 2019. Heinisch it is.

Chase Hooper gets his second shot in the UFC after a dominant performance against David Teymur. He almost won by submission, but then won by KO in the first round anyway. Now he is a -176 favorite against Alex Cacares. Cacares has split his last four fights, including a win and a loss last year. He beat Steven Peterson and lost to Kron Gracie by first-round submission. Hooper does look like a rising star at 20. This is a fight for him to beat somebody with a name and some UFC experience. Enjoy these lower prices now because they probably won’t be around long.

Sean O’Malley returned from over two years away from UFC to score a knockout win over Jose Quinonez at UFC 248. He’ll put his 11-0 record on the line here against Eddie Wineland. Wineland is giving up some size in this fight, as O’Malley stands four inches taller and three inches longer. He’s also a much more significant striker with a better ground game.

All around, O’Malley is the better fighter, as the line implies. The only question here is how long it takes O’Malley to win. Wineland is 35 and a veteran of 38 career fights, so he has enough of a cage IQ to keep this fight going for a while. That’ll be the pick here at over 1.5 and -150.

It had been a long time between fights for Neil Magny. He went from his November 17, 2018 loss to Santiago Ponzinibbio to his March 7 win at UFC 248 over Li Jingliang in one of his most impressive performances in quite some time. Now he faces Anthony Rocco Martin in a fight that he should win. Martin has won four of his last five fights, but hasn’t beaten too many big names within the division.

The obvious worry for Magny is Martin’s ability to get the fight down and maintain top control, but Magny, despite a lack of submission wins, has effective takedown defense and is bursting with fight IQ. He also has quite a bit of size here as a longer, lankier fighter. That could very well be the difference in this one. If Magny hadn’t been on the shelf for over a year, this line would be even higher.

Perhaps the most interesting fight on the card, Cory Sandhagen and Aljamain Sterling also have one of the closest lines on the board. Sandhagen has only lost one in his MMA career. He lost to Jamall Emmers, who is now in the UFC, back when the two were in LFA. Otherwise, Sandhagen has been pretty much flawless. He did struggle a bit with decision wins over John Lineker and Raphael Assuncao last year, but he still got the job done.

The job looks to be tough here against Aljamain Sterling. Sterling seems to have figured things out with two wins in 2018 and two wins in 2019, including some nice efforts against Cody Stamann and Pedro Munhoz. This one will be about the show because it will likely go to the cards. Neither guy has a ton of knockout power and both guys have decent takedown defense. Sterling is quicker and more athletic, but Sandhagen is more active. I’ll take speed and athleticism here.

Raphael Assuncao will try to stop a losing streak when he squares off with Cody Garbrandt at 135 pounds. Assuncao went 0-for in 2019 with losses to Cory Sandhagen and Marlon Moraes. He wasn’t very competitive in either fight, as he lost via unanimous decision to Sandhagen and first-round submission to Moraes. That was a rematch against Moraes and he did not appear ready. He’ll have to be better here, as he’s giving up some size to Garbrandt.

Garbrandt will also have to be better. All three of his losses have come in his last three fights. He lost twice to TJ Dillashaw and then got knocked out by Pedro Munhoz at UFC 235 last March. Would it be an exaggeration to say that this is a must-win fight for Garbrandt? Probably not, in all honesty. We could also say the same for Assuncao, who once beat TJ Dillashaw. To me, the play here is the over 2.5. Assuncao is not a finisher. He’s got to a ton of decisions. Garbrandt won’t get knocked out and he’s never tapped out.

Women’s featherweight champion Amanda Nunes is a heavy favorite to defend her title in this matchup with Felicia Spencer. Nunes won the featherweight strap back on December 29, 2018 against Cris Cyborg and will now look to defend it. Spencer was the Invicta champion when she got the call to join UFC. She beat Megan Anderson and then lost to Cris Cyborg before a wiffle ball game against Zarah Fairn.

This is a major step up in class for Spencer, who is an aggressive and active striker, but she’s never seen a fighter like Nunes. Few women have, especially in this division. Nunes is a violent puncher and also has shown that she can go the distance in wins over Germaine de Randamie and Valentina Shevchenko.

There is a reason that Nunes holds two titles. She typically fights for the bantamweight one, but now it’s the featherweight one and she will retain it. She’s too good for Spencer or really anybody else right now.