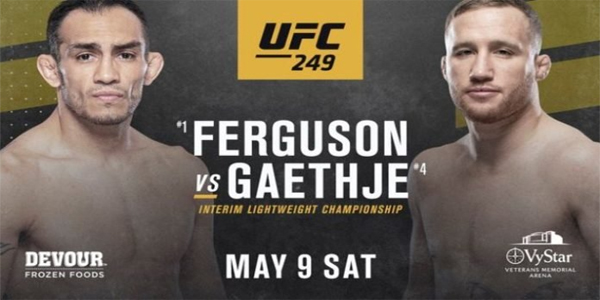 UFC 249 didn’t make it past some concerned Disney and ESPN executives on April 18, but it looks like all systems are a go for May 9 in Jacksonville, Florida. The VyStar Veterans Memorial Arena is set to be the venue for the event, but no fans will be in attendance with the continued bans on large gatherings.

Still, it will be a large enough gathering for this event with 12 fights on the card. Action will start on ESPN+, move to ESPN, and then finish up on pay-per-view with the last five fights of the night.

It just so happens that we did a lot of the legwork for most of these matches back in April when the first version of UFC 249 was supposed to take place. There are a few changes to this version of UFC 249, including the removal of Rose Namajunas vs. Jessica Andrade. Other that that, things look pretty similar overall.

With so many sportsbooks desperate for betting activity, just about everybody has lines up for this card well in advance, which is a rare treat. We’ll take out prices from 5Dimes.

Action begins on UFC Fight Pass with the first portion of the preliminary card. Ryan Spann is -410 with a total of 1.5 against Smilin’ Sam Alvey in the light heavyweight division. The total is slightly juiced to the over at -135. Spann has a noticeable size advantage here in height and reach and an outstanding ground game for a light heavyweight with 11 career submission wins, including one last time out against Devin Clark. Alvey, who is +330 for this fight, has dropped three straight, including two via knockout. He certainly faces long odds here, but he’s been around a long time and is a great name to have on a card like this.

Bryce Mitchell and Charles Rosa make up the first of two featherweight fights on the card. Mitchell is -160 with +140 on the comeback for the underdog Rosa. Mitchell brings a perfect 12-0 record into this fight, his first since December 7. He was the winner of TUF: Undefeated and then topped Bobby Moffett and Matt Sayles in 2019 to stay unblemished. He’ll get a good test here in the veteran Rosa and the judges are expected to be needed with the over 2.5 juiced at -220. Mitchell should hold up, but this is an important fight to see how he is progressing against top competition.

Niko Price is 2-2 over his last four fights heading into this matchup against Vicente Luque in the main event of the ESPN+ portion of the show. Each of the last five fights Price has ended in a knockout, with three on the good side and three on the bad side. His win over James Vick back on October 12 was a big one and felt like it could be a turning point for the 30-year-old. It was his biggest name win to date to say the least.

This is actually a rematch of the match back on October 28, 2017. Luque won that fight in the second round by submission. That was actually the first loss of Price’s career. Luque’s most recent fight snapped a six-fight winning streak with the decision loss to Stephen Thompson. There are a lot of little side plots to this fight, but the price on Price at +235 just seems a little bit too big to ignore, with Luque an overpriced favorite at -275.

Unfortunately, due to a positive test for COVID-19, Ronaldo “Jacare” Souza has been taken off the card and his fight with Uriah Hall will have to be rescheduled.

We lost Sijara Eubanks and Sarah Moras from the first version of the UFC 249 card, but we got an upgrade in Carla Esparza and Michelle Waterson. These two had been preparing for each other anyway, as they were slated for the UFC Fight Night 172 card. Now they fight on ESPN in this one. The over 2.5 is juiced at -515, so there isn’t much to do on that end. Esparza is -160 with a two-fight winning streak and Waterson is +140 coming off of a loss to Joanna Jedrzejczyk over 25 minutes back in October. She took some punishment in that fight, so we’ll see how she bounces back here. Per the odds, it might not be a good bounce back.

Aleksei Oleinik and Fabricio Werdum square off in the first of three heavyweight fights on the revamped UFC 249 card. Werdum is a big -310 favorite over Oleinik and the fight is lined at 1.5 rounds with -125 on the over. This fight was supposed to take place at UFC 250, but it moves up one event in name only, as it was set for May 9 anyway.

This is Werdum’s first fight since popping a positive test for a banned substance, so he’s dealing with almost a 26-month layoff. That is a lot for a 42-year-old fighter. Oleinik fought once in 2020 already and beat Maurice Greene by submission. It snapped a two-fight skid for Oleinik. Werdum may be deserving of a big price based on résumés, but he hasn’t been in the Octagon in a long time and is two years older now. I have to think Oleinik has a great shot at the balloon number here.

If you want viewers, put Donald Cerrone on the card. Fans will have to cheer from home for one of their favorites as Cowboy gets back in the cage against Anthony Pettis. This is the second of six fights for Cerrone on his current contract. He lost to Conor McGregor in what felt like a WWE-esque move to put McGregor over again. Pettis, once a top fighter in the lightweight division, has only won four times in his last 12 fights.

And, yet, Pettis is the -135 favorite. Is Dana White using Cerrone to put somebody over again? To help Pettis remain relevant for a little while? It sure feels that way, doesn’t it? These two crossed paths on January 26, 2013 and Pettis won via first-round TKO. Both guys have lost some shine, but Cerrone still has his in the public eye as a fan favorite. He’s the perfect guy to breathe new life into Pettis in what feels more like another PR stunt.

This will be a brawl. Yorgan De Castro is 6-0 with five knockout wins in his career, including his official UFC debut at UFC 243 against Justin Tafa. That was after a first-round knockout in the Dana White Contender Series over Alton Meeks. This is a bit of a step up for De Castro in that Hardy has had some UFC experience, but Hardy is not a polished product or a classically-trained UFC fighter.

Hardy lost last time out against Alexander Volkov, but it was a big step to see him go 15 minutes with one of the better heavyweights in the division. That is a good sign going forward. This fight doesn’t look like a marathon, though, and Hardy got tired in that third round and Volkov really took over the fight. That doesn’t seem to be a worry for Hardy here and that is his only legitimate loss. I’d look for a bounce back here, but, again, heavyweight fights scare me with favorites.

Jeremy Stephens gets a chance at some redemption and maybe a second wind to his career against Calvin Kattar. He took a beating against Yair Rodriguez back in October, but managed to last 15 minutes in the loss. He’s now dropped his last three fights and has not looked good in the process. This line, however, may be just a little too high.

Kattar, like Stephens, has a recent loss to Zabit Magomedsharipov on his ledger. Kattar doesn’t really have too many wins to write home about recently. First-round knockouts of Ricardo Lamas and Chris Fishgold are nice, but Lamas is 37 years old now and has lost three of his last four and that was Fishgold’s UFC debut after a full-year layoff. Stephens can turn back the clock here and the price is right to take a shot.

Francis Ngannou and Jairzinho Rozenstruik is a fight that a lot of people have been waiting for and now they get it. Ngannou is -270 with the under 1.5 at -115 for this heavyweight scrap between the top contender for the title and a rising prospect. These are two terrifying dudes and we’re going to see some big strikes thrown in this fight. Since losing to Derrick Lewis, Ngannou has three straight first-round knockouts in 142 seconds.

It took a while for Rozenstruik to knock out Alistair Overeem, but he did it in the championship rounds with four seconds to spare before the fight went to the judges. This is a dangerous fight for Ngannou against a very athletic, very strong puncher. The heavyweight division lacks quicks and athleticism these days, but these two guys have both.

The likelihood is that this fight is over quickly as the main event of the ESPN portion of the card, but maybe this thing is just a war of attrition with neither fighter backing down. In heavyweight fights that could end with one shot, I tend to defer to the underdog. Rozenstruik is stepping up in class, but he is very, very live at +230.

We lost Rose Namajunas vs. Jessica Andrade, but picked up another title fight in the process. Bantamweight champion Henry Cejudo is -225 against challenger Dominick Cruz in the lead-in to the main event. Cejudo relinquished the flyweight title to focus on the bantamweight strap and he’ll do that here against Cruz. Originally, Jose Aldo was slotted for Cruz’s spot, but he’s having visa issues.

It will be interesting to see how Cejudo does in another bantamweight fight. He knocked out Marlon Moraes at UFC 238, but this feels like something of a step up against the more accomplished Cruz. On the other hand, Cruz hasn’t fought since December 30, 2016. Cruz has battled through a ton of injuries. This would be a great story about perseverance and heart, but Cejudo is the clear-cut favorite for a reason.

This isn’t quite the fight that everybody wanted, but with Khabib Nurmagomedov stuck in Russia because of the quarantine, Justin Gaethje slots in for the fight against Tony Ferguson. This fight will tell us a lot about Gaethje. His most recent fight against Donald Cerrone felt more like a fight to “put him over”, to borrow an expression from the WWE. It was a fight to get Gaethje another win over a big name. It allowed Gaethje to sustain the momentum from wins over Edson Barboza and James Vick. Gaethje is an action junkie and a fan favorite because he’s going to kill or be killed and there is something endearing about betting on a guy like that. You know you’re getting a max effort every time out.

That should ring especially true here against Ferguson, given that some people believe he isn’t as worthy of this spot as others. Ferguson has reeled off 12 straight victories in a variety of different ways. He’s knocked guys out and forced stoppages. He’s gotten submissions, including his title win over Kevin Lee. He’s also had decision wins. That is why Ferguson is a favorite and the pick here. He can win a lot of different ways. Gaethje needs a knockout of a guy that has never been knocked out before.