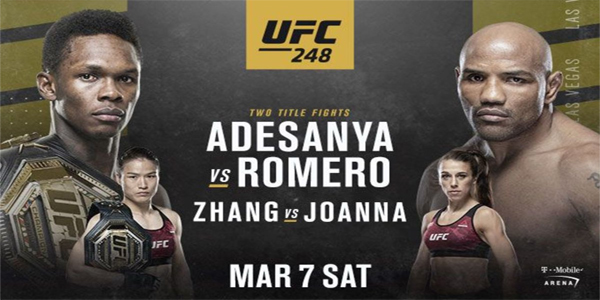 We’ve got a total of 12 fights on the card for UFC 248 in Las Vegas at T-Mobile Arena. Two of the fights are for titles, as Israel Adesanya will try to defend the middleweight strap against Yoel Romero and women’s strawweight champ Zhang Weili faces off against former champion Joanna Jedrzejczyk.

Odds are posted across the market, but we will use the 5Dimes Sportsbook numbers as we break down this weekend’s fight card with a look at all 12 matches and some deeper detail on the five main card fights.

Action starts in the bantamweight division with Guido Cannetti at +115 against Danaa Batgerel. This is the second UFC fight for the -135 favorite Batgerel, who lost his debut back on August 31 against Alateng Heili. Cannetti is shaking off a lot of cage rust here with a layoff of 17 months since losing to Marlon Vera in November 2018. The long layoff seems to be the reason why Batgerel is such a clear favorite, as he didn’t exactly fight in top promotions before getting a UFC shot and Cannetti has five years worth of sporadic UFC appearances. I’d have to look at the underdog here if anything.

Giga Chikadze is +140 with Jamall Emmers at -160 in the next fight, which comes in the featherweight division. These are two newcomers to the card. Originally, the fight was supposed to be Douglas Silva de Andrade vs. Movsar Evloev, but both guys pulled out due to injury. Chikadze beat Brandon Davis by split decision in his UFC debut after a bit ground and pound flurry. This is the debut for Emmers, who lost to Julian Erosa back in June 2018 on the Dana White Contender Series. Emmers is the more accomplished and experienced fighter, but -160 seems a little steep here. If you want to get involved, I think the dog is the play.

The last fight on the prelim card, which is on ESPN+, is in the women’s strawweight division between Emily Whitmire and Polyana Viana. Viana is the -115 favorite after some initial action on her, but this looks to be a coin flip for all intents and purposes. This is definitely a concerning matchup for Whitmire. She has lost via submission twice in her last four fights and six of Viana’s 10 wins are by sub. All 10 of Viana’s wins are by stoppage. Whitmire is more of a win-by-decision kind of fighter. The move on Viana looks right here. She’s the side I’d go with.

Coverage of UFC 248 shifts to ESPN beginning with the matchup between Gerald Meerschaert and Deron Winn. Winn is a -140 favorite to bounce back after his loss to Darren Stewart. It was the first loss for Winn, who came in at 6-0 and it was of the split decision variety. This is an interesting fight for Winn because Meerschaert is the far more experienced fighter and Winn hasn’t seen anybody with a ground game remotely close to the +120 underdog’s activity on the canvas. There is also a huge size difference here with the 6-foot-1 Meerschaert and the 5-foot-6 Winn. Winn is the more athletic and faster fighter, but Meerschaert presents a lot of challenges. This is another one in which I lean to the dog side.

Rodolfo Vieira’s UFC debut was very impressive with a submission win over Oskar Piechota. Vieira is now a -750 favorite against Saparbeg Safarov. There really isn’t much to say about this fight. Safarov did win for the first time in three UFC tries in his last fight, but Vieira looks like a guy with a ceiling in the middleweight division. He’s the pick, but only as an open parlay piece multiplier.

Mark Madsen’s perfect record is on the line against Austin Hubbard in the lightweight division. Madsen is -220 to stay unblemished against Hubbard, who is 1-1 in his UFC career to this point. Hubbard was the LFA champion when he made the leap. Madsen is 35 already, so this isn’t a high-ceiling guy in the division and he beat Danilo Belluardo in his debut fight. The -220 price seems pretty high here in my estimation. Madsen’s wrestling game is top-notch as a silver medalist in Rio in 2016, but this will be a little bit stronger of a test as far as MMA fighters go. He should still win, but maybe the value is on Hubbard here.

The final fight on the prelims is between Sean O’Malley and Jose Quinonez. O’Malley is a -365 favorite, so it sure seems like the ESPN portion of the broadcast could be a bit of a dud if all of the big chalk holds up. O’Malley is a perfect 10-0 with seven stoppage wins, but he hasn’t been in the Octagon since March 3, 2018. These two were supposed to fight way back at UFC 229, but O’Malley was forced from the fight because of a positive test for ostarine. A follow-up test found residual ostarine, so he missed out on his fight against Marlon Vera. Now he gets his shot at Quinonez, who split his two 2019 fights. Given the price differences we usually see for guys off of long layoffs, the fact that we don’t really see one here is pretty telling. The favorite should hold up.

Max Griffin has dropped three of his last four fights and his only win came against Zelim Imadaev by majority decision in what was Imadaev’s UFC debut. While we have to consider that Griffin’s losses came against Alex Morono, Thiago Alves, and Curtis Millender, who are all solid fighters, we still have to look at the record. Those were all losses and all by decision. Griffin just wasn’t active or accurate enough to win.

Why would that be any different here against Alex Oliveira? Well, Oliveira may be firmly on the backside of his career with three straight losses to Gunnar Nelson, Mike Perry, and Nicolas Dalby. This is a huge fight for both guys. Griffin is 34 and Oliveira is an old 32 with 28 fights to his name. I’m not sure either guy is worthy of a bet in this one. The only thing that seems likely is that this one goes to decision, but you’re going to have to pay for the over 2.5 when round props come out. I’ll give the nod to the slight dog with what looks closer to a coin flip, but the over 2.5 makes more sense.

We haven’t heard from Neil Magny in a while. Once one of the most active fighters in the UFC, Magny has been out of action since November 17, 2018 when he lost via knockout to Santiago Ponzinibbio. Magny popped a positive test in advance of his fight against Vicente Luque and is now coming back off of the suspension. He certainly has a lot to prove against Li Jingliang, but he will have to do so as a pretty decent underdog at +155. Magny has lost to some really good fighters like Rafael Dos Anjos and Demian Maia since joining UFC. Is Jingliang in that category?

It seems like he is getting there. Jingliang has three straight wins, including a couple via knockout. His only UFC loss over the last 4+ years came against Jake Matthews. Jingliang hasn’t fought the caliber of fighters that Magny has and the underdog has a big reach advantage in this fight. The long layoff is working against Magny here and it may take him a little time to get back into rhythm. Jingliang is the look here, but once Magny shakes off the rust, he’ll be a buy low candidate.

Drakkar Klose has bounced back rather nicely from his first career loss. David Teymur beat him back at UFC 218 in December 2017. Since then, Klose has won three straight fights, all by unanimous decision. He finds himself a sizable underdog here against Beneil Dariush, though. Klose is stepping up in class a little and this is only his second fight in 16 months. These two were supposed to fight back in July, but the fight was pushed back due to an injury for Dariush.

Now the fight is on, as Dariush also rides a three-fight winning streak into action. He’s won his last two fights by submission, including a first-round stoppage against Frank Camacho last time out. Dariush has always bee a guy with a really high ceiling in this division, but every time he starts to reach new heights, he falls back. This is a must-win type of fight for him if he wants to keep advancing and he should get it.

Joanna Jedrzejczyk has been eagerly awaiting this moment since April 7, 2018. That is when Joanna lost the women’s strawweight championship to Rose Namajunas. She fought Valentina Shevchenko for the vacant women’s flyweight belt and lost for the third time in four fights. A win over Michelle Waterson set up this title shot with Zhang Weili. For Joanna, this is a chance to get back to the mountaintop.

For Zhang, this is a chance to fight for a country, for a title, and for herself. Zhang left China early because of the coronavirus concerns and bounced from Thailand to Abu Dhabi to the US for the fight. The unconventional schedule may be a little bit tougher for Zhang, but she is 4-0 in her UFC career and just knocked out Jessica Andrade for the title.

Still, Joanna is the best 115-pound female fighter we’ve ever seen. Maybe Zhang is on her way to that level, but it is hard to say that she is there now. Joanna has fought the best this division has to offer. I have to look at the fighter that I think is a very live dog here.

Israel Adesanya looks for his second title defense in this matchup against Yoel Romero. The press conference was lighthearted and fun, but these two guys will be all business when they get into the Octagon. Romero is 42 years old and this is probably it for him as far as title shots go. It almost seems like a legacy nod that he gets one after back-to-back losses to Robert Whittaker and Paulo Costa. Romero missed weight in the loss to Whittaker and still fell short.

Adesanya is a special fighter. He’s fast. He’s powerful. He’s smart. He has a great cage IQ. He’s won by decision and he’s won by violent knockout. He’s got a tremendous ceiling in this middleweight division and he should add another title defense here. It would be a great story to see Romero win, especially in what could very well be his last fight, but Adesanya is faster, stronger, and a lot bigger. It’s too much for Romero to handle.