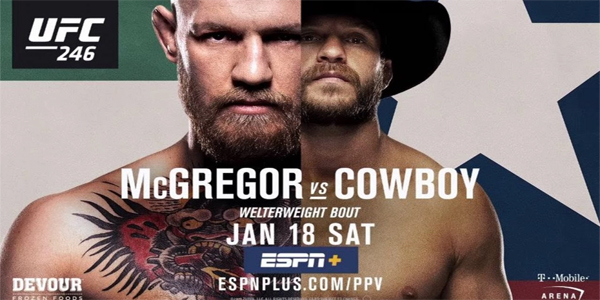 It feels like it has been a year since the last UFC event.

Okay, okay, save the tomatoes for a good pasta sauce, not for throwing at me.

The first UFC event of 2020 is a big one. UFC 246 at T-Mobile Arena in Las Vegas marks the return of Conor McGregor to the Octagon to face longtime fan favorite Donald “Cowboy” Cerrone. It is rare to see a pay-per-view card without a title fight, but there are a lot of former titleholders and contenders on the slate.

We look ahead to all 12 matchups with some more detailed breakdowns of the main card thanks to the help of the odds at 5Dimes Sportsbook for this UFC 246: McGregor vs. Cowboy event.

Things actually get started in the women’s flyweight division with a match between Sabina Mezo and JJ Aldrich. This is a coin flip to begin the evening with Aldrich now the slight betting favorite at -115. As usual, the over is heavily juiced at 2.5 and -380. Mazo is one up and one down in her UFC fights after being a champion in LFA. She won over Shana Dobson at UFC 241 and lost her debut fight to Maryna Moroz. Aldrich was knocked out by Maycee Barber back in March, but has four decision wins in her last five fights otherwise. Aldrich by decision looks about right here.

Next we head to the men’s bantamweight division for the only scrap at 135 pounds of the night between Brian Kelleher and Ode Osbourne. Osbourne, a UFC debutant, is the -140 favorite here. He was one of many Dana White Contender Series finds and his win over Armando Villarreal was enough to get him a spot on this Las Vegas card. Kelleher obviously has a massive experience edge, particularly at this level, but he’s coming off the shelf with more than a year’s worth of cage rust and hasn’t won in nearly two years with losses to John Lineker and Montel Jackson. This does look like a fight designed to give Osbourne a big debut win.

The final UFC Fight Pass fight comes in the light heavyweight division between Aleksa Camur and Justin Ledet. Ledet is more of a household name, but he is the short underdog at +100 here. Camur, you guessed it, another Dana White Contender Series find, is 5-0 in his young career. His win over Fabio Cherant got him a contract and now he’ll take on Ledet, who has lost consecutive fights to Aleksandr Rakic and Johnny Walker. This is a really important fight for Ledet, who has been in the UFC for several years, but doesn’t fight often and has a real chance of getting lost in the shuffle. With his back against the wall, it will be Ledet for me at even money.

We shift gears to ESPN and to the lightweight division with Drew Dober and Nasraq Haqparast. This is one of the biggest lines of the night with Haqparast at -330. The over is also juiced pretty heavily at -185 and 2.5 rounds. Dober hasn’t been bad of late, with four wins in his last five fights, including a very impressive first-round win over Polo Reyes following a rare loss to Beneil Dariush. Haqparast does have the higher ceiling and likely wins the fight, but it will be interesting to see if Dober stays aggressive. If he does, the under 2.5 could be a little more interesting, particularly with Haqparast off of a KO win of his own. I’d actually take that under shot since the side is sort of cost-prohibitive.

Let’s see how Askar Askarov comes off of the first non-win of his career. Askarov fought to a draw with Brandon Moreno back in September to snap his unblemished 10-0-0 record. That was Askarov’s UFC debut and it was clear that he struggled with the step up in class. That being said, it was also his first fight in 15 months. This turnaround is a little quicker to fight Tim Elliott. Back in October, Elliott came off of nearly 22 months away from the Octagon to lose to Deiveson Figueiredo. I would expect another loss here. We’re only paying -140 on Askarov and I think it’s a good bet and one of the best on the card.

Andre Fili is +115 to Sodiq Yusuff’s -135 in the featherweight division with a 2.5 total and a -120/100 split on the over/under. Yusuff is 3-0 in the UFC since catching Dana White’s eye on the Contender Series back in July 2018. He’s controlled all four of his fights with a lot of aggression and a high level of athleticism. Fili is a step up in class, as the line implies. This is one where I like the small dog. Fili’s got a better wrestling background than Yusuff and is more experienced as a grappler and on the ground. This price looks a little too high at +115.

The hottest prospect in the women’s flyweight division is Maycee Barber and this fight against Roxanne Modafferi isn’t expected to take any of that steam away. Barber is a -900 favorite to finish out the ESPN portion of the broadcast. It would be nice to see Barber get tested a little bit here by the savvy 37-year-old Modafferi. Barber’s striking power and young gas tank will be more than enough to get the win, but for Barber’s future, she could use something of a test here.

The second-most lopsided fight per the odds on the main card is this one between Anthony Pettis and Diego Ferreira. Pettis was on top of the world at UFC 181 with a win over Gilbert Melendez to beat somebody other than Benson Henderson in a title fight. Since then, Pettis has lost seven of his 11 fights, including his most recent appearance against Nate Diaz. The cut he suffered in training won’t be an issue this time around, but Pettis’s major fall from grace could continue to be.

The key difference between this fight and the Diaz fight is that Diaz was accomplished against fighters of Pettis’s ilk. Ferreira has an impressive 16-2 record, but this is easily the most accomplished fighter he has faced in his career. That makes this a huge fight and a huge opportunity for Ferreira. The amazing thing is that Ferreira is actually two years older than Pettis and their respective trajectories seem to be going in opposite directions.

I’ll look for Pettis to turn the clock back here. Ferreira needs to prove it to me against a guy like Pettis to lay more than $2.

The women are well-represented on the first card of 2020. Alexa Grasso and Claudia Gadelha will flip coins in the Octagon at -110 both ways in this one that will likely require the judges to pick a winner. Each of Gadelha’s last four fights have gone 15 minutes and she’s been on the wrong end of two of them to fall to 17-4. She looked good in her last fight, a unanimous decision win over Randa Markos, but her inconsistency is pretty frustrating as a handicapper.

The same can be said about Grasso, who came into the division with such hope and optimism, but she is 2-3 in her last five fights, including a submission loss to Tatiana Suarez. Grasso lost a majority decision to Carla Esparza last time out. Overall, these women just aren’t consistent enough to bet and that’s why we’re looking at -110 both ways.

The time of reckoning just might be here for Aleksei Oleinik. He has lost his last two fights to Walt Harris and Alistair Overeem via first-round knockout. The 42-year-old just might not have it anymore. He’s giving up a good five inches of height to Maurice Greene in this one. Greene is nowhere near as accomplished as Oleinik, that much is true, particularly with the first-round loss to Sergei Pavlovich.

To me, there are two ways to play this fight. You can bet Oleinik by submission or Greene by knockout. Oleinik hasn’t won by knockout in over five years, but he does have four submission wins. His path to victory is to get Greene on the ground and get a sub. Greene has some sub wins at lower levels, but he won’t get one here. It’ll be a KO for him. With plus money on both sides when props show up, this is a minor arb opportunity and you can shade to whichever side you like more with a bigger bet.

Pick: Oleinik by sub OR Greene by KO

Gee, I wonder if this fight will go over 2.5 rounds? The -560 juice is one of the highest we have ever seen for this matchup between Raquel Pennington and Holly Holm. Pennington has been pretty quiet since her loss to Amanda Nunes in that great fight back at UFC 224. She had a hangover loss to Germaine de Randamie after that and then beat Irene Aldana by split decision. She isn’t exactly coming into this fight in the best form.

Then again, neither is Holm. Of course, her losses are Nunes, Cris Cyborg, and de Randamie in her last five fights, with wins over Bethe Correia and Megan Anderson. To be totally honest, I don’t want to put money on either one of these girls in this fight. They’ve both been inconsistent as can be and have struggled when stepping up. Is this a step up in class for either fighter? Can we call it that at this point in time? I’d have to lean Holm given that she’s a better striker and Pennington has very limited stoppage ability.

Donald “Cowboy” Cerrone’s best days are very much in the past, as we all know. He’s still a fan favorite and he never shies away from a fight and you have to respect the hell out of that. Of course, it doesn’t mean you have to bet on him. Cerrone, now 36, has taken a lot of punishment in his career and that has been true of his last two fights against Justin Gaethje and Tony Ferguson, the latter of which was stopped by a doctor. Cerrone is a showman and one of the sport’s good guys. He won’t go down without a fight here.

He’s likely to go down here, but let’s see what Conor McGregor looks like in this fight. McGregor has one fight since November 12, 2016 and he lost to Khabib Nurmagomedov. McGregor is a great unknown here. Once one of the most feared guys in the sport, now he is a question mark. He retired last year, only to return this year. He also hit a guy in the face in a Dublin bar, got arrested for robbery, got into a post-fight scuffle, and threw a dolly at a bus. The guy is a loose cannon to say the least.

What that means for this fight, and for Cerrone, in particular, is anybody’s guess. There will be a lot of people rooting for Cerrone, but I just don’t know if he has enough at this point.