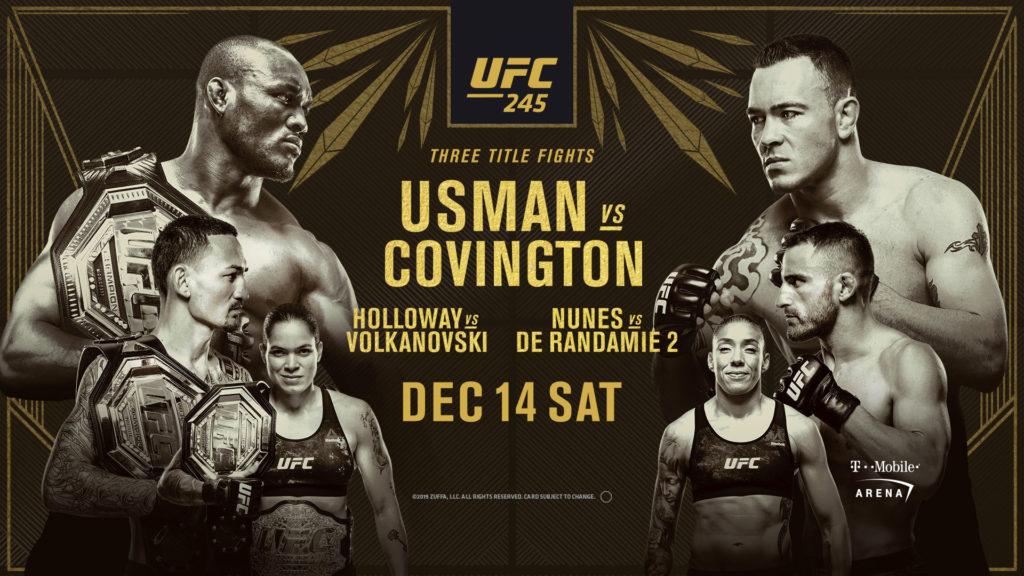 The holiday season has been pretty light as far as UFC events go, but this weekend makes up for it in a big way. There are three championship fights on the UFC 245 card at T-Mobile Arena in Las Vegas, including the main event in the welterweight division between Kamaru Usman and Colby Covington. Really, there are three main events here during what should be an outstanding fight card.

There are 13 fights in total with the first four on UFC Fight Pass, the middle four on ESPN2, and the final five on pay-per-view. This is the second-to-last event for 2019 for the UFC, but one of the most anticipated cards of the year.

We start on Fight Pass and in the middle weight division with a matchup between Oskar Piechota and UFC debutant Punahele Soriano. Piechota has been bet into the small -115 favorite. A total of 1.5 juiced to -155 on the over suggests we should have a stoppage winner here. Soriano’s only career decision win with his perfect 6-0 record came in his Dana White Contender Series match against Jamie Pickett. He was giving up some size and reach, but had a strong enough appearance to get this fight with Piechota. Piechota has dropped his last two fights and really needs a win here, but Soriano looks like a pretty good prospect and is worth the -105 shot.

Jessica Eye makes her return at +155 against Viviane Araujo at -175 in the women’s flyweight division. The judges are expected to weigh in here with a heavily juiced over 2.5 on the total. Eye took an absolute beating in the loss to Valentina Shevchenko back at UFC 238 and suffered one of the more vicious knockouts we’ve seen in the women’s division. She had been on a career resurgence with three wins and the title shot, but Shevchenko’s head kick stopped all of that. Araujo is the easy play to make here at -175 as Eye has a lot of questions to answer coming off of such a stunning KO.

Brandon Moreno and Kai Kara-France meet in the men’s flyweight division with a match expected to go the distance with the over 2.5 at -230. France is the -165 favorite with +145 on the takeback for Moreno. Sergio Pettis had the chance at this slot, but because he was exploring his options, Moreno got on the bill. Moreno scored a really nice win in LFA over Maikel Perez earlier this year in his effort to get back to UFC, but then fought to a draw against Askar Askarov in September. France is looking to go 3-0 in 2019 and 4-0 in UFC in this fight. His last loss came nearly three years ago and it seems unlikely he’ll get one here.

The “main event” of the Fight Pass card has Daniel Teymur against Chase Hooper at 145 pounds. Teymur scored his first UFC win last time out with a decision win over Sung Bin Jo, but he was not impressive up until that point with two submission losses and a 15-minute defeat against Danny Henry. This is the UFC debut for Hooper, who is undefeated in nine fights. Hooper has a big height advantage, but he has two draws in his last three fights since his Dana White Contender Series cameo in July 2018. This looks like a pretty poor fight overall and neither guy is worth your money.

To ESPN2 we go, where Matt Brown is one of the biggest favorites of the night against Ben Sauders. Brown is a -345 favorite in a fight expected to end within the first 7:30. Brown is coming off the shelf for the first time in two years, as he last fought Diego Sanchez back on November 11, 2017. The layoff was probably good, as he had lost his three previous fights before that one. Saunders has lost three straight and four of five. This is a chance for Brown to get his feet back under him and he should win, but that is a big price for a long layoff.

Omari Akhmedov and Ian Heinisch meet in what should be a competitive middleweight fight with Heinisch installed as a -140 favorite and the over 2.5 at -200. Heinisch is coming into this fight in a bounce back spot after suffering his second career loss at the hands of Derek Brunson. Akhmedov ahs been impressive, but this is a big step up in class for the 32-year-old. Heinisch by decision is the most likely outcome, as all three of his UFC fights have gone the full 15 and all five of Akhmedov’s most recent fights. The over 2.5 at -200 is actually a really good investment here as a straight bet or a parlay piece.

Irene Aldana and Ketlen Vieira line up for the second of three women’s fights on the card. Vieira may be a little bit surprising as a -170 favorite over Aldana. Vieira is 10-0, but she’s had a couple of split decision wins in her career and also hasn’t fought in over a year and a half. Aldana has won four of five in the UFC and is fighting for the fourth time this year. At +150, I really like the underdog with some extra bark in this fight. This line just seems to be too high.

Expect some fireworks in the final ESPN2 bout between Mike Perry and Geoff Neal. Neal is a big favorite at -255. He’s shown more finishing power than Perry and that is why he is such a big favorite. Even if this fight goes the distance, Neal projects to be the aggressor and he also has more paths to victory. For Perry to catch Neal and deal his third stoppage loss in 15 fights seems like a tall ask. Neal is a touch pricy here, but he’s a good money line or open parlay piece.

We don’t really see a lot of men’s fights lined like this when they are expected to go deep into the third round. We see women’s fights like this, but not really the men. But that is the case here with fan favorite Urijah Faber and Petr Yan. Faber will hang in there. He will take abuse and keep ticking. His return against Ricky Simon from 2.5 years off was a smashing success, as he scored his first knockout win since January 20, 2007. No, that is not a typo.

The problem here is that Yan has been winning in a variety of different ways and has a perfect 5-0 record in the UFC. His only career loss came against Magomed Magomedov and he got revenge for that loss just about a year later. Yan hasn’t fought great competition in the UFC, but he’s been fighting and training and staying sharp. Faber’s outlier performance last time out led to an awesome story, but it’s probably back to reality for Faber here.

Remember when we would have seen Jose Aldo in the title fights on these types of cards? Now he’s almost a $2 underdog to Marlon Moraes. Aldo was beaten by Alexander Volkanovski, who gets the title shot on this card against Max Holloway. Aldo, meanwhile, has to try and beat Moraes to salvage any future opportunity at the strap. Aldo is also moving to bantamweight here, which is another reason why the line is as big as it is.

Marlon Moraes dropped his last fight, which was a title shot against Henry Cejudo. In order to get another one, he can ill-afford a slip-up here, especially with Aldo changing weight classes. Based on the line, he shouldn’t have too much to worry about, but that was a brawl against Cejudo earlier this year. With the uncertainty surrounding Aldo with the weight change, it has to be Moraes or nothing here.

It is nice to see Germaine de Randamie get another title shot. After all, she hasn’t done anything wrong in the UFC and beat Holly Holm back at UFC 208 for the title. Amanda Nunes holds two belts, as she owns the women’s bantamweight title and the women’s featherweight title. This one is in the bantamweight division and is a rematch from the 2013 fight when Nunes won via first-round knockout.

That was a long time ago and de Randamie has fought well recently, but Nunes is pound for pound one of the best female fighters that the sport has seen. She’s fought and beaten the best of the best. She’s also had easy wins in her last two fights in which she hasn’t taken on too much punishment. It’s Nunes here. It has to be.

With the championship rounds expected to come into play, Alexander Volkanovski gets the shot of a lifetime against Max “Blessed” Holloway. Volkanovski has done everything that he has needed to do, including step up in class to top Jose Aldo. The thing for Volkanovski is that he hasn’t fought tremendous competition on his way up the ranks. He’s done what he has needed to do and has been very impressive at times, but he hasn’t fought a guy as accomplished and still on top of his game as Holloway. Aldo has accomplishments, but his best days seem to be behind him.

The worry here for Holloway is that he has a lot of mileage on him. He’s fought deep into a lot of fights, including recently against Brian Ortega, Dustin Poirier, and Frankie Edgar. I wouldn’t go so far as to say that he’s ripe for an upset, but also, it has been a long two years for him. Volkanovski is stepping up in class, but Holloway draws another top-end fighter in a long string of those types of opponents. He likely wins here, but a loss would not be shocking given what the last two years have consisted of for the champ.

Identical 15-1 records are on the line and so is the welterweight title when Colby Covington and Kamaru Usman meet up in the main event at UFC 245. Covington, who was a previous strapholder after beating Rafael dos Anjos, gets another crack at it here. The first thing you’ll notice is the heavily juiced 4.5. Each of the last five fights has gone the distance for Covington, including back-to-back 25-minute efforts. His gas tank is always full and he’s been able to outlast a lot of opponents.

The only person with a fuller gas tank in the welterweight division could be Kamaru Usman. Usman has gone the distance in his last four, including three 25-minute scraps. He also beat Rafael dos Anjos, but took the belt off of Tyron Woodley at UFC 235. Usman is the star of this division and as good as Covington is, it will be hard for Usman to not retain the belt over 25 minutes in this one.