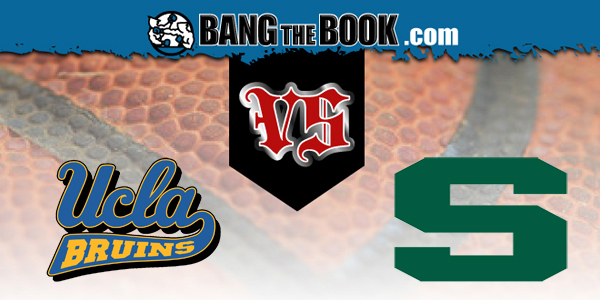 The NCAA Tournament officially starts today with the four play-in games with tip times (ET) of 5:10, 6:27, 8:40, and the late one at 9:57 between UCLA and Michigan State. The NIT also continues tonight with NC State vs. Davidson and SMU vs. Boise State. Only six games are on the card, but all of them have some degree of importance.

With that in mind, our spotlight game does fall in the Big Dance and it will be the late game between UCLA and Michigan State. The Spartans have taken money throughout the week to push this line out to -2.5 with a total of 135 at Bovada Sportsbook. This week is unique in that these first-round lines, play-in games, and NIT matchups have been up for several days in advance of the game and have had a lot of time to marinate.

While this isn’t the sexiest game of the play-in round, it is the late one and we like to highlight those as much as possible so readers have lots of time to find it.

Is this a Pac-12 vs. Big Ten commentary more than anything? We all know that the Big Ten is clearly the best conference in college basketball this season. It is a big reason why Michigan State made the field of 68 to begin with. The Spartans scored some big wins and beat both #1 seeds from the conference and also Ohio State.

UCLA’s resume is a lot less exciting, especially because the end of the year featured four straight losses. The Bruins fell in overtime to eventual Pac-12 winner Oregon State in the conference tournament on the heels of losses to Colorado, Oregon, and USC. Even in the non-conference, UCLA lost to San Diego State and Ohio State. This is a Bruins team that went 2-6 in Quadrant 1 games, 3-3 in Quad 2 games, and padded some numbers by going 12-0 against Q3 and Q4 teams.

This is also a UCLA team that fell on the right side of variance in close games with a record of 10-3 in games decided by six or fewer points. So, no, it isn’t all about the gap between the Big Ten and the Pac-12. UCLA just doesn’t have a savory profile, even if Michigan State has plenty of warts as well.

What does UCLA do well? The Bruins do turn the ball over only 16.6% of the time, which ranks in the top 60 nationally. They’ve also made just shy of 37% of their three-point shots, a skill that will have to be on display here tonight if the Bruins want to have a good chance of advancing. The problem is that UCLA only takes a three 31.7% of the time, which ranks 300th in the nation.

The worst part for the Bruins is that this is the second year for defensive-minded head coach Mick Cronin and the Bruins are not good defensively. Their 50.7% eFG% against ranks 196th in the nation. They don’t force turnovers. They do rebound well overall and especially on the defensive end, but this is a hard profile to love.

Speaking of hard profiles to love, Michigan State went 5-10 in Quadrant 1 games, but 10-2 against teams Quad 2 or lower. Unfortunately, you face a lot of really good teams in the Big Ten on a regular basis. At the time, Duke was a Quad 1 game back in December and that was a big non-conference win, but we saw what the Blue Devils did from that point forward.

Recency bias seems to be a big deal in the eyes of the Selection Committee. Nobody thought Michigan State had a chance to make the Dance with a 4-9 record in conference play and a 10-9 record overall, but Sparty went 5-2 over the last seven conference games, including wins over Illinois, Ohio State, and Michigan, so that was enough for the Committee to give MSU the benefit of the doubt.

The Committee seemed to have its mind made up and ignored the 11-point loss to Maryland in Indianapolis during the Big Ten Tournament.

The Spartans have one of the lower turnover rates in the country on defense, which is both a byproduct of the Big Ten, where ball security is high, and also that this just isn’t that great of a defense. Opponents have only made 31.5% of their three-point attempts against the men from East Lansing. Michigan State has only made 32% of its own shots from beyond the arc.

This is a very experienced team, though. Upperclassmen play the bulk of the minutes and sophomore Malik Hall played a good amount as a freshman. UCLA is a team led by sophomores primarily, so it will be interesting to see which team has more poise in this win or go home format.

This game looks like an under to me. Games with high levels of importance are often played to slower tempos. UCLA will be happy to oblige, as they play at a glacial pace under Cronin. Michigan State is much quicker on the tempo side, but also a poor offensive team, so it would behoove them to slow it down.

Fouling at the end of the game would obviously be a concern, so maybe the FIRST HALF UNDER is the best look here at 63. I would anticipate a feeling-out process between these teams as well. There wasn’t a lot of non-conference basketball this season and these are two good coaches that should have been able to accomplish a lot during film study.

The official pick will be the full-game under, just to ensure that everybody has access to it, but I do think a slow start is my preferred course of action because teams foul religiously to extend games when they have one opportunity to extend the season.