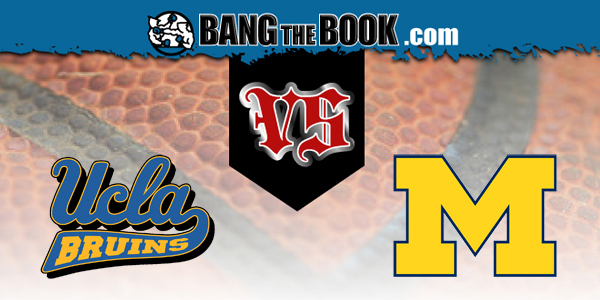 The last of the Final Four teams will be decided in the late game on Tuesday night between UCLA and Michigan. Michigan is supposed to be here as a #1 seed. Going into the Elite Eight, UCLA has the most wins in the NCAA Tournament with four by virtue of being a #11 seed in the play-in game against Michigan State. The Bruins trailed by as many as 11 in that game, yet here they are, one game away from winning the East Region.

It will be a tall task, as Michigan is favored by seven points with a total of 135.5 at Bookmaker Sportsbook, but the Pac-12 has been up to a lot of tall tasks so far and the Bruins hope to conquer another higher-seeded team.

Let’s dig into the particulars of this one and see if we can pick a winner in the game.

Beauty is in the eye of the beholder. Some people would call UCLA’s run to the Elite Eight quite beautiful. Others would call it lucky. Alabama had an out-of-body experience at the free throw line in the Sweet 16 going just 11-of-25 on free throw attempts. Herb Jones was 2-of-7 as a 71% shooter, which is roughly where the Tide finished as a team.

The Bruins did show a lot of panache in coming back against Michigan State, but Sparty was one of the last teams in the field. The win over BYU was an impressive one and one of UCLA’s top performances to date, but a 20-point win over a gassed Abilene Christian team didn’t really impress anybody.

Here’s the thing, though. UCLA has scored 1.202, 1.215, 1.069, and 1.109 points per possession in this tournament. The Bruins have taken phenomenal care of the basketball with low turnover totals in all four games. In fact, so low that they’ve won the turnover battle in each one, despite a pretty low takeaway percentage.

One key difference is that UCLA is 34-of-85 from three. Opponents are collectively 20-of-82. The Bruins are not a great three-point defense or really a great defense at all. They are the second-lowest rated defense left in the field. Only Oregon State, a team having similar luck defending three-point shots, is lower.

The offensive surge for the Bruins coupled with some good luck and some play on the defensive end have this team in this position, sitting in the Elite Eight with a winning streak in the NCAA Tournament that matches the losing streak that went into Selection Sunday. Does it end here?

Everybody, myself included, expected Florida State to be a bad matchup for Michigan. The Seminoles had one main weakness and that was their turnover percentage on offense. They were facing a Michigan defense that doesn’t force turnovers and only forced three against LSU. Florida State proceeded to play arguably its worst game of the season and threw the basketball away like it was on fire in the Sweet 16 game.

Or, we can look at it from the other side. Maybe Michigan is really that good. Maybe the Wolverines are not only deserving of the #1 seed that they got, but are truly one of the five best teams in the country. The proof seems to be in the pudding, not only with this NCAA Tournament run sans Isaiah Livers, but with the full-season body of work from the metrics.

Michigan went into the Elite Eight as one of three teams left in the field in the top 10 in both offensive and defensive efficiency. Baylor and Gonzaga were the other two. The Wolverines survived a faux-vid pause when the entire Michigan athletic department shut down, even though the men’s basketball team had no cases. The Wolverines bounced back from the loss to Ohio State in the Big Ten Tournament. They silenced doubters, myself included against both LSU and Florida State.

So what comes next? Do the Wolverines, an extremely efficient offense and defense, take advantage of the opportunity to play an 11 seed for the right to go to the Final Four? That seems like the case at this point, but will they win by margin and cover the seven-point spread in the process. Extra possessions won’t come easy for a defense with a 14.8% TO%, but points could, as the Wolverines are in the top 15 in 3P% and the top 40 in 2P%.

Not to mention, where Alabama missed free throws and basically lost the game at the stripe, Michigan is a 77.4% free throw shooting team. Livers was one of the best at 87%, but the Wolverines have several high-usage players that do well at the line and can put this game away.

Michigan should win this game. We’ll start with that. As much as the Pac-12 has cuddled up at night with rabbit’s feet, shamrocks, horseshoes, and a magic lamp with a genie in it, the Wolverines seem to have just about every advantage in this game, including one on the sidelines, as Juwan Howard has done a phenomenal job with this team.

Will the Wolverines cover the seven points? Is the total a better way to look here? I would say Michigan -7 is the play. The Wolverines are such an efficient offense and they shoot the ball so well. As good as Alabama is, the Crimson Tide are outside the top 100 in 2P% and exactly 100th in 3P%. They were a better defensive team that played at a high enough pace to score a lot of points.

Michigan State was no good on offense and Abilene Christian was stepping up in class. BYU was a good offense, but in a West Coast Conference with minimal defense.