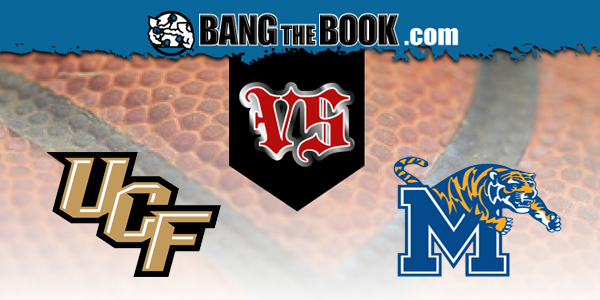 A smaller college hoops card is on the docket for Monday as we look to repeat last week’s successes with the spotlight games. UNLV and Nevada went over 142 in a blowout win for the Wolf Pack to round out a good week with six winners in seven picks. It’s been a nice run cherry picking these spotlight games. Hopefully you’ve been along for the ride.

Choices are pretty limited for Monday, as we’ve got day basketball in a few conferences and then the late board is mostly made up of SWAC games. There are some bigger matchups, but our focus falls in the AAC with a battle between UCF and Memphis.

The Tigers are -9 with a total of 133 at Bookmaker Sportsbook and you can check this one out on ESPN+ if you so desire.

It’s been a tough season for the Knights and head coach Johnny Dawkins. Every game has been a struggle in some way, shape, or form. Of course, that’s what happens when you’ve played the third-toughest schedule in the country according to Bart Torvik. Ken Pomeroy ranks the slate seventh in his rankings.

Torvik has the UCF schedule down for the third-toughest in AAC play so far and it has led to a lackluster 2-6 start. UCF won the conference opener over Cincinnati and then beat an East Carolina team that has hit a myriad of COVID issues lately back on January 27. Otherwise, UCF has lost six AAC games, including Saturday’s defeat at Wichita State in overtime.

This is a better team than the stats and record would indicate, but still a team with major problems. The Knights are 10th in 2P% defense in conference play. They’ve turned the ball over too much on offense to expose those defensive shortcomings even more. UCF only got in three non-conference games. They scored really nice wins over Auburn and Florida State and got blown out by Michigan. For whatever reason, conference play has been something of a disaster.

The AAC is a solid conference with a good amount of depth, but UCF should have had better showings against South Florida and Temple in those road losses. That was during a stretch when the team couldn’t score. During the five-game losing streak that featured those two games, UCF scored .853, .915, .848, .895, and .994 points per possession. Consistent scoring has been a problem.

But, UCF could be a positive regression candidate. The Knights are only shooting 56.1% on close twos, so they’ve had issues finishing their bunnies and putbacks. This isn’t a very tall team, which is part of the reason why they’ve struggled at the rim. On the plus side, the Knights have seen a little bit of improvement recently, including a good offensive performance in the Wichita loss with 1.031 PPP.

Memphis has some offensive shortfalls as well. The Tigers, like the Knights, have struggled at the rim, finishing off just 57.4% of their close twos. Recently, Memphis has taken to finding solace beyond the arc. Over the last four games, the Tigers are shooting 48.8% from three with 41 makes on 84 attempts. They shot 45% from 3 against SMU last time out and still managed to lose the game.

Memphis can go into prolonged offensive droughts, as they lost both Tulsa games during that aforementioned stretch, despite playing well defensively. Interestingly enough, Memphis is still first in the AAC in eFG% through eight games. The Tigers are awful at the free throw line at 57.2% and have turned it over on more than 24% of their possessions in conference games.

The Tigers are fourth in Block% in the nation. They are third in adjusted defensive efficiency overall per Torvik and 11th in eFG% defense. Points are hard to come by against them. If they could ever get the offensive side figured out, Penny Hardaway’s squad would be extremely dangerous.

The AAC isn’t blessed with talented offensive teams. It is a whistle-happy conference, though, so foul shots and free throw attempts sometimes bump up the scores. Only four teams in the conference rank in the top 100 in adjusted offensive efficiency. UCF is one of them, albeit barely.

SMU is a far better offensive team than UCF, but the Mustangs were able to do something no other AAC team had done against Memphis and that was score over a point per possession. Western Kentucky was the only one to do it in non-conference.

I would expect Memphis’s recent three-point spike to come back to earth. This will be more of a traditional game for them, in which they play good defense and struggle to get margin in my opinion. I’ll take the nine points with UCF, especially with a Memphis team that shoots 61.2% at the free throw line.