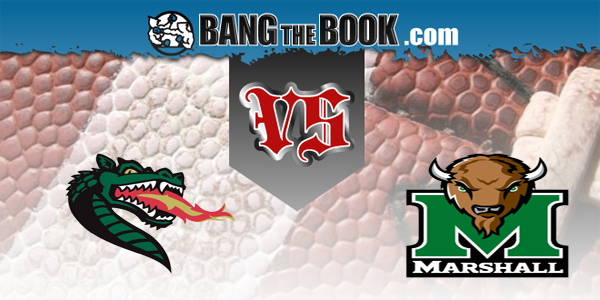 The UAB Blazers and the Marshall Thundering Herd have overcome a lot this college football season. Like so many teams around the country, long pauses because of COVID-19 have made for a disjointed season.

According to BetOnline Sportsbook, Marshall is -4.5 with a total of 43.5 on the Conference USA Championship Game.

We’ll profile both teams and look to come up with a bet on the game under the Friday Night Lights.

The Blazers did not play a game from October 31 to December 12. That final showing for the regular season was a 21-16 victory over Rice, as UAB failed to cover the touchdown spread. It did mark the return of quarterback Tyler Johnston, who is a far superior option over Bryson Lucero. That was Johnston’s fourth game of the season. He was rusty, going 9-of-18 for 217 yards, but he did throw a couple TD passes and took care of the football.

This is a different UAB team with Johnston at the helm, but there are a lot of questions as to who will actually be available this week. Several players, including star running back Spencer Brown, missed time with COVID and did not travel with the team in that win over Rice. It is anybody’s guess who will actually return for this week’s contest, but line movement on UAB from +5.5 down to +4.5 suggests that the reports are positive.

The UAB defense has remained stout as ever. The Blazers are tied for seventh in yards per play against on defense with 4.64 and they are 12th in third down conversion rate against at 31.1%. This profiles as a low-scoring game and the defense that wins the day may end up hoisting the conference championship trophy.

It is the Marshall defense that ranks first in the nation in yards per play allowed with 4.14. Marshall played one of the weakest FBS schedules in the nation, however. In fact, Marshall only played three teams with a winning record, one of which was Appalachian State in an impressive 16-6 win. The other two were FAU and Western Kentucky. Neither team had a good offense this season.

In their regular season finale against Rice, quarterback Grant Wells threw five interceptions. Wells did throw nine picks total on the season, but did so against 16 touchdowns. Marshall got good production out of him aside from that Rice game and has a matchup nightmare in tight end Xavier Gaines, who could play on Sundays next season. Marshall also ran for 4.7 yards per carry. This was a pretty efficient offense up until that last game.

UAB money isn’t a big surprise. The Blazers had a really lofty perception in the betting markets in the early going, but Johnston’s injury led to turnover problems with Lucero and then COVID hit. The hardest part about backing UAB here is they’ve played one game since Halloween and it wasn’t the greatest of data points.

On the Marshall side, many have viewed the Herd as a regression candidate at several junctures throughout the season as a team that seemed to be overperforming relative to the stats and metrics. There are also those strength of schedule concerns, as App State wasn’t quite as good as past versions. Two of UAB’s losses are Louisiana and Miami (FL).

A little bit of equity has been lost here with the move from 5.5 to 4.5 and the low total, but UAB is still the play with Johnston back and what he means to this offense.