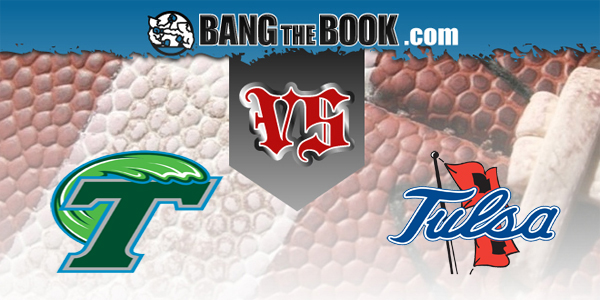 The weird and disjointed 2020 college football season has hit just about every time at some point or another, but the Tulsa Golden Hurricane have had to stay sharp through a lot of twists and turns. They’ll host the Tulane Green Wave on Thursday night, just five days removed from beating SMU 28-24 on Saturday.

Money came in early Monday morning on Tulsa to bump this line up to -6.5 at BetOnline Sportsbook after opening in the -4 range. The total has also been bet up a little from 53.5 to 55, as Tulane is 6-3 to the over and has scored a lot of points in recent games.

This is only the sixth game of the season for Tulsa, who went from September 19 to October 3 without a game and then from October 3 to October 23. They’ve played pretty regularly now, but this short-rest spot would suggest a new challenge for a team that is 4-1 SU and 4-1 ATS on the season.

Tulane, meanwhile, has somehow managed to stay mostly above the COVID fray. In fact, this will be the 10th game of the season for Willie Fritz’s bunch and they’ve been very kind to bettors with a 6-3 ATS record. They’ve covered five straight going into Thursday night’s contest.

Depending on whether or not Tulane gets invited to a bowl game, if there are enough of them to include mid-tier AAC teams, this could be their second-to-last game of the season. The only one left on the schedule is a date next Friday night with Memphis. Tulsa, on the other hand, has two games left, one against Houston next Saturday and then a big showdown with Cincinnati the first weekend of December.

How have these teams gotten to this point? What are the angles to consider in this game? Let’s find out:

Tulane has taken advantage of a lot of porous defensive play from its opponents this season. Even against the UCF Knights, Tulane scored 34 points. They’ve averaged 36.7 points per game this season and have gotten into the 30s in each of their last seven games. The rushing attack has been the catalyst with 5.3 yards per carry on 42 attempts per game.

Defensively, Tulane has only allowed 27.6 points per game, but they have also not faced many proficient offenses. They’ve faced two option teams that are having down years and gave up 49 to Houston, 37 to SMU, and 51 to UCF. Those are three of Tulane’s four losses. The other loss came against Navy in a game the Green Wave led comfortably at half.

Tulane has outscored the opposition 38-12 over the last three games, but there may be some fool’s gold in those numbers, as those games came against Temple, East Carolina, and Army. Those are three very inefficient offensive teams to say the least.

Tulsa, who shocked the college football world on October 3 with an impressive win over UCF, has been something of a sharp darling. While the Golden Hurricane should have lost a poorly officiated game to East Carolina on October 30, they’ve had nice efforts against SMU and Oklahoma State thus far. Of course, we also have a pretty big dichotomy between opponents this season. Oklahoma State and UCF are very good. South Florida and East Carolina are not. SMU is not as good as expected.

So, going into this one, there are some questions about Tulsa. The Golden Hurricane have averaged 5.9 yards per play on the season while holding opponents to 4.9 yards per play. The defense isn’t really the question, as Tulsa has a tremendous defensive line, which should be an advantage in the trenches against a Tulane team that has to run the rock to be effective.

The questions for Tulsa are really on offense. They’ve only averaged 10 points in the first half of their games this season. They’ve eventually gotten it going in the second half after making some adjustments, but the offense is kind of pedestrian at best. Big plays in the passing game have helped, as the team has averaged 250 yards passing on just 19 completions per contest. The ground game has scuffled with 4.2 yards per carry, but Tulsa has only played five games, so there will be some sample size noise.

In this one, Tulsa is the pick at -6.5. The reason is because they will be the stoutest run defense to date for the Tulane offense. Tulsa has only allowed 3.6 yards per carry. They have been a little more susceptible through the air, but Tulane is not a big passing team, averaging 26 pass attempts per game.