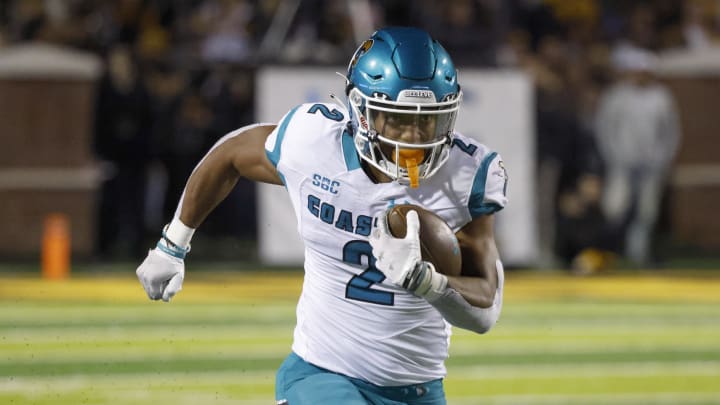 Week 9 of the 2021 college football season kicks off Thursday, October 28, with the Sun Belt Conference showdown at Brooks Stadium in Conway, South Carolina, so we bring you the best Troy vs. Coastal Carolina betting pick, tips, and odds.

The No. 24 Chanticleers search for their third straight victory over the Trojans. Coastal Carolina opened as a huge 18-point home fave on BetOnline Sportsbook, while the totals are listed at 52.5 points.

Gunnar Watson has started under center in those two games, replacing banged-up Taylor Powell. Watson has tossed for 452 yards and three touchdowns in the process, so he should get another nod in Week 9.

The Chanticleers’ unbeaten season is over

The Coastal Carolina Chanticleers (6-1; 4-2-1 ATS) put an end to their six-game winning streak last Wednesday. Their dreaming of the unbeaten season is over following a 30-27 defeat at the Appalachian State Mountaineers in Week 8.

The Chanticleers had a 14-point lead at the end of the first quarter and a six-point lead at the end of the first half, but they couldn’t satisfy the odds as 4.5-point favorites. Coastal Carolina surrendered a whopping 575 total yards (228 rushing) while racking up just 346 in a return. The Chanticleers posted only 55 yards on 29 totes, and Grayson McCall completed 15 of his 23 attempts for 291 yards and a TD.

The Chanticleers should be fired up to bounce back from a tough loss against Appalachian State. They are 7-0-2 ATS in the last nine outings at home, so the Trojans will have a mountain to climb in this matchup.

Troy’s defense is capable of slowing things down, but the Trojans shouldn’t have enough firepower on the offensive side of things to keep it close. The Chanticleers struggled mightily against the Mountaineers’ rushing, and the clash against the Trojans is a nice opportunity for redemption.

The betting trends are not helping a lot when it comes to the totals. The under is 4-2 in the Trojans’ last six games overall, and it is 9-2 in their previous 11 outings away from home. Also, the under is 4-1 in the Chanticleers’ previous five showings, but all four encounters between Troy and Coastal Carolina have gone in the over.

Last year, the Chanticleers outlasted the Trojans 42-38 as 12-point road favorites with a total of 52.5 points. The Trojans’ D will try its best in this one, but I don’t think that would be enough to keep the totals below 53 points.