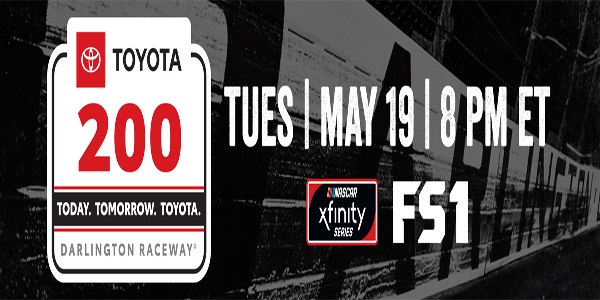 Even though we are desperately hoping for things to go right during the COVID pandemic, it was nice to see something go left this past weekend. That something was the NASCAR Cup Series with its return race at Darlington. Kevin Harvick, who was the top pick from our write-up on the Darlington Raceway 400 was the winner. Let’s see if we can go that with the Xfinity Series this time around for the Toyota 200.

The Xfinity Series makes its return with some Tuesday night racing in Darlington, South Carolina, as long as Mother Nature approves. Rain is in the forecast throughout the week, but the hope is that racing can be completed.

The timing makes sense for Kyle Busch to make a stop on the Xfinity Series circuit. Busch failed pre-race inspection and had to start at the back of the pack for the Cup Series race on Sunday and never really looked all that comfortable en route to finishing 26th. Some extra laps around the track seem like a pretty good idea.

He’s the overwhelming favorite this week, which he would be anyway, but it certainly doesn’t hurt that he was able to get behind the wheel and get some reps in. He’s -135 with the next closest driver listed at +625.

Let’s check out the odds from 5Dimes Sportsbook for the Toyota 200 and then figure out how we want to bet this one:

Starting positions were randomly drawn and Noah Gragson and Michael Annett get to start in the front row. Kyle Busch starts 26th, so he’ll have some ground to make up in order to cash at -135. Harrison Burton, the third favorite on the board, starts 12th. Chase Briscoe, the second favorite, also starts in the sixth row in 11th. There are 39 cars in the race and only nine are Toyotas for the Toyota 200.

February and early March were a little crazy, so I was a tad bit lax in my responsibilities to cover the Xfinity Series. Four races took place before the world went to hell and everything shut down. The race winners were Gragson, Briscoe, Burton, and Brandon Jones. Gragson won Stage 2 at Phoenix as well. Briscoe had another top-five finish at Daytona to go with his win at Las Vegas. Burton finished in the top five in all four races, finishing first at Fontana and second at Daytona and Phoenix. Jones led the most laps and won both stages at California before finishing 30th. He won the next week at Phoenix.

Justin Allgaier sits ninth in points, but had three stage wins before the abrupt halt to the year. He hasn’t finished higher than eighth this season. Austin Cindric, Ryan Sieg, and Justin Haley all had at least two top-five finishes in the first four races. Rookie Riley Herbst was second at Auto Club.

Now that you’re caught up, we can break this one down. The Lady in Black is a 1.366-mile oval with a big loopy curve at one end and a tighter, sharper curve at the other. Up until 2015, the Xfinity Series stop at Darlington was in the spring, but it moved to late summer when the schedule was changed around. This is going to be an extremely tough race for the drivers and the teams.

Assuming this one goes off as scheduled, it will be a night race. There are not many of those in the Xfinity Series. The drivers and the teams also have to navigate the very different ends of the track while not having practice or qualifying. We saw that play a big role in the Cup Series race and could see it play a big role here, too.

So, what do we do here? The reality is that Kyle Busch probably wins, but why bet him at -135 with so many unknowns and variables in this race. The chances of one of the other drivers taking him out seem a lot higher than usual.  If you ever wanted to take a long shot gamble in an Xfinity Series race, this is probably it.

There are some good drivers at bigger prices that are on my radar this week. One of them is Daniel Hemric at +2750. In 69 career races, Hemric has 40 top-10 finishes, but has never won. He didn’t run all of last year in the Xfinity Series. Now he is with a pretty good team in JR Motorsports. It hasn’t worked out to this point, but this is the type of time to take a guy like him. He’s an experienced driver that had 16 top-five finishes in 2018.

Austin Cindric is a guy to watch overall in the Xfinity Series and his price looks a bit high here at +1760. He is a great bet on road courses. Though this race isn’t, it will have some road course feel to it with everybody trying to get back in the swing of things and probably some tight, awkward racing. Cindric actually has six top-three finishes over his last 11 races dating back to last season. The 21-year-old has excellent backing with Team Penske and equipment could matter a lot here.

I’d be very careful with this race. The Cup Series was unpredictable enough, but this one could go a couple different ways. It could be controlled chaos or it could be a dominant win for Kyle Busch. I’ll look for option #1 and back Hemric and Cindric with some low-risk, high-reward wagers.