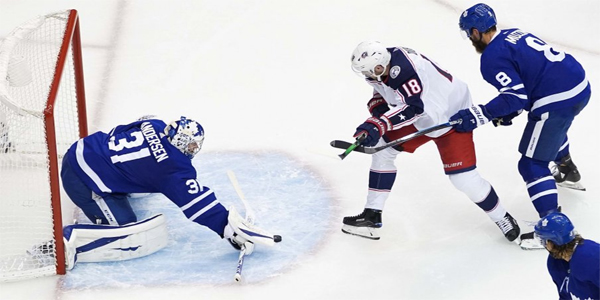 The two games in the series between the Columbus Blue Jackets and the Toronto Maple Leafs have looked nothing alike. The Blue Jackets took away time and space effectively and eventually cracked through for two goals to take down Game 1. The Maple Leafs responded with a big effort in all three zones to win 3-0 in Game 2.

On Thursday night, the swing game of the series will take place with Toronto a -155 favorite for Game 3 at BetDSI Sportsbook and other sportsbooks across the market. The Maple Leafs actually looked like the higher seed on Tuesday night, as they peppered CBJ goaltender Joonas Korpisalo until he finally surrendered a couple of goals. They added an empty-netter for good measure.

If there was some soul searching done prior to Game 2, the Maple Leafs found the answers that they were looking for. They outworked, outskated, outshot, and outscored Columbus and looked like a totally different team from the first game. They fired 38 shots on Korpisalo and dominated most of the play in the first period to set the tone. The Blue Jackets just never had an answer and only mustered 20 shots of their own.

The Blue Jackets were also the walking wounded in Game 2. Zach Werenski’s wrist area had been taped up early in the first period and defenseman Dean Kukan left after just 12 shifts following a hit to the head and neck region that ended his night early. The Jackets ran with a short bench the rest of the way, which caused Werenski and Jones to play over 28 minutes each. A quick transition play by Auston Matthews trapped Werenski deep in the offensive zone and led to the first Toronto goal.

Game 2 was only a game because of the play of Korpisalo, who had several big stops in the first period and a few in the second before the Matthews goal. Frederik Andersen was barely tested and his shutout was a testament to his focus and the focus of his teammates in protecting the front of the net. He went long stretches of the game without facing any shots.

The Blue Jackets weren’t the only team to lose a player to injury. Jake Muzzin took a header in the corner and was stretchered off the ice as a precaution. Because of quarantine rules, Muzzin, who was evaluated and released, will not be in the lineup for Game 2. It is a big loss for the Maple Leafs, who were suspect in their own end all season long and Muzzin was one of the big ice time guys on the back end. It will mean enhanced ice time for Morgan Rielly, who tied with Jones and Werenski in shifts with 31.

Muzzin is also one of Toronto’s top penalty killing defensemen. Special teams are always magnified in these playoff settings, but that is especially true here. The Blue Jackets are a hard-working, opportunistic offense, but their inability to carry the play at all 5-v-5 in Game 2 was a concerning sign. Game 1 was a back-and-forth, up-and-down type of game, but Columbus was much better at even strength in that one.

The two games in this series have been quite different, but one constant has been Korpisalo. There was some question as to whether or not the Jackets would give Korpi the first crack or use Elvis Merzlikins, who played well in Korpisalo’s absence due to a lower-body injury. To this point, it looks like the right call was made by head coach John Tortorella.

The Blue Jackets are a scrappy underdog squad to say the least. They’ll get the last line change now serving as the “home team” in Toronto with the 2-2-1 format. That should allow them to match up better with Matthews and his linemates and could very well give them a chance to expose Toronto’s loss of Muzzin for at least Game 3.

Tortorella was very critical of his team’s Game 2 effort and it did look like they were skating in quicksand compared to their opponents. We’ll see if they can change it up for Game 3, but it does look like the value side is Columbus with the +135 price.

CATCH COLUMBUS AT +135 AT BETDSI SPORTSBOOK!