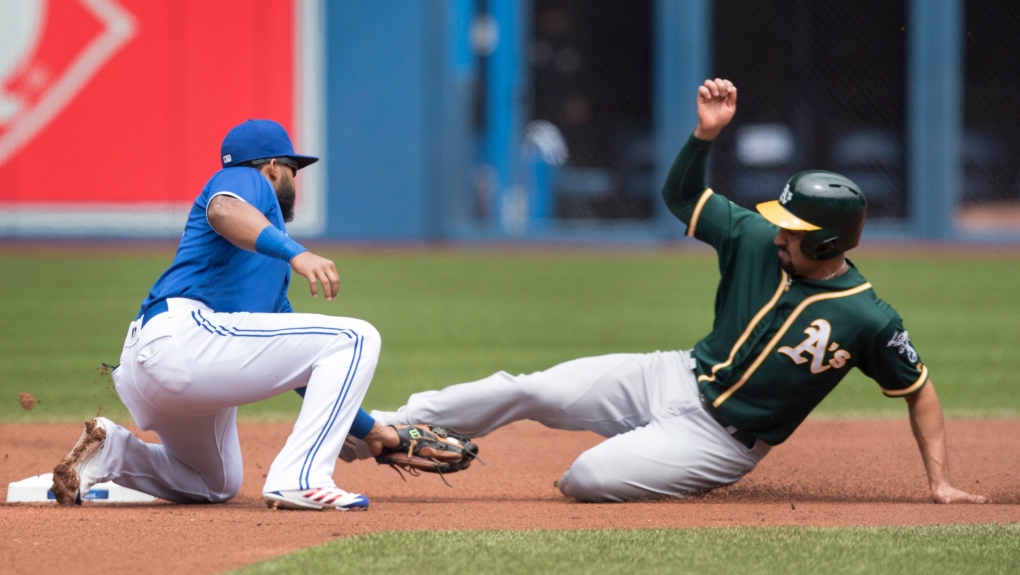 It seems a little bit ironic to say that the Toronto Blue Jays are taking their show on the road. Their entire season is a road show because of COVID-19 and the harsh protocols north of the border. They’re playing as the Dunedin Blue Jays for now and could very well become the Buffalo Blue Jays down the line.

But, everybody still refers to them as the Toronto Blue Jays and they’ll be out west at Oakland Coliseum to take on the Oakland Athletics. The A’s are a favorite in the -122 range at BetUS Sportsbook with a total of 8.5 in this series opener. It will be Steven Matz for the Jays and Frankie Montas for the A’s.

Let’s dig into the matchup and find a free pick for Jays vs. A’s.

Steven Matz allowed six runs in his first four starts of the season. He allowed six runs in his fifth start of the season. Matz gave up six runs on eight hits to the Washington Nationals, a team that has a pretty good book on him from his days with the New York Mets. The BABIP gods found Matz in that one, as he allowed eight hits over just 3.2 innings of work.

Matz has 27 strikeouts in his 27 innings this season, so he’s thrown the ball really well for the Jays. He’s thrown the ball well against teams that haven’t seen him a lot. There are some people out there that subscribe to the Unfamiliar Lefty angle, wherein a team facing a lefty that they don’t usually see will have some issues in that matchup. Perhaps that is what happened to the Rangers, Angels, Royals, and Rays.

We’ll see if it happens to Oakland. We’ve seen a bit of line movement and investment in the A’s here, which is a trend that we saw basically all of the time against left-handed pitchers over the last few seasons.

The Toronto lineup is one that has had to adjust to the new baseball. The Jays were one of several teams actively working to increase their launch angles on batted balls, especially with a crop of good, young hitters graduating to the Majors. Then MLB decided to change the baseball and throw a wrench in a lot of those plans. Furthermore, the Jays are now in a new park in Dunedin, where they’ve played Spring Training games, but not regular season matchups.

At present, the Jays lineup grades a little bit better than league average with the park adjustments at TD Ballpark included in the calculation. It wouldn’t be surprising to see the Jays improve in a lot of offensive categories as we go forward because George Springer is back at the top of the lineup and his presence will set the table for a lot of things.

The A’s have had quite a season so far. They started off as one of the worst teams in baseball over the first week of the year and then racked up 13 wins in a row to vault to the top of the AL West standings. While Oakland grades just slightly above the bottom third of the league in wOBA, the park adjustment puts their offense right around where Toronto’s is.

Frankie Montas is a guy that has needed all of the run support he can get thus far, at least in two of his starts. Montas has allowed 17 runs on 30 hits in 24.2 innings of work, but 13 of those runs came in starts against the Dodgers and Twins. He’s had three quality starts of six innings with four total runs allowed and then those two clunkers.

The long ball has been his primary problem with six of those to this point, including three in the game against Minnesota that was at home at Oakland Coliseum, which is usually a very good pitcher’s park. Montas has struck out over a batter per inning, so the stuff has been good, but the command has been hit or miss.

This is an interesting offensive matchup in that the Blue Jays have done quite well with right-handed pitching and the A’s have fared better against lefties than righties to this point in the season. They’re hovering right around the top 10 in SLG against lefties, which is important because this isn’t a lineup that gets a lot of hits, but does have 35 home runs on the season.

Oakland’s bullpen has not been as strong as ones we’ve seen in the past, due in large part to low strikeout rates relative to the league averages. You always want to factor bullpens into the handicap. By FIP, Toronto’s has been slightly better, but has a much lower ERA with better fortunes in the LOB% department.

This is a good matchup on Monday night. Matz and Montas are two guys that do have some upside, but also have some blow-up potential. The bullpens are pretty even by the advanced metrics. One thing I do like to consider is how hard it is to go play in Oakland. Teams make that long trip and go play games with the poor facilities by the bay. The A’s often have great success against AL East teams making the cross-country trek.

That is part of the reason I like Oakland, but there are others here, including my low level of belief in the sustainability of what Matz has done so far this season. He’s done much better in the contact management department, but his command profile has never been that great.