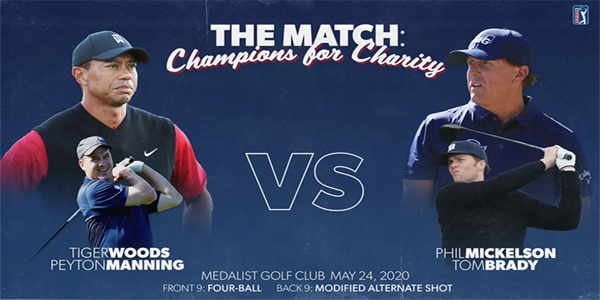 The Match II has a much different feel to it. Tiger Woods and Phil Mickelson will once again go head-to-head, but it won’t be on pay-per-view, they will have teammates, and it will be for charity.

The Champions for Charity match will take place at Medalist Golf Club in Hobe Beach, Florida on Sunday May 24 with a 3 p.m. tee-off time. Tiger will be partnered with Peyton Manning and Phil will be partnered with Tom Brady. The first nine holes will be played as a four-ball event and the back nine will be played as a modified alternate shot. Coverage will be on TNT, TBS, truTV, and HLN, so it’s like the March Madness that COVID-19 took from us. For nostalgia’s sake, you should watch on truTV just so you are forced to find whatever channel number that is.

The front nine will be four-ball, so best ball, and the lowest score on the team will win the hole. On the back nine, the modified alternate shot will mean that the teams will pick the best drive of the two and then go alternate shot until the ball is in the hole.

Manning is said to be a 6 handicap and Brady is said to be an 8 handicap, which is one of the reasons why Tiger and Peyton are -185 and Phil and Tom are +155 per the odds at 5Dimes Sportsbook.

A whole bunch of different prop bets are available for this match and we’ll get to those in a little bit. First, we need to examine the course. Seminole Golf Club seemed to play much harder than the players expected this past weekend in the TaylorMade Driving Relief and the course put on a good show for potentially getting a PGA Tour event down the line. As it is, the Walker Cup will be there next year.

As far as Medalist Golf Club, this is a Greg Norman and Pete Dye design that opened in 1995. Back in 2015, Medalist added “Tiger Tees”, which were well behind the tips. In fact, that lengthened the course to 7,515 yards. This is a course that is extremely popular among PGA Tour players that use the course to get into form between events or during downtime within the season. It has to be pretty challenging based on that.

This is Tiger’s home course, which is certainly gives him an advantage. It also helps that Manning seems to be a better golfer than Brady. Over the front nine, it would be fairly shocking if the pros’ scores aren’t used on at least eight of the nine holes. The alternate shot format on the back nine is when things get really tricky. That is where Manning’s better skill set could be the deciding factor.

On the prop betting side, there are some interesting options. Woods & Manning are -160 at 5Dimes to lead after 9 holes with Mickelson & Brady at +120. Woods and Manning could very well have the lead, but the first nine holes are really Tiger vs. Phil. Guessing about the form of these two guys after a long layoff is challenging, but Phil +120 here isn’t a bad grab. The risk would be for Peyton to bail Tiger out because Brady probably won’t do that for Lefty. I’d still take that risk.

Peyton Manning over/under 1.5 commercials is +140 to the over and -180 to the under at BetOnline Sportsbook. Peyton is a pretty popular guy and has a strong sales pitch, so there might be some value to the over here. It wouldn’t be a big stunner to see a new Peyton Manning commercial make an appearance while he has center stage here.

Be careful here because this one is up to the book manager’s discretion. Something like a charitable pitch to drum up more money for COVID relief may not count, so you’ll have to keep that in mind.

Will “Omaha” be said by any player is +225 Yes and -350 No. I have to say, I think Tom Brady might just be lame enough to make an Omaha joke. Or Phil Mickelson could pull out a dad joke on a bad drive and say that Peyton hit it towards Omaha. This would be a pizza money kind of bet, but it seems like it has a decent chance of coming through.

Finally, one other prop bet of interest. Will Tiger Woods wear red? Yes is -560 at 5Dimes and No is +370. It’s Sunday. Tiger’s wearing red. Ship it. Chalky with a low limit, but it’s good enough for lunch from a fast food joint or something.

The Match: Champions for Charity will be on TNT, TBS, truTV, and HLN with Justin Thomas and Charles Barkley as part of the commentary on Sunday May 24.