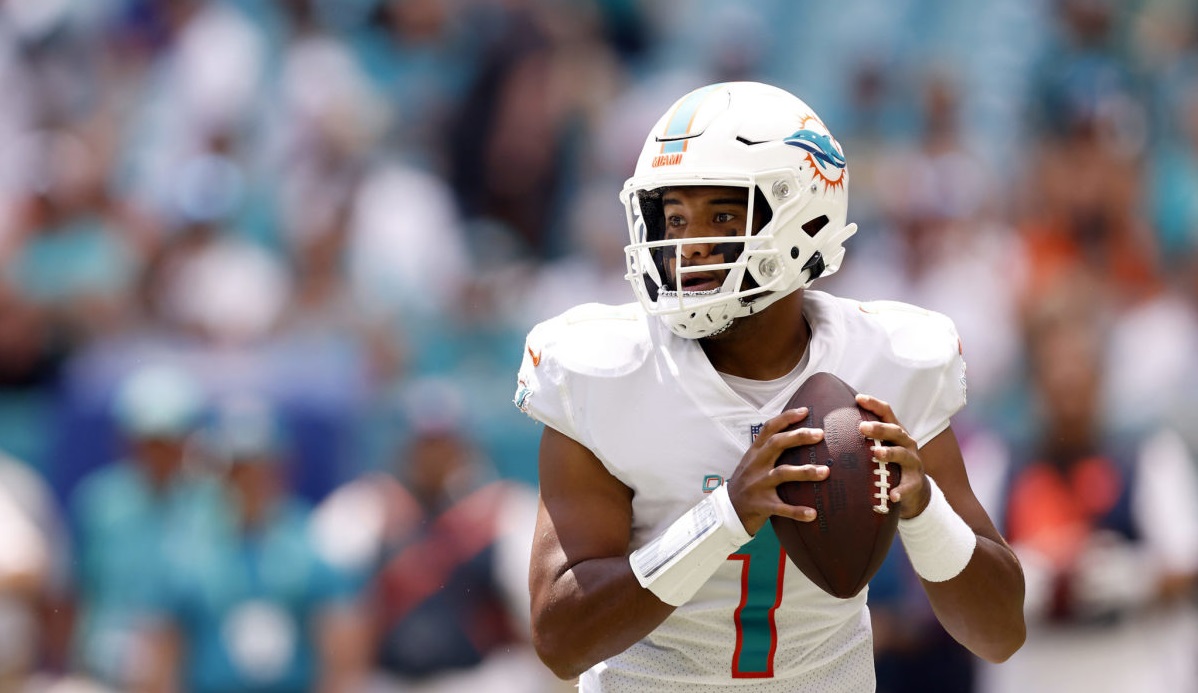 Tua Tagovailoa has been a controversial figure, to say the least, since he was drafted by the Miami Dolphins. There are several reasons for that, one of which is that he came in with a history of injuries. The Dolphins didn’t have to “Tank for Tua.” Not all the way anyway, as he drifted out of his projection as the top pick.

He has also been criticized for his lack of size, lack of arm, lack of leadership. Well, we know that the former coach, Brian Flores, remarked to management that he didn’t “study” enough, and that the team should seek a trade for DeShaun Watson. And when new coach Mike McDaniel came in, there were rumors that perhaps the Dolphins might seek a trade for Jimmy Garoppolo, who played for McDaniel in his previous position as offensive coordinator of the San Francisco 49ers and was, by all accounts, available.

But McDaniel chose to build an offensive scheme that highlighted Tua’s talents and worked around his limitations. With 469 yards against Baltimore two weeks ago, there seemed to be some vindication. Not only did Tagovailoa connect with receivers like Jaylen Waddle and Tyreek Hill on short routes where they took the ball and ran with it, he also went long to those guys, and the results were such that the Dolphins came back from a three-touchdown deficit to beat the Ravens.

Those are obviously the best weapons Tua has at his disposal – Hill and Waddle – as he moves into this Thursday night game that is televised by Amazon Prime Video as part of their package deal with the NFL. In the NFL props odds that have been posted at BetOnline on this game, here are Tua’s numbers on passing yards:

Last Sunday was not a big outing for Tua. He completed just 13 of 18 for 186 yards against the Buffalo Bills. What complicated matters is that he went out with an injury with 2:26 left in the first half. He later described it as the aggravation of a back injury, although the NFL Players Association wanted that to be investigated, because they saw it as more of a head injury and felt that the Dolphins’ staff didn’t handle it properly. Currently Tua is listed as “questionable,” but of course that means he’ll make the start. But will he be just one hit away from having to leave?

We admired Tua a great deal last season for his ability to make decisions quickly and get rid of the ball, as he was handicapped by a horrible offensive line. And he proved to be one of the more accurate passers in the league. This season he is hitting 71.3% of his passes, but the difference between this year and last year is that his receivers are getting more separation, where they were last in the NFL in that stat in 2021.

Only 13.1% of Tua’s attempts have been categorized as “bad throws,” and he is fourth best in the league when it comes to being “On Target.” He leads the league in both attempts and yards on play-action passes.

And that’s interesting, because the ground game, which was McDaniel’s pride and joy in San Francisco, hasn’t fully materialized yet. The Dolphins are next to last in the NFL at 3.3 yards per carry. And the lack of success in that area might be expected to funnel that into more passing attempts.

Buffalo’s defense leads the league in yards allowed per drive. But they were missing their whole secondary last week with injuries. So it’s hard to get a read on that. Cincinnati is fifth best in yards allowed on a per-drive basis, but they haven’t been challenged with the kind of receivers they will face on Thursday night.

In the early going, Miami is throwing the ball almost 65% of the time, which means that in his game plan, McDaniel does not mind abandoning the ground attack if that’s where the flow of the game takes him. And even though they have Raheem Mostert and Chase Edmonds on hand, no one has really, uh, taken the ball and run with it. So despite not having a long history of topping this figure, the likely game conditions nudge us toward the OVER on this prop.

Enjoy great props action at BetOnline through Prop Builder, where you can find dozens and dozens and dozens of angles to wager on Thursday night’s action…….. And if that’s not enough, you’ve got Odds Boosters (with explosive parlay payouts) as well as the “Live Betting” apparatus……. And no matter what kind of cryptocurrency you’re holding, there’s a high likelihood that you’ll be able to use it to open up an account!