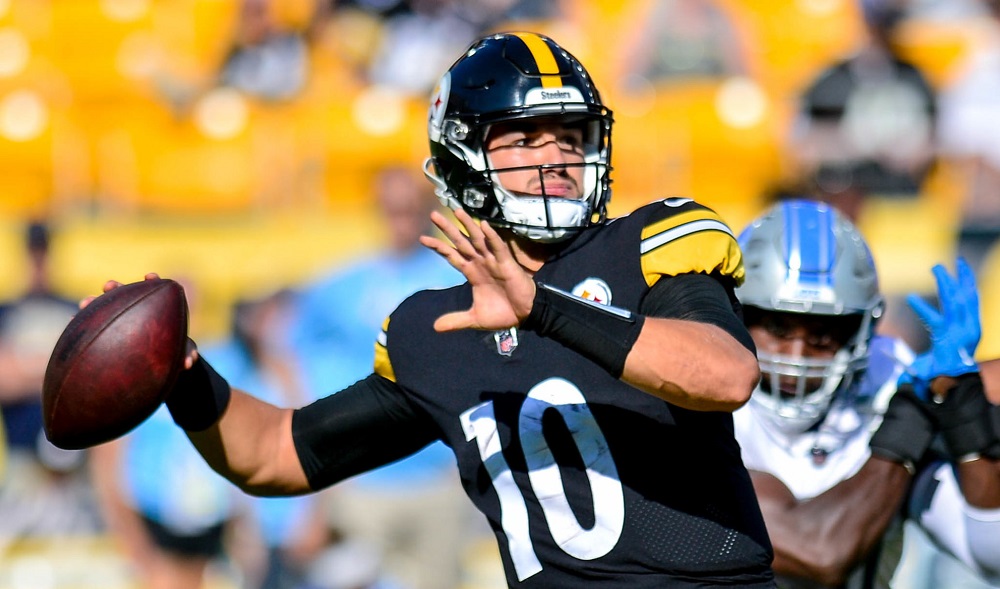 The Pittsburgh Steelers officially have a quarterback controversy. Yeah, already.

Will they add to it after Thursday night’s game against the Cleveland Browns?

In the Amazon-televised contest at FirstEnergy Stadium, the Browns are favored over the Steelers:

In the wake of the retirement of Ben Roethlisberger, Pittsburgh was faced with some choices. Not all of them were good. Mason Rudolph had been the backup, but he didn’t really have “starter” written all over him. Mitch Trubisky had once been the #2 selection in the draft, but kind of fizzled out in Chicago and then revived his reputation as a backup in Buffalo. With a first-round draft pick, the Steelers took Kenny Pickett, who played his college ball at Pitt.

Trubisky got the early nod, but he hasn’t busted any doors down with his results as of yet. The North Carolina product has led his team to 501 yards and 28 first downs in two games, and when you throw for just five yards an attempt, as he did against New England last Sunday, that’s not inspiring.

But he’s a veteran, and head coach Mike Tomlin probably feels that if he went with Pickett, that might be a signal of “rebuilding.”

Furthermore, he doesn’t sound like a guy who is completely unsold on Trubisky. He is impressed with some of the ways he’s handled the position, and as he told the Pittsburgh Tribune-Review, it involves “the leadership things, the communication things, detailing and communicating the offense, working hard to execute our agenda, the things that we want to work on.”

So maybe Tomlin won’t have a quick hook.

After a rough first season with the Bears, Trubisky showed signs of a big leap in 2018 when he threw for 24 touchdowns and just 12 interceptions, making the Pro Bowl. In the two seasons after that, his numbers were not horrible, but there appeared to be a dip in his confidence level. When Matt Nagy came in as the head coach, he was somewhat hesitant to let him really air it out. But we should mention that even though he had a career-high of 8.6 air yards an attempt in 2018, and it dropped after that, it wasn’t necessarily a precipitous drop. Since then he’s been around the 7.8 or 7.9 mark. There have been a lot of NFL quarterbacks who have been more of the “pitty-pat” variety than that.

The Steelers were sold on some high praise Trubisky received from the Buffalo Bills coaching staff, although he didn’t spend an awful lot of time on the field as Josh Allen’s backup.

And to be perfectly honest, Ben Roethlisberger didn’t exactly light up the stat sheet for the Steelers last year, with his 6.2 yards per attempt and his 86.8 quarterback rating. Yet Pittsburgh did have enough in the other areas to put together a 9-7-1 record and win a wild card spot.

Pickett threw for 4,319 yards and 42 TDs with only seven interceptions at the University of Pittsburgh last season. In the process he was not only the ACC Athlete of the Year but also finished third in the Heisman Trophy voting.

So you can understand why fans want to see him get a chance to lead an offense that has, thus far, been a little flat.

Roethlisberger is not necessarily a critic, but he’d like to see something different from offensive coordinator Matt Canada.

It’s interesting that when Trubisky was in Chicago along with Nick Foles, they spoke quite a bit about how the play calls (in this case, from coordinator Bill Lazor) made them practically impossible to execute.

It may yet take more of a meltdown for Pickett to get his opportunity. But keep in mind that Tomlin is not one of those guys who’s in this business to play for the future. And that will impact what he ultimately does.

For now, we’ll look for a low-scoring game from both sides, as Trubisky finds himself under siege from Cleveland’s pass rush. We’re going UNDER on the passing yards.

BetOnline offers customers a chance to wager on this game from many angles with Prop Builder. Bet on player totals, player vs, player and game props…… Also, if you want to be in action the whole way, go the “Live Betting” route……. It’s easy to open your account because you can use your credit card as well as any kind of cryptocurrency imaginable, including Bitcoin!