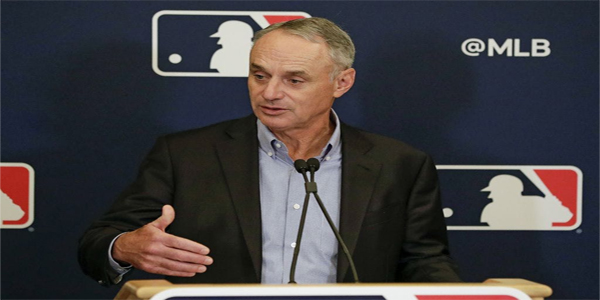 Major League Baseball is scheduled to return. The operative word is “scheduled”. Who knows what happens between now and July 23 or 24. Who knows how many positive cases pop up among the teams while they are in camp. Who knows how camp is structured. There are so many unknowns right now.

Ultimately, MLB had to figure out a plan to play something. With a labor stoppage looming and tons of money at stake from TV deals and the like, dollars were inevitably going to be the deciding factor. The MLBPA and the players adopted their “When and Where” mantra  to skirt any responsibility if things go off the rails (and have potential bargaining power for the CBA talks) and to stop the embarrassment that negotiations had become. The players also couldn’t go 1.5 years without getting paid if next season is lost to a labor stoppage.

The biggest element in this whole equation is the schedule. In order to minimize travel as much as possible, MLB has put together a 60-game schedule with 40 games against division opponents and 20 games of interleague play against the same division in the other league. That means the AL East will play the NL East, the AL Central will play the NL Central, and the AL West will play the NL West. Six games will be against the teams “interleague rival”, so Mets/Yankees, Indians/Reds, Dodgers/Angels, Cubs/White Sox, Nationals/Orioles, etc.

The Indians and Twins will only play four opponents that had a winning record last season. Each other, the Cubs, Cardinals, and Brewers. The East and West kind of get screwed in this scenario. The East does luck out in that all games on the schedule will be played in the Eastern Time Zone, but the AL East and NL East are two of the best divisions in the league. Only the Orioles and Marlins are completely awful.

Nobody quite knows how the games will be scheduled. Playing 10 games against each division opponent conceivably means five at home and five on the road. How long will road trips be? There are a lot of logistics yet to come together with this plan, but we should get more intel in the coming days. I’m a little surprised that the teams won’t play all five at once. They’re going to be three and two-game series.

Both leagues will have the DH, which is a welcomed change in my eyes, though your view may vary. Beginning in the 10th inning, teams will start with a runner on second.

With that, let’s look at the updated World Series odds from BetOnline Sportsbook to get a frame of reference:

I’ll start by saying this. There is no reason whatsoever to bet any World Series futures until like a day or two before the season starts. At the earliest. We have no idea which teams will get through the lead-up to the season unscathed. Whether it happens by COVID or just a regular baseball injury, some teams may be missing immensely key players for the entire season. Could you imagine holding Angels +3000 if Mike Trout gets hurt?

An oblique injury typically takes away a month and a half, just as one example. COVID would take away at least 14 days from a player. Of course the chances of it spreading to other players would be high, which could lead to multiple starters out of the lineup or rotation.

There are ton of reasons why betting futures would be extremely scary.

If you want to bet them, however, here are my thoughts:

The AL East has the lowly Orioles and the NL East has the lowly Marlins, though the Marlins have an underrated pitching staff and could be one of the more dangerous bottom-feeders in this structure. The AL West has the Angels and the Mariners that lost 90 games apiece. The NL West has the Rockies and Padres that each lost 90, but have a lot of individual talent for a short sprint. The NL Central has the bottom-feeding Pirates, but the Reds were expected to improve and the other three teams are solid.

The Indians and Twins are the greatest benefactors of this schedule. The Dodgers are fortunate in that they won’t have to play teams like the Braves and Nationals and they went 51-25 against NL West opponents last season. The Astros were actually 56-21 against their division foes. We could argue that those two teams also benefit greatly, though their divisions are expected to be stronger.

2. Look at Long Shots – The Dodgers and Yankees are overwhelming favorites, but in a shortened season, variance reigns supreme. The Marlins won 57 games last season. They were 21-19 over 40 games from May 17-June 29. Remember the WORLD SERIES WINNING Washington Nationals? They were 19-31 over their first 50 games. The Mets were 36-46 from April 1 to June 30 and 48-29 from July 1 through the end of the regular season.

Crazy things can happen in smaller sample sizes, especially with the injuries and COVID cases sure to pop up. Like I said, an oblique wipes out most of the season. A broken bone on a hit-by-pitch marks the end of the season.

A 60-game season brings teams into the mix that wouldn’t have had a great chance otherwise. Teams like the Toronto Blue Jays, who are bursting with young talent. Teams like the high-variance San Diego Padres, who could have been a Wild Card, but would not have run down the Los Angeles Dodgers for the division. Similarly, a team like the Arizona Diamondbacks.

Maybe now, instead of a one-game Wild Card playoff, those teams can get themselves into a guaranteed five-game series.

3. Pitching Depth – The schedule and the prices are what they are and they will be major factors. As far as team-specific things to consider, I’m looking at pitching depth. This 60-game format should, at least in theory, help the best bullpens. The teams that are going to win the games that they should and those that have multiple relievers that they can turn to.

My expectation would be that starters do not pitch very deep into games. Think about March, April, and May. Pitchers are usually going around five innings, with some maybe going six. Pitch counts are lower. Few guys get into the 100s, at least in their first 2-4 starts. Pitchers, assuming they go every fifth day, will make 11-12 starts in this format. For the first several of those, they will be trying to build up arm strength.

That means bullpens will be called upon to get lots of outs. We could even see teams go with four-man rotations and piggybacks. Openers could be quite prevalent. Those things require bullpen depth. To me, this favors teams like the Rays and Padres, who are my top two bullpens in baseball going into the season. The Dodgers, Athletics, Twins, and Yankees also benefit from this.

In conclusion, like I said, there is no reason to dive headfirst into futures. This is going to be a long month getting ready for the season with positive tests and injuries. You could play some long-shot, triple-digit futures and hope that those teams stay healthy, as any injuries or illnesses to the teams they are chasing could increase their chances and also cut down on the odds, but it is a wait-and-see game right now.