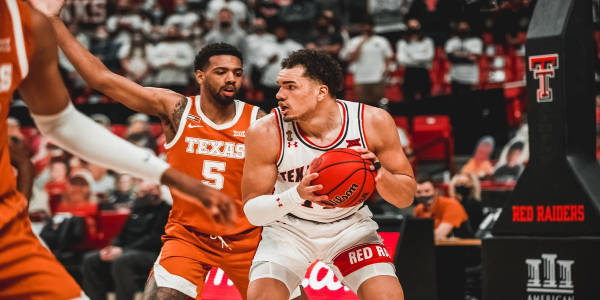 The Big 12 Conference Tournament is always a fun one in Kansas City and we’ve got a big game on Thursday night at the T-Mobile Center between Texas Tech and Texas. Seed lines determine the draw and may end up helping or hurting a team in that regard, but they don’t mean that a team will be favored because they are the higher seed.

This game is a great example of that point. Texas Tech is the 1.5-point favorite here as the #6 seed against the #3 seed. Texas has had a fine season and wound up with a better record than the Red Raiders in league action, but the Longhorns still have to pull a mild upset to advance and face the winner of the Oklahoma vs. Kansas game.

With Texas Tech -1.5, we see the total at 135.5 at Bovada Sportsbook, which seems a touch high given how the Red Raiders win most of their games.

Chris Beard is one of the best coaches in the country. Maybe that has something to do with the respect that Texas Tech has gotten in this overnight line. The two regular season meetings between these teams could not have been more different. Texas Tech won both, but won the first game 79-77 and the second game 68-59. The first game was played to 70 possessions and the second game just 65.

One would think, given what we know about Texas Tech, the Red Raiders would much prefer a game that plays out more like the second one than the first one. This is a Tech team that is 60th in eFG% defense and just 184th in eFG% on offense. While the Red Raiders don’t make a lot of shots, the boys from Lubbock do attack the offensive glass well and take excellent care of the basketball.

In fact, that TO% disparity is a big reason why Texas Tech was able to overcome some of the shooting woes. The Red Raiders had a 16.1% TO% on offense and a 23.5% TO% on defense. Those extra possessions come in real handy when you have to manage with a low-percentage team from the floor. Texas Tech is outside the top 200 in 2P% and outside the top 120 in 3P%.

But, it’s about the defense. It was for Beard at Little Rock and it still is here. Really, outside of Jarrett Culver and the team that made a deep NCAA Tournament run to the Finals in 2019, this has not been a great offensive team most years. This year’s version is even worse than most.

Taking all of that into consideration, what does that say about the Longhorns? It suggests that Texas has some major problems as well and those have been very much evident at times throughout the season, along with the two games against Texas Tech. Texas turns the ball over a lot. Despite being led by Shaka Smart, who was famous for the havoc defense and the VCU press when he was in Richmond, this year’s men of Austin have not forced a lot of takeaways.

In fact, Texas is in the negative in TO% margin with a TO% on offense of 19.7% and a TO% on defense of just 17.8%. That is one key difference between these two teams. The other is that Texas actually does shoot the ball pretty well all things considered. The Longhorns are indeed inside the top 100 in both 2P% and 3P%.

That is the case while still being a quality defensive team that has held opponents to just 45.3% on two-point shots. Their 32.1% 3P% against also ranks in the top 100 nationally. It is entirely possible that Texas Tech is just Texas’s kryptonite. In the other losses, Texas fell by four to Villanova, one to Oklahoma, 14 to Baylor, eight in double overtime to Oklahoma State, and by two to West VIrginia. Several of those games could have gone either way.

Of course, Texas also has eight wins by six or fewer points, so they’ve come out on top in their fair share of close games as well.

This is such a tough handicap. Based on what we saw in the regular season, Texas Tech’s floor is lower. They’ve had some outright poor performances and ugly losses. Most of Texas’s losses came in close games. On the other hand, Texas Tech is a more trustworthy team and many would argue the team with the higher upside between the two.

It may simply be the advantage of Beard, whose Red Raiders won both regular season meetings with strong offensive efforts in both. It’s not like Texas Tech has had a ton of banner offensive performances, but the two games against Texas were solid.

Since Beard took over in Lubbock, Texas Tech is 8-4 straight up against Texas. They basically just need to win to cover this spread, unless the game falls on one. I think they’re the right side here, as they seem to have cracked the Shaka code.