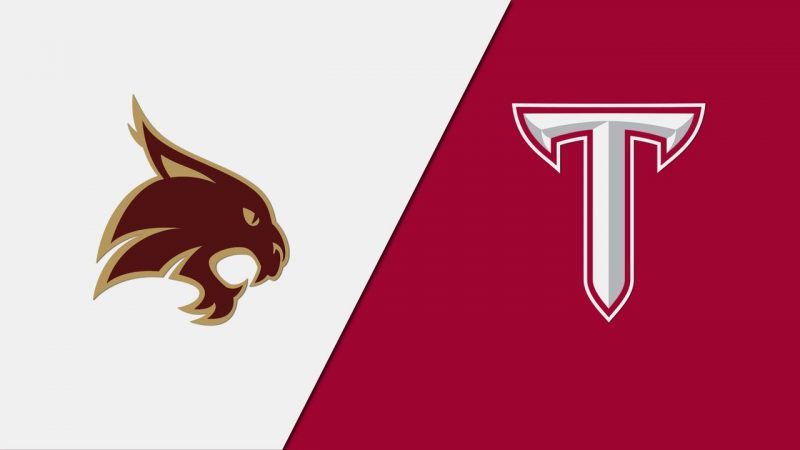 The 2021-22 Sun Belt Conference regular season wraps up Friday, February 25, so we are taking a closer look at the Bobcats vs. Trojans showdown from Trojan Arena in Troy, Alabama, to get you the best Texas State vs. Troy betting pick and odds.

These two schools meet for the second time this season, and the Trojans search for their third consecutive victory over the Bobcats. According to MyBookie Sportsbook, Troy is a small 1.5-point home underdog with a total of 128.5 points.

The Texas State Bobcats (20-6; 12-11 ATS) clinched the 2022 regular-season Sun Belt title this past Wednesday. They outlasted South Alabama 55-52 as 3-point road dogs, recording their eighth straight victory. Also, the Bobcats covered the spread for the sixth outing in a row.

The Troy Trojans (19-9; 16-10 ATS) are coming off a 59-53 victory to the UT Arlington Mavericks this past Wednesday. It was their second win in the last four outings, as the Trojans covered a 4.5-point spread at home and clinched the top-four seed in the Sun Belt Conference.

Troy nearly blew a double-digit second-half lead. The Trojans’ defense stepped up in crunch time and held the Mavericks to a paltry five points through the final five minutes. Troy committed a whopping 22 turnovers, but the Trojans also outrebounded the Mavericks 46-24, posting 16 offensive boards.

The Bobcats have already clinched the regular-season crown, so their focus should be on the championship tournament. Texas State leans on a bunch of seniors, and the Bobcats should consider resting some of their key players.

On the other side, the Trojans certainly want to finish on a high note and clinch the No. 3 seed in the conference, at least. Should they defeat the Bobcats and App State loses at Arkansas State, the Trojans will earn the No. 2 seed for the championship tournament. Troy has a lot to play for here, so I’m backing the hosts to cover. Back in December, the Trojans thrashed off the Bobcats 78-63 as 6-point road dogs, and Efe Odigie had 22 points on 10-for-14 shooting from the field.

The line has been set pretty low for a few reasons. The Trojans lean on their defense, allowing 99.6 points per 100 possessions (96th in the nation) on 40.9% shooting from the field (51st), so they have enough firepower to deal with the Bobcats’ solid offense.

On the other side, the Bobcats shoot the ball very well, but they average only 64.1 possessions per 40 minutes (337th). Three of their last four games have gone under the total, while the under is 9-4-1 in Troy’s previous 14 outings at any location.