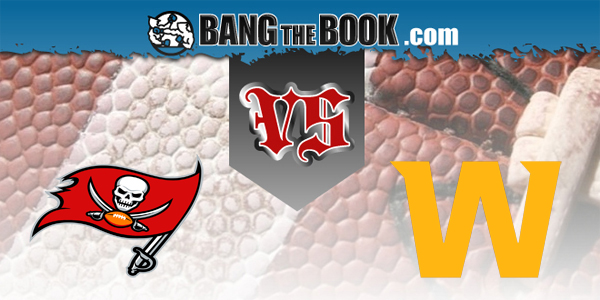 Narratives tend to shape the betting markets, especially in the NFL Playoffs. On one side, you’ve got a Tampa Bay Buccaneers team led by Tom Brady with elite skill position talent and a defense that was highly-rated earlier in the year. On the other side, you have a team with a losing record that won the worst division in football.

As a result, the Buccaneers are more than a touchdown favorite heading to Landover, MD for Saturday’s primetime Wild Card Weekend game against the Washington Football Team. The Bucs are -8.5 at Bovada Sportsbook with a total of 45.

This is the first time since 2011 that a road team has been a favorite of this magnitude in the playoffs. The last time it happened, the Seahawks beat the favored Saints outright at home. That game has no bearing on this one a decade later, except to illustrate that an upset is possible.

The Buccaneers had a late bye week. During this weird and unique COVID season, Tampa Bay had to play 12 straight games prior to a week off. With a 43-year-old quarterback and no preseason to work together, you can see why the Bucs were 7-5 at the break.

They went 4-0 after the bye, winning three of the four games by double digits. That 43-year-old turned the clock back by throwing 40 touchdown passes for just the second time in his career and put up numbers similar to his 2017 season with the Patriots. That one ended with a Super Bowl ring. For Tom Brady, this will be his first trip to the playoffs with a different team, but he’s having as good a season as he’s had in quite some time.

Over those last four games after the bye, Brady had a 12/1 TD/INT ratio with a 69.1% completion rate. He averaged 11.24 adjusted net yards per pass attempt. This Buccaneers offense is really clicking going into the postseason. The negative MRI for Mike Evans and the better health in the second half of the season for Chris Godwin are additional positives going into this game.

That being said, I would be remiss if I didn’t mention the Tampa defense. The Bucs still graded out fifth for the full season in DVOA and were the top rushing defense in the NFL, but opponents exceeded 350 yards in six of the last nine games and the defense looked suspect at times.

The Bucaneers defense did get better and make adjustments as games went along. Tampa Bay allowed 7.6 adjusted net yards per pass attempt in the first half and then 5.0 in the second half.

GET THE FULL LAS VEGAS EXPERIENCE AT BOVADA SPORTSBOOK

The Washington Football Team has had to rely on its defense all season long and that will be the case again in this one. The 1.69 points per drive that they allowed was third in the NFL, trailing only the Rams and the Steelers. Opponents only scored on 31.4% of their possessions. That was the fourth-best mark.

The goal for Washington will be to make Brady uncomfortable. Washington had 47 sacks while mostly generating pressure with just the front four off the edges. It allowed Washington to sit back in coverage and hold opposing QBs to a 62.4% completion rate. Only the Steelers and Saints fared better in that department.

Tampa Bay’s defense allowed a 69% completion rate, but limited big plays. Washington did an excellent job of limiting most plays. Opponents only had 4.8 adjusted net yards per pass attempt.

Tampa Bay’s defense was stout against the run, holding opponents to 3.6 yards per carry. That would seem to be a concern for a Washington team that ranked 14th in Rush DVOA while ranking 32nd in Pass DVOA. That pretty much puts it on the shoulders of Alex Smith, who is less than 100% and has eight interceptions against just six touchdown passes. He’s also been sacked 22 times in eight games.

This is a complex handicap. We have a true outlier situation in the sense that the Bucs are a huge road favorite, but they clearly deserve to be from a statistical standpoint. The only hope that Washington has here rests on its defense, which has really been the MO for this team all season long.

Washington is catching the Brady-led offense at a bad time with a ton of efficiency since the bye week and this could end up being a blowout. On the other hand, that Washington pass rush has been quite effective, led by Chase Young and Montez Sweat.

I’ll take the 8.5 with Washington here and give that defense the benefit of the doubt. Brady and the Bucs put up huge numbers on the Falcons twice, the Lions, and the Vikings, who Mike Zimmer said have the worst defense he’s ever seen. This Washington defense is a handful and they should be able to keep this one close.