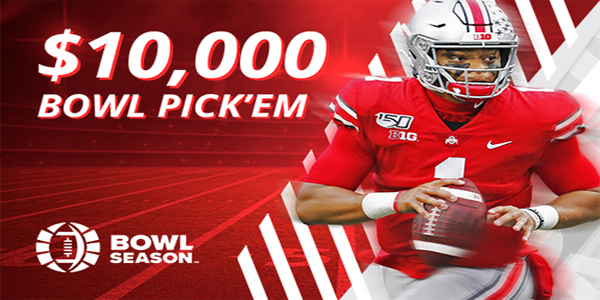 Not sure what to do during the college football bowl season? You are not alone. This year’s unique and challenging bowl season is unlike anything we have ever seen before with the potential with opt-outs, COVID outbreaks, and simply the deviations to the preparation period and schedules.

Fortunately, BetOnline Sportsbook is here to help with the $10,000 Bowl Pick ‘Em Contest. You don’t have to stress about doing a deep dive handicap into every game to ultimately realize that you don’t really have a strong opinion.

This is a free-to-enter Bowl Pick ‘Em contest, but there is a catch. You still have to bet $25 on each one of the listed bowl games in order to be eligible for the prizes. The bowl games for the contest begin on December 29 and run through the National Championship Game on January 11.

If you don’t have an account at BetOnline, now is the time to sign up. If you can do it in time, you can also participate in the $20,000 NBA Christmas Parlay contest on December 25.

– To qualify, you must bet $25 on each of the listed games; spread, money line, total, or live betting wagers count towards the requirement – NO PARLAYS

– Contest picks are locked at kickoff, but you cannot change the team you pick

– One point for each correct pick; half-point for a push

– A maximum of 18 points is available

– If a game is canceled/postponed, both teams are graded as a loser

– If fewer than 10 bowl games are played during the contest period, the contest will be canceled and no prizes will be awarded

The bowl games in question are:

You’ll have to bet $25 on each of those 18 games in order to qualify for the prizes.

At the end of the contest, the players with the most points will win prizes based on this chart:

To recap, the entry into the $10,000 Bowl Pick ‘Em is free, but you have to bet $25 on each game to be eligible for the prizes. Bowl games in question are from December 29 through the National Championship Game.

SIGN UP AT BETONLINE SPORTSBOOK FOR A 100% DEPOSIT MATCH BONUS