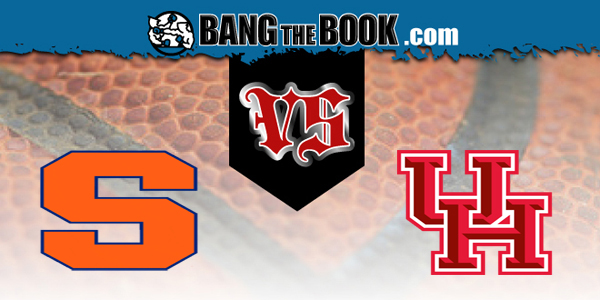 The calm before the NCAA Tournament storm meant that the betting odds for the Sweet 16 games could be up for several days before the games were actually played. Even though action wrapped around to Monday, the Sweet 16 is on Saturday and Sunday this year instead of Thursday and Friday.

With all week to sit and marinate, it has been interesting to follow the markets and see where the money is going and to have some idea of where it was coming from. Money has started to move the line for Saturday’s late game between Syracuse and Houston. The Cougars are up to -6.5 with a total of 140.5 at Bookmaker Sportsbook for the 9:55 p.m. ET tip-off.

Every year we doubt Jim Boeheim’s team in the NCAA Tournament. Every dang year. The Orange are always a bubble team it seems, yet they get in when people say that they shouldn’t and then they make a run. This year is no different, as the Orange find themselves in the Sweet 16 for the sixth time since 2010. Three of those times, they’ve gone to the Elite Eight.

Teams see the zone defense in the NCAA Tournament and it gives them fits. Syracuse was a pedestrian team in the regular season with an 18-9 record and a 9-7 mark in conference play, which doesn’t even include the loss to Virginia in the ACC Tournament. Syracuse blew out San Diego State and then eked past West Virginia in a throwback to the Big East Tournament days to get to this point.

How has Syracuse done it? Let’s start with the offense. The Orange are 29-of-58 from three in their last two games and 61-of-141 in their last five. They’ve been on some sort of tear from beyond the arc and it couldn’t have come at a better time. The Orange have also made 24 of their 41 two-point attempts as well, leading to 1.295 points per possession against San Diego State and 1.083 against WVU.

Defensively, teams have been stymied by the zone to a degree. West Virginia was just 15-of-44 on shots inside the arc and 11-of-26 on shots outside of it in that second round game. West Virginia took 70 shots to just 52 for the Orange. The Mountaineers pulled down 19 offensive rebounds, but were only 11-of-23 at the rim and just 4-of-21 in the midrange game per Bart Torvik.

In other words, Syracuse was pretty fortunate to come away with that win.

The offensive rebounding concerns are omnipresent for the Orange because of that zone defense. They either get outnumbered at the rim or big guys are able to establish their possessions to retrieve missed shots. It happens all the time with Syracuse and is an occupational hazard when playing the zone.

Well, for Houston, a team that ranks second in the nation in ORB% at 39.8%, they have to be champing at the bit to get out there and go up against the Syracuse zone for that very reason. Houston is not the most efficient of offensive teams in the paint or elsewhere, but plenty of second-chance opportunities will come the Cougars’ way in this one.

Houston is #1 in the nation in eFG% defense, holding opponents to just 29.3% from three and 42.9% from two over the course of the year against Division I competition. The Cougars did not play the greatest of schedules and the AAC certainly has some offensively-challenged teams, but Houston’s length is a really big deal and it has been showcased on both offense and defense.

That being said, the Cougars have had some stinkers. They lost to Tulsa, East Carolina, and Wichita State, three teams that were quite a bit worse than they are. They’ve had close calls against Memphis a couple of times. They even had a close call against Rutgers in the second round last weekend, even with a big offensive rebounding edge. Nothing is guaranteed in the month of March.

Nothing is guaranteed, but action is starting to leak in on Houston and I agree with that position. The Cougars stretch their defense out well, which should make it tough and challenging for Syracuse to get a lot of clean, easy looks on triple tries. Furthermore, Houston’s offensive rebounding percentage and ability to force turnovers should lead to a lot of extra possessions for the favorite here.

Syracuse won in spite of those things against West Virginia. I don’t see the outcome being the same here.