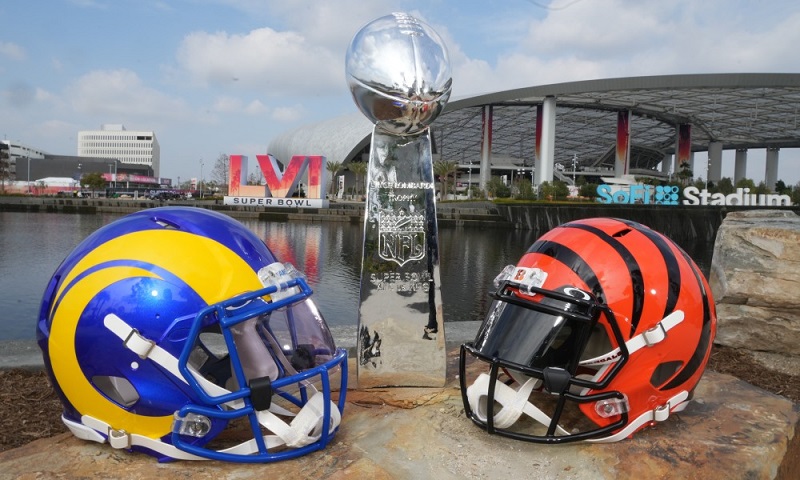 Hey – don’t forget about Odds Boosters, which offer greatly-enhanced payouts on pre-selected parlays, every day of the week!

You may find it rather odd that this is the first Super Bowl that involves opposing quarterbacks (Joe Burrow, Matthew Stafford) who were both #1 overall draft picks (since there’s neen a common draft anyway). Or that after 54 Super Bowls have been played, we finally have a situation where it’s being played in one team’s home stadium – and for the second year in a row, no less.

But here are some other things that are out of the ordinary:

* Joe Gibbs, the Hall of Fame coach, unquestionably beat the Super Bowl odds by winning the championship three times with three different Washington Redskins quarterbacks – Joe Theismann (XVII), Doug Williams (XXII) and Mark Rypien (XXVI), who incidentally was the first Canadian native to start at quarterback for an NFL team, and of course was the first Canadian to win a Super Bowl MVP. And yes, the Redskins covered all three of those games, once as a favorite and twice as a dog.

* Ron Widby of the Dallas Cowboys was the first player to punt the ball nine times in a Super Bowl (#5 against Baltimore). He was also the only Super Bowl competitor who ever played in the American Basketball Association. Widby had been drafted by both the New Orleans Buccaneers of the ABA and the Chicago Bulls of the NBA, and played 20 games for New Orleans in the 1967-68 ABA season. Wow! Go stump your friends with that one!

* The first player to both throw and catch a pass in the same Super Bowl was Sam Havrilak, the versatile Baltimore Colt who caught two passes and completed a pass for 25 yards in Super Bowl V against the Dallas Cowboys. Antwaan Randle-El was the first wide receiver to throw a TD pass in the Super Bowl, doing it in the fourth quarter of #40 to give Pittsburgh its final 21-10 margin over Seattle. What are the odds of someone doing that this Sunday?

* Percy Howard didn’t play varsity football at Prairie View A&M; he actually only played basketball. But he still caught on with the Dallas Cowboys – always looking for superior athletes – as a wide receiver in 1975. In Super Bowl X against Pittsburgh he caught a 34-yard touchdown pass from Roger Staubach, which made the final score 21-17. That turned out to be the only pass he ever caught in the NFL, and makes him one of the great oddities in Super Bowl lore.

* David Tyree of the New York Giants, famous for making the “Helmet Catch” off the arm of Eli Manning in Super Bowl XLII, would certainly beat some heavy Super Bowl odds if he ever did that again, because he has not made a reception in the National Football League since. Don’t fret for him, though; not only will he make highlight films for the rest of his life, he actually made All-Pro (as a special teams player) in 2005, and no one can take that away from him!

There’s nothing odd about BetOnline’s Super Bowl Props Predictor. In fact, it’s pretty easy to understand, as they give you the opportunity to win your share of $25,000 in prizes. All you have to do is get the props right…….. And when you seek out “Odds Boosters,” you can get greatly-enhanced payouts on pre-selected parlays on a daily basis……. These people make it very headache-free to open up an account – and they do so by offering every cryptocurrency option imaginable. Of course, that includes Bitcoin, so you can get in the action very quickly!