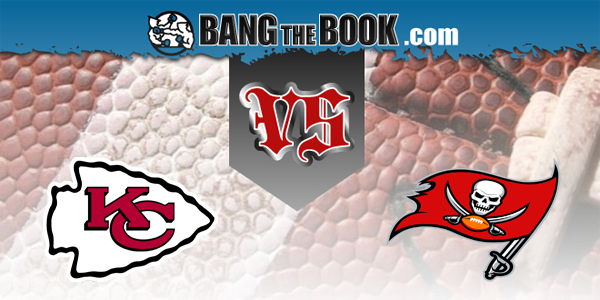 By the time SBLV kicks off, you’ll have Super Bowl fatigue. It’s a given. Every single matchup, every single angle about this game goes under the world’s largest microscope at some point. That isn’t a slight about the game or about the coverage. It’s simply that the last football game of the year gets a lot of scrutiny and a ton of attention.

It also gets a lot of scrutiny and a ton of attention from bettors and bookmakers. As a general rule, this is the sharpest line of the year. Actual bets and actual dollars shape the betting markets. Oddsmakers put up a number and the subsequent betting action makes the number what it is by smoothing out all of the rough edges.

This year’s line was particularly easy to set because these two teams just played in Week 12. Kansas City won the game 27-24 as a 3.5-point favorite. The total closed 56 and the box score suggests that there should been more than 51 points. The teams went 1-for-5 in the red zone and only scored 51 points despite 960 yards of offense.

So what happened here? The line went up as Kansas City -3.5 and the total went up at 57, shaded to the over a little bit because of the first box score and also the fact that sportsbooks will be flush with over cash on a game of this magnitude with two well-known quarterbacks and lots of public investment.

A week out from the game, the line sits at -3 and extra juice on Kansas City at BetOnline Sportsbook with a total of 56. This line moved a little bit initially in favor of Tampa Bay and in favor of the under when it first came out. It basically hasn’t moved much since early last Monday. And it likely won’t move much.

Information is everything in the bookmaking process. The risk managers know that 3.5 is a buy point for Tampa Bay money and 56.5 or 57 are buy points for some sharper under money while waiting for the deluge of recreational bettors to pop in on the game beginning Friday or Saturday. It took mere hours for the sportsbooks to know exactly how the betting action was going to go here.

The one interesting thing about the Super Bowl odds is that the money line is often a point of value on the favorite. A lot of recreational bettors, either looking for rooting interest or seeing recent underdog trends, will “bet a little to win a lot” whenever possible. That means taking the plus money price on the underdog money line to win outright. Generally speaking, you wind up with a money line on the favorite that is lower than it typically would be relative to the spread on the game.

We haven’t seen that yet in this one because the books haven’t had to move much in that regard, but we could see Kansas City maybe hit -160 or so by kickoff. You’d generally see -165 to -175 with a three-point favorite otherwise.

The Chiefs are the road team here. This marks the first Super Bowl in NFL history when the host venue is also the home stadium of one of the participants. The Los Angeles Rams played at the Rose Bowl in Super Bowl XIV and the San Francisco 49ers played at Stanford Stadium in Super Bowl XIX. Those two teams were the closest we had gotten up until this point.

Frankly, though, with limited attendance because of COVID and the astronomical ticket prices associated with low supply and moderate demand, it shouldn’t be that big of a deal for the Chiefs. Honestly, if the Chiefs offense plays like it did in Week 12, I’m not sure anything will matter.

Kansas City racked up 543 yards on 72 plays and basically took the fourth quarter off. Kansas City fumbled inside the 10 with a chance to go up 24-0 in the first half. On the first drive, Andy Reid opted to kick a 19-yard field goal instead of going for it on fourth down at the one-yard-line. It very easily could have been a 28-7 game at half instead of the 20-7 game that it was.

The Buccaneers kicked a field goal on the opening possession of the second half and the Chiefs marched downfield to take a 27-10 lead. They didn’t score again and only had 38 yards on the next three drives as Tampa Bay had two turnovers and a touchdown. At the end of the game, the Chiefs got three first downs and burned 4:10 off the clock to secure the 27-24 win.

After the 75-yard touchdown drive, the Chiefs had 71 yards on their final four drives. Before they stopped trying, Kansas City had 452 yards on 51 plays. That was a story for the Chiefs throughout most of the season. They took a lot of fourth quarters off, much to the chagrin of bettors. Kansas City was a terrible ATS team during the season, even though they won several box scores in lopsided fashion.

The 543 yards in the first Tampa Bay meeting were a season high for the Chiefs. They dominated that game, but didn’t cover. They did the same against Denver in Week 13 and the same against the Browns in the Divisional Round.

Patrick Mahomes missed a game because the Chiefs sat everybody in Week 17. He finished the regular season with a 38/6 TD/INT ratio and a 66.3% completion rate. He was only sacked 22 times, which will be a key in this game. The defensive line for the Buccaneers may be the only hope of stopping this juggernaut of an offense. Mahomes is one of the best quarterbacks from an escapability standpoint.

Nobody can match up with Travis Kelce and shut him down. If you try, Tyreek Hill will burn you. The numbers are really good for both guys. It would be overkill to list them. We all know it.

If there are flaws with the Chiefs, you’d point to the red zone defense first, which was the worst in the NFL in the regular season, allowing a touchdown 76.6% of the time. The other thing you would point to is the run defense. From a DVOA standpoint, the Chiefs rush defense was a bottom-five unit.

Can the Buccaneers exploit those two defensive weaknesses and make a real game of this thing? It sure is possible. The Bucs were seventh in TD% in the red zone with a bevy of weapons at the disposal of Tom Brady. You would think that with tighter windows and less zip on the fastball, Brady and the Bucs would have had some hiccups in the scoring areas, but they did quite well overall.

Brady wound up with a 40/12 TD/INT ratio for the season and completed 65.7% of his tosses. He’s had some ugly interceptions in the playoffs and has only completed 55% of his passes. He gave the Packers every chance imaginable to come back and win the NFC Championship Game, but the defense stood strong and the Packers had some drops and misfires.

Tampa Bay has won seven games in a row, including three games here in the postseason after only beating one playoff team (Green Bay) during the regular season. On the other hand, the Bucs trailed Atlanta big at halftime in Week 15 before turning things around. Minnesota left 10 points on the field in the kicking game in Week 14. The Lions quit in Week 16. The Falcons were no match in the rematch in Week 17 as they were playing out the string and the Buccaneers were vying for the fifth seed to get Washington in the first round.

Maybe some, possibly myself included, are being too hard on the Buccaneers. This was arguably the best run defense in the regular season. The Buccaneers had 25 takeaways in 16 games and have seven of them in three playoff games. Opponents only scored 1.89 points per drive against this Todd Bowles defense. The return of Vita Vea seemed to be a big help, even in limited action, as the Buccaneers sacked Aaron Rodgers five times and altered other throws with pressure.

The safety position is in the spotlight here for the home team. Both Antoine Winfield Jr. and Jordan Whitehead left the NFC Championship Game with injuries. They’ll be able to take full advantage of the extra week of preparation and likely play, but those are two huge injuries when talking about assignments with guys like Hill and Kelce.

Tampa Bay gets to the quarterback a lot. They had 48 sacks and 116 QB hits in the regular season. The concern here is that guys like Devin White, who was second on the team in sacks, might be needed more in a coverage or spy capacity. It will be interesting to see how Bowles, who excels as a defensive coordinator, plays it. The Bucs were third in Pressure% and fifth in Blitz% per Pro-Football-Reference during the regular season.

Offensively, the recent emergence of Leonard Fournette is a fascinating development. The play calling is what could be the separator and if there is too much Fournette from Byron Leftwich. The Buccaneers ran on first down 236 times for just 3.9 yards per carry. It was a big deal against the Packers, as they had very little early-down success, but converted a bunch of third downs to move the chains and score points.

On second down, the Bucs ran 105 times and passed 232 times. They only ran 26 times on third down and threw it 157 times. This is a very predictable play distribution for the Buccaneers. With two weeks to prep for the game, you know an elite planner like Steve Spagnuolo will focus on this quite a bit.

One data point out of 18 or 19 may not be the best indicator of future performance, but it is really hard to look at the first meeting and not assume Kansas City does the exact same thing. The Chiefs left points on the field in that first meeting the red zone fumble and two short field goals.

The Buccaneers sustained some drives, but scored two touchdowns on drives of 75 and 73 yards in the fourth quarter when the game was all but decided. Maybe things go differently now and the Bucs have played really well since that Week 12 game. It still seems like Kansas City is the team to beat here and the -3, even at extra juice, seems like the side to take.

I’ll wait on the total and see if 57 comes around. While these are two great offensive teams and the yardage totals in the first meeting were very high, Spagnuolo and Bowles should both have excellent game plans here. I wouldn’t be shocked if we see a lower-scoring game. The Chiefs have struggled to score early in games and this one could be playing catch-up on the total throughout.

GET A BIG SUPER BOWL DEPOSIT BONUS AT BETONLINE SPORTSBOOK