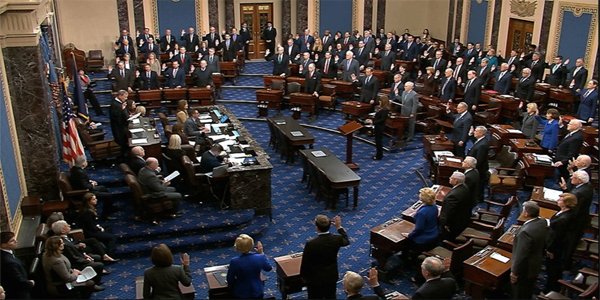 At BetOnline there are plenty of props to bet on for Super Bowl 55 (LV). And I think they would admit that some of these contain a little “gimmickry,” although it is all about fun in the end.

But one of them, which “crosses over” from one thing to another, makes you think, and if you are leaning in a certain direction, it might even offer you some value.

Let’s take a look at this:

WHICH WILL BE HIGHER?

Of course, the “Senate votes” being referred to are those that would involve the pending impeachment trial of former President Trump.

We can say with some certainty that the number that will be represented in the top part of the prop is a little less flexible than the bottom part.

We get a clue here by a recent vote that was taken in the United States Senate, in which the constitutionality of holding such a trial in the first place was being reviewed.

That vote came out 55-45 against Trump – that included the 50 Democrats, in addition to five Republicans who more or less turned against Trump. These were Susan Collins of Maine, Lisa Murkowski of Alaska, Mitt Romney of Utah, Ben Sasse of Nebraska and Pat Toomey of Pennsylvania.

We can conclude that if 45 of them don’t even think a trial is constitutional, they aren’t going to ultimately convict Trump. But we do allow for a couple more to reverse themselves. Who knows – maybe Mitch McConnell comes to mind. But don’t expect the floodgates to open.

So we can say with some confidence that we would be looking in the 55-57 range.

And that pretty much puts us right in the neighborhood of where the Super Bowl LV (55) total is posted at BetOnline.

Here are the odds on the game the last we looked:

So when it really comes down to it, you are placing a prop wager on whether this game is going over the total.

To use an electoral term, it is a “referendum” on where you think this total will land.

Now, understand that when you are laying the -140 price that the votes in the Senate will be the “winner,” you could actually win this with only 50; it would just depend on what happened with the game total.

But if you are wagering on the +100 price, you are almost certainly betting that this game will see more than 55 points scored.

And if you are doing that, you can actually get some real value through this prop.

Seriously – you are basically betting on the “over” at an even money price, rather than having to lay -116 on it if you were doing it is a “straight” wager.

That’s something you should take note of.