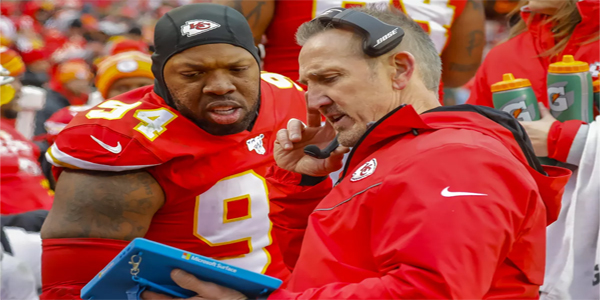 Super Bowl 55 Preview — KC’s Spagnuolo Thwarted Brady Before; Can He Do It Again?

A lot of BetOnline customers may point to the presence of Steve Spagnolo, the Kansas City Chiefs’ defensive coordinator, as something of significance.

You know, he’s beaten Brady before on the biggest stage. That took place when he was the coordinator of the New York Giants’ stop unit in Super Bowl 43 and they had the gargantuan task of dealing with an offense that had scored more points per game than anybody ever had (36.8 per game, to be specific).

The two teams had met in the regular season finale, and in that game the Patriots left the Meadowlands with a 38-35 victory. Spagnuolo had not shown his whole defensive playbook at New England, in the hope he’d be able to employ it later.

Obviously he did, in the “Big Game.” And the results have gone down in history.

The Pats were held to 274 net yards, and Brady, who had thrown a record 50 regular season touchdown passes, averaged just 5.5 yards per pass attempt and was sacked five times. In the process, that ruined New England’s undefeated season. so you might say the guy they call “Spags” knows a thing or two about preparing for the “G.O.A.T.”

And with last year’s victory over San Francisco, Spagnuolo earned the distinction of becoming the first coordinator to win a Super Bowl with two different teams.

Looking at the Super Bowl 55 betting odds, as they are posted at BetOnline, the Chiefs are the favorites, on Tampa Bay’s home field (kickoff time 6:30 PM ET on Sunday):

Spagnuolo’s pass-rush in SB XLIII was able to get pressure on Brady, coming up the middle and taking him off his “mark,” thus forcing him out of the pocket. New England ran an offense that was based very much on rhythm, and they were missing a beat.

Of course, everything is relative, and so you might be asking yourself whether the likes of Chris Jones and Frank Clark will be able to do the same thing against Brady in this game. The Tampa Bay offensive line did a real good job in protecting their $30 million quarterback this season, allowing only 21 sacks. So being able to harass him is not going to be child’s play. What has probably made the effort by the Bucs even more impressive is the fact that Tampa Bay’s offensive scheme calls for longer routes, and generally they require more time for the quarterback to throw while they are developing.

That is also something that, if the Chiefs do a good job coming off the ball, they could use to their advantage. This is a little bit of a different situation than Brady had in New England, where he threw a lot of short passes. Something we will emphasize as we continue to write about this game is that Brady averaged 9.1 “air yards” per attempt, which represents the average distance his passes went beyond the line of scrimmage. That was the highest figure of any regular starting quarterback in the NFL. And that is a reflection of the way Bucs coach Bruce Arians likes to conduct his aerial game.

And there is no question that even though he can throw to his running backs or his tight ends, like Rob Gronkowski, it’s going to be Brady’s wide receivers that carry the day. He has some good ones, and that group will be even better if Antonio Brown (knee injury) can play. It should be noted that the Chiefs were a so-so 19th in the NFL in Sack Percentage for the season. But it also needs to be mentioned that Kansas City gave up 2159 yards to wide receivers in the 16-game regular season, which was the second-lowest figure in the league.

You won’t believe all the props you’ll see from BetOnline for the Super Bowl; take a look at the website and see for yourself…………… If you’re not signed up already, you can participate in freeroll poker tournaments where the top 100 players will come away with a $10 Sports Freeplay……And there are the $5,500 Props Predictor and the $5,500 Score Predictor that you can get involved with free as a customer! Also keep in mind that you have every conceivable way to be involved, including the cryptocurrencies like Bitcoin – it’s easy, so open your account NOW!

GET YOUR SUPER BOWL LV DEPOSIT BONUS FROM BETONLINE SPORTSBOOK