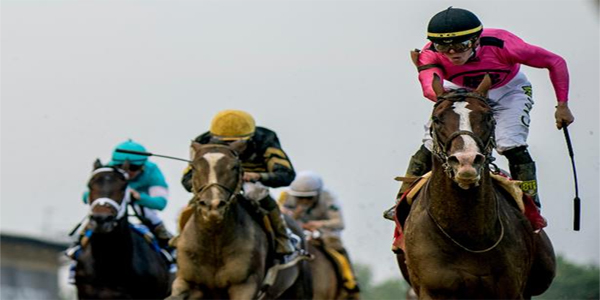 The Sunshine Forever Stakes looks to be the highlight horse race of the weekend. The 1 1/16 mile turf race takes place at Gulfstream Park and features War of Will and the team of Mark Casse and Tyler Gaffalione that was victorious in the Preakness Stakes at Pimlico Race Course during the 2019 Triple Crown series.

War of Will isn’t the only legitimate contender in this year’s Sunshine Forever Stakes, which features a very strong field for the 4:29 p.m. ET post time during the 12-race program on Saturday May 9.

We should be a week removed from the Kentucky Derby, but we are instead a week removed from two divisions of the Arkansas Derby. Things are starting to come together a bit for the Kentucky Derby prep races over the summer, but our focus here is on horses that are four years old and up. We’ll keep tabs on all the major prep races, so that’s your reminder.

In any event, the Sunshine Forever Stakes has a $75,000 purse and an accomplished field, so we wanted to highlight this one.

Here are the post positions, the horses, trainers, and jockeys, and the odds from the form:

War of Will draws the far outside post for Casse and Gaffalione at 10/1, but Social Paranoia is at 3/1 and Halladay comes in at 4/1 as Todd Pletcher has two excellent contenders in the field. Admission Office is the 5/2 favorite. Just Whistle will enter the field if the race is run on dirt. The MTO stands for “Main Track Only”.

Only Social Paranoia and Halladay are coming off of wins. Social Paranoia took down the Appleton Stakes, a Grade 3 race at Gulfstream back on March 28. That was with Florent Geroux in the mount. Edgard Zayas will be in the irons this time around. Maybe the fact that Saez has opted to stay on Halladay is a sign of the veteran jockey’s preference or maybe he just wanted to keep things consistent.

Halladay is a pretty safe pick to be part of your exotics or even for a crack at a win. Since his transition to turf back on September 22, 2018, he’s finished off the board once and that was a fourth-place finish in the Tampa Bay Stakes in February. He bounced back with an allowance win last time out with Saez in the mount for the first time. Previously, Halladay had the Pletcher/John Velazquez combo that we’ve seen so many times before.

Aside from that fourth, Halladay has four wins, two seconds, and two thirds in his turf career.

Social Paranoia finished second in his turf maiden back on August 25, 2018 and has run in stakes races ever since. The interesting thing about Social Paranoia and the interest in him this week is that his Appleton Stakes win was his first stakes victory. It came at a distance of one mile, which is shorter than this race and shorter than his previous six races.

Like Halladay, he’s consistently hit the board, but unlike Halladay, he hadn’t gotten a win. That was his four-year-old debut, so maybe he’s made a turn for the better. Previously, Social Paranoia’s claim to fame was a good second-place finish in the Belmont Derby on July 6, 2019.

That race was run with Manuel Franco on the mount. The win in the Appleton came with Geroux. Now he has another new jockey in Zayas.

War of Will is going to get a ton of attention this week for the return to turf. This ends a string of 10 straight turf races for War of Will, who ran nine times as a three-year-old last year. This is also his first race since finishing ninth in the Breeders’ Cup Juvenile Turf. His turf career seemed to end with a fifth-place finish in that Juvenile Turf race, but the timing of the return to the inner track is rather interesting.

Casse believes that War of Will was bred for turf. His sire, War Front, is also the sire of Halladay. If that is truly the case, wouldn’t the horse that’s been running on turf make more sense?

Brian Lynch isn’t a high-percentage trainer, but he has a high-percentage rider in Joel Rosario atop Admission Office. The son of Point of Entry hasn’t won in a while, but finished second to Zulu Alpha in the Mac Diarmida Stakes back in February. You may remember Zulu Alpha as the winner of the Pegasus World Cup Turf Invitational at Gulfstream on January 25.

Admission Office was 11/1 in that race and wasn’t good enough to beat Zulu Alpha in the sprint to the finish, but only lost by a length. He was second to Instilled Regard in the Fort Lauderdale Stakes last year. Instilled Regard was third the next time out in the Pegasus Turf. The speed figures have been good. The seconds and thirds have been to excellent horses. Perhaps this is the breakthrough race. Perhaps Rosario is the difference maker. He’s the 5/2 favorite for a reason.

We’ve got a lot of speed in this race. So much so that El Tormenta, who has had some huge speed figures in his career, is an afterthought at 12/1. His Appleton Stakes effort was his worst race in a while, so he could be in a bounce back spot for Dylan Davis.

Rather than El Tormenta though, Aquaphobia looks a little more appetizing with Irad Ortiz Jr. in the mount. This is the third race with trainer Mike Maker and Aquaphobia has a win and a fourth on the turf. Ortiz had an excellent ride on Hawkish on the turf last year in the Appleton, but he assumes the Aquaphobia mount in this one.

All of that considered, the Pletcher horses are on my card here. I’ll look up Halladay and Social Paranoia to finish 1-2 in any order with a nice exacta box. If War of Will beats me, so be it, but he won’t be on my card with the long layoff and the turf return. I’m also going to skirt Admission Office, who is a promising horse, but just hasn’t won enough for me, particularly in stakes competition.